Wellington in India, in the Peninsula and at Waterloo 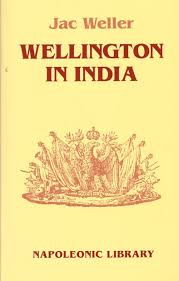 Huzzah! At long last I have finally tracked down a copy of the first in Jac Weller's Wellington trilogy - Wellington in India.

I had a copy of Wellington at Waterloo which was swiftly followed by Wellington in the Peninsula. Both of these are first rate works and so, initially more from curiosity than a major interest, I was keen to track down the first volume. Ironically I had picked up the Kindle version during one of Amazon's periodic sales for the paltry sum of £1.19. For sure though, I wanted a hardback version as as I already owned the other two volumes in the Greenhill format it made sense to find a similar edition.

My knowledge of the period of when Wellington was in India is a little hazy, to say the least, but since I have a long standing interest in the wars of the Indian sub-continent it is a knowledge gap that needed filling! I am sure that Jac Weller's book will go a long way towards that. In later life the Duke, when asked what the finest piece of work he ever did on a battlefield simply replied -  'Assaye'. That anecdote alone piqued my curiosity about this stage of the Duke's career. 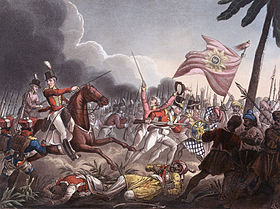 At this stage I cannot see myself gaming the period - the same can also be said for the 'Clive of India' era - but It certainly has everything I look for in a campaign - smallish forces and an exotic location to fight over. It would be 'doable' from a Portable Wargame perspective but sadly is not on my immediate horizon.

I must confess that recently I have been looking long and hard at the campaigns of the Revolutionary Wars and the British involvement therein. I always had a fondness for Napoleon's Egyptian campaign which would make for a great Portable Wargame style set up.

This brought back memories. My copy has been sitting on my shelf since 1972 (it cost £5.80 which seemed a lot of money then). Still, it does have a much prettier cover showing the battle of Assye - a different image from your illustration - apparently from "The Wars of Wellington" by Dr Syntax, 1819; a book I've never come across before (and don't want to read as it is a "narrative poem") but it does seem to include lots of interesting engravings.

I was a little surprised by your "At long last" comment as there always seem to be used copies being sold on Amazon Marketplace, or are you a traditionalist who likes the thrill of the hunt through real book shops, plus the chance of a good bargain? I actually bought a Kindle copy a year or two ago when they did a deal on this and "Wellington in the Peninsula" at 99p each(seemed too good a deal to miss as I could take them along as holiday reads, and the Kindle copy has yet another cover variant).

You are absolutely right about the ‘thrill of the hunt’ as this version seemed to be quite hard to get a hold of. There are paperbacks aplenty but never this version when i wanted to buy it.

I have seen the cover you mention but as the other two I have are the Greenhill version it made sense getting the same version.

The strange thing is I have the Kindle version of India and the Peninsula (as I recall they were both 99p and not £1.19 as mentioned erroneously) but not Waterloo. It would be good if that became available as it is a very good account of the battle.

Hmm, I have always been interested in this little foray by Arthur Wellesly

The Duke learned an awful lot about logistics here that stood him in good stead in the Peninsula. I have a soft spot for the British in India during the formative years of 'the Jewel in the Crown' and so this is welcome addition to the 'never-in-a-million-years' project list....:-)

Well done Sir. It’s a cracking book. I’ve written a CCN scenario for assaye if that would be of any use to you.

I would very much like to see that old chap! If you could ping it to the usual email that would be peachy.

I hope all is well in the Kinch household and that the offspring and the peerless Mrs Kinch continue to thrive.