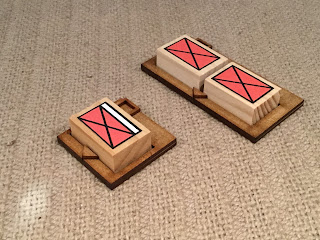 The assembled bases. The larger of the two is 3” by 1 1/2” whilst the smaller is 1 1/2” square. Note the raised triangle along the leading edge in the centre - this denotes the unit facing - and the dice frame along the rear edge. The dice frame will be to denote the strength of the unit. I intend placing a strip of steel paper along the space by the dice frame so that an identification label can be added as required depending on what the blocks are being used for.

Had things gone to plan today would have been the third day that Laurel was in hospital and I suspect I would have been ‘hither and thither’ on one domestic errand or another or, more likely, ‘fretting and fussing’! The postponement of her operation has, in effect, given me in effect a couple of spare weekends - spare being relative of course as the usual weekend domestic round still needs to be maintained - or, more accurately, some spare time of my own.

I have not been idle. There has been much parcel packing accompanied by the inevitable ‘thinking of great thoughts’ as well as some long outstanding modelling tasks attended to.

I have decided to split the final ACW ships into two batches - mainly because the first four models are pretty similar in construction - as it makes it rather more manageable to fit in the construction into the odd moments that become available during the day. This in turn gave me the opportunity to see what bits and pieces I need to order from Warbases by way of replenishing my stock of hull components. I also need to get some 7mm d6s for use with the movement trays you see above which I finally managed to get assembled. 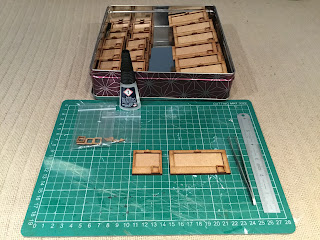 Built at last - 30 of each size. The idea behind this is that I can use less blocks to represent a unit meaning that some can be freed up to be repurposed in additional colours.

I am really excited about these trays as it means that using the block armies on a non gridded playing surface is viable. Originally I planned to have two sets of these - one verdant and one desert coloured - but am now thinking that having just a single set in a neutral dusty earth shade would work for both setting. I could even leave them as they are but that option does not really appeal!

I also took another look in the Command and Colours Samurai Battles box and am looking forward to getting it ready for the tabletop.

Finally, I reorganised some of my rules folders so that the Balkan naval war supplement for David Manley’s Broadside and Salvo and the PDF of The First Balkan War 1912 - 1913: The War at Sea by A. J. Martins are all in one place. I also now have a second folder for the ironclad era - one containing David Manley’s Dahlgren and Colombiad and the ACW campaign supplement whilst the second contains the supplements for the Lissa campaign, the Boshin War, the Russo Turkish War and the War in the Pacific. My printed copies of the rules for Air Force, Dauntless and the Expansion set together with the rules for Axis and Allies: Angels 20 and all the in house stuff I prepared for them, especially around crew quality and pilot/aircraft special abilities are all now in a new folder as well.

Individually these are small ‘wins’ but they are wins nevertheless and so should be savoured as such.

All in all then, not too bad a day despite the dreadful weather!

I'd forgotten how nice your blocks look and how effective the tray are. Looking forward to seeing them finished and hopefully in action at some point:)

Very effective dice trays/bases. They have a professional, purposeful and pleasing look to them.

Thank you old chap! An unexpected benefit of the movement trays is that the blocks ‘sit’ some 3mm into them This has the effect of making them a little less prominent on the table top. I am really pleased with how these came our and Warbases did a sterling job on them.

Now all I need to do is find some time to make use of them!

They certainly set the blocks off nicely and will enable me to experiment more effectively with non grid based rules.

You are absolutely right! This is just one f the things I had lurking in the background that I can now tick off the list (at last!)

Those Kriegsspiel blocks are very elegant and practical - look forward to seeing a game.

They have seen a lot of action over the years but as yet not using the movement trays. I hope to rectify that soon if I can!