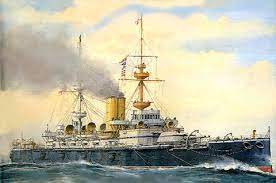 Although I am some while away from actually building any models for the pre dreadnought era (I am calling this c.1885 to 1905) it does not mean that I have not been giving some thought as what I will be doing and how. I have made some preliminary sketches for some bits and pieces that Warbases will be cutting for me - mainly turrets and superstructure parts - and decided that the models will be built using my usual technique of layered MDF. I have also been giving some thought to the rules.

It is my intention to draft a set of rules covering the pre dreadnought era based on the ironclad version currently being tested - and these will also include a 3 x 3 option. In theory I can see little problem with this approach although the one thing that struck me was the potential for a serious amount of dice rolling. I have no issue with this and given the number of models I envisage using - probably no more than half a dozen or so per side - it would not be too onerous. Besides, using opposed dice rolls certainly adds to the ‘fun factor’ although I suspect some purists will sniff rather disdainfully at the notion!

Taking a modern pre dreadnought armed with 4 x 12” in two turrets, a dozen 6” and perhaps the same number of 3” for anti torpedo boat work, you have the potential for at least four sets of dice rolls (and the associated defensive rolls as well) being the two main turrets and half each of the secondary and tertiary guns. One of the key features of naval gunfire of this period was that everything fired as soon as it could which was why there were problems observe ‘what shot landed where’ from the forest of assorted sized shell splashes. I have no problem with this and certainly, rolling vast numbers of d6 when playing Axis and Allies: War at Sea was not a problem.

Many years ago I fought a vast number of actions using the set you see below. At the time I was using a 1:3000th scale French Navy which had some wondrously odd looking vessels in it. The rules worked well enough for the early part of the period but suffered when ships mounted more and more artillery - the firing system really bogged down and so I will be keen to avoid this with my own effort. That being said we had some cracking games with them! 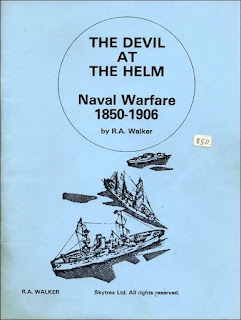 A great set of rules but very much of their time. Very detailed and slowed up significantly with later ship types - definitely a challenge tackling something like Tsushima with them! 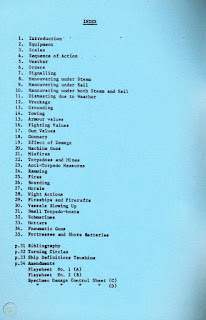 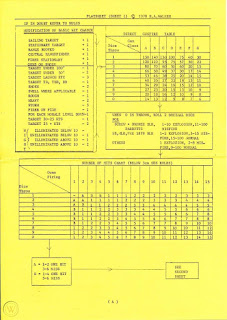 ….and one of the play sheets. Despite my comments to the contrary these were a good set of rules and indeed, I would be keen to get a copy if I could, if only for nostalgic reasons!

My plan is to build models that would ordinarily be ‘second string’ types rather than the latest units to enter service. This will mean older battleships, even rebuilt ironclads or those vessels specifically designed for overseas or colonial use. Many of these soldiered on (or should that be sailored on?) until the Great War and whilst no match for modern vessels would certainly be sufficient when engaging similarly aged and decrepit types!

I plan to build British and German types along with Turkish, Russian and French and whilst this looks like a huge undertaking the individual nationalities will be relatively small - I am thinking ten to fifteen models  at the most. There is also the question of pain schemes as well - pre dreadnought black hulls, colonial service white hulls or overall grey. Something else to consider anyway.

There is much to ponder over this project before I ‘pull the trigger’ but if I have learned anything over the last few undertakings it is the value of preparation! Before I get it though, the ACW needs to be finished, as does the Russo Turkish collection.

Woohoo…at last. Make sure I’m at the front of the queue when it comes to selling any of these ships. Watching the development of this very closely.

It will be a while away yet but there is no harm in making a few small arrangements for when I do pull the trigger.

I will let you know for sure!

Early days yet but you know that when you get that itch it will need scratching at some point!

It certainly is BUT, the plan is very much ‘bite size chunks’ based so I would look to tackle matched pairs of combatants and bear in mind that each nationality will have a selection of torpedo boats - which will be really easy to make - to make up their strength.

As an aside the Turks will be getting some of the rebuilt versions of the models from the Russo Turkish set up - which I already have most of the material for.

It will be fun for like I said, it is a while away yet.

I'm looking forward to it. It will fit in nicely with an idea I've been playing around with for a long time, Diplomacy as the foundation for a wargames campaign. With it and the 3x3 rules it might be possible.

Ooh I like the sound of that Mark. Great idea.

Diplomacy as the basis for a 3 x 3 campaign? Where do I sign!? I reckon that is a cracking idea!

I need to get to the pre dreadnoughts first which means that the ACW and the Russo Turkish collection need finishing first.

I think he may be on to something!

All I can say is that plans have been planned, schemes have been schemed and thoughts have been thoughted….

Q4 of this year methinks unless….