The Return of the Desert Loving Englishman 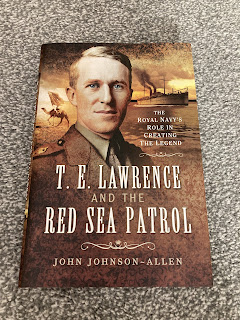 A fascinating read about a sideshow of a sideshow of a sideshow….
It is funny how an idea can morph into another idea which in turn veers off elsewhere - and then comes back virtually where you started!
This will be the last post on the subject of my planned Portable Pre Dreadnought Wargame - not because I have abandoned the idea - as I have gone as far as I am able to at present. I have designed the bits and pieces I will need from Warbases and so these will be ordered so that when I am good to go all the proverbial ducks will be in a row, at least as far as building the models is concerned.
Calling the rules the Portable Pre Dreadnought Wargame is a little bit of a misnomer really as I fully intend for the core system to be usable up to the Great War but with a fairly significant caveat. I am not sure that the firing system will work effectively with dreadnought sized main batteries - there are limits to the number of d6 one can roll comfortably at any one time! I fully intend looking at the lower level of action - cruisers and smaller - which will make for far more tactically interesting games than endless lines of dreadnoughts duking it out, not that that isn’t fun in itself.
Some time ago I mooted the idea of an expanded Madasahatta style campaign which would loop in East Africa and the Arabian peninsula. At the time I even went so far as to acquire the models in 1:2400th from Tumbling Dice - sadly long gone - but I never followed the idea through. Well, after a bit of a rethink, and more significantly a degree of scaling the whole project back a tad, I reckon it is now far more viable. Besides, I want to build the models myself.
The Royal Navy in the Red Sea
The Royal Navy Red Sea Squadron played a major part in both supporting the Arab Revolt and preventing supplies being delivered along the coast in regions occupied by the Turks. They had little or no opposition to speak of - the Turkish navy was concentrated in Turkey - which was probably just as well given the calibre of what they were equipped with. However, by dint of some historical legerdemain we could allow a combined Turkish and German squadron to be maintained on the island of Madasahatta and Dar es Salaam.
My plan is to assume that the Central Powers have a greater naval presence than historically and that elements of both the Turkish and the German navy are available. For the Germans I am thinking some of the East Asia Squadron (they went west rather than east!) with some older bits and pieces facing off against the Red Sea squadron and some other bits and pieces that the Royal Navy happen to have kicking about - including stuff from the China station and perhaps a dash of modern light cruiser.
For this to work I will have to take a piece of wargaming history (Madasahatta) and tweak it - just to be clear this will mean taking history and also an alternative history to make something new - but I reckon that there is definitely some mileage (or for something naval should that be Knotage?) in it.
To give you a flavour of things take a look at some of the ships of the Red Sea squadron.
H.M.S. Euralyus
H.M.S. Fox
H.M.S. Minerva
H.M.S. Clio
H.M.S. Espiegle (note that R.I.M Minto was similar)
H.M.S. Odin
And from the Royal Indian Marine
Dufferin
Northbrook
Hardinge
The above were used as troop and supply ships that were also fitted out as armed merchant cruisers.
All the above are very much Arabian peninsula facing so the whole East Africa set up will also need looking at and organising.
Forward thinking
There is a huge amount of potential with this idea and it would certainly give me a great variety of lower level actions involving fewer ships as well giving me plenty of ideas for models. Given that Madasahatta is also relatively close to French occupied Madagascar it means that the potential for adding in some French vessels is also viable.
As I have often said in the past and will no doubt continue to do so in the future - much to ponder methinks!
Posted by David Crook at 17:12