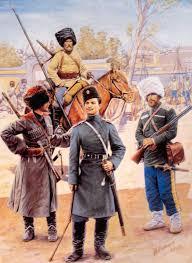 Now you probably wont have seen this one coming and to be honest, neither did I! A chance conversation at the club on Wednesday has put me firmly on the path towards acquiring a pair of small forces in 15mm for use with my various Command and Colours/Memoir of Battle ideas - not only for use historically but also for imagi-nation purposes. It is no secret that the Balkan Wars have featured often, both in my thoughts and also via various actions fought on the blog and so you could be forgiven for thinking that that would be my preferred option. Up to a point that is certainly the case - at least as far as the Turks are concerned - but it is not the whole story. My decision is one of convenience rather than strict historical accuracy but then hey, why let history get in the way of a good wargame?

I am going to raise two small historically based forces representing a pair of adversaries that have fought one another on numerous occasions over the centuries and are both large enough to allow for varied troop types, assorted allies and also a reasonable naval side. The armies are small in terms of the figure count but large enough for all the actions I would plan to fight - especially for the Command and Colours option. I am thinking around 80 foot figures, 15 or so mounted and three or four guns with a couple of MGs for good measure. I shall be organising the forces as per the unit sizes in Charge and with all the figures being  individually based.

The armies in question are the Turks and the Russians from around the 1900 - 1905 era and the figures will be those from Irregular Miniatures. Balkan Wars Turks and Russo-Japanese War Russians are the ranges of choice at the moment and I have plenty of uniform material for each - well at least I have an Osprey title on each war which will do for a start!

The chance conversation I had was along the lines of cheating somewhat in the actual acquisition of the collection - basically I am going to be paying someone to paint these for me as I have realised that I am kidding myself if I think that I am ever going to paint anything remotely organic again!

I want to do this simply because I like to to see painted figures on the tabletop and as much as my block armies are great fun to use they will never have the visual appeal of models. My aversion to painting figures has made a virtue of necessity as far as the blocks are concerned and I will happily carry on using them - they have given my own enjoyment of our hobby a much needed boost and have taken me in directions I never would have considered otherwise.

Interesting?? I painted up a ton and a half of Irregular Ruskies for Posties Russo-Jap War. Looking forward to seeing the figs!

It will be a while before they appear - I have yet to buy them for one thing - but they will be on the blog when they do!