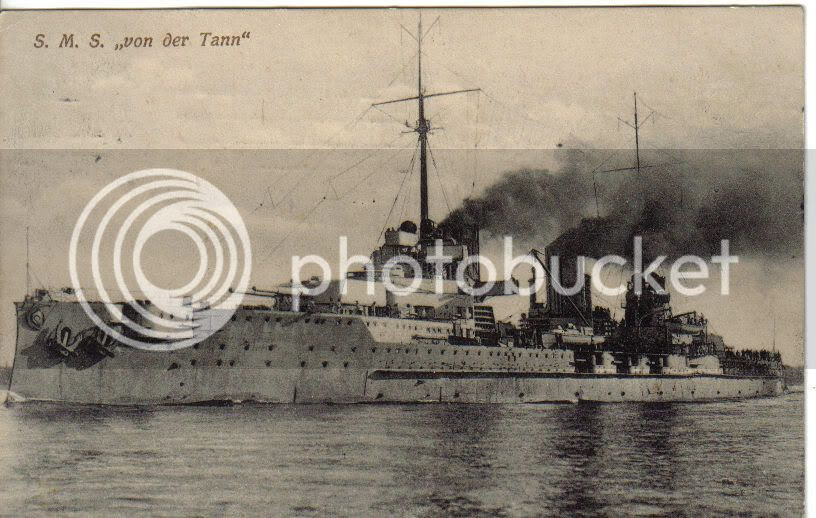 The drafting of the Jutland play sheets is going pretty well although they will be rather larger than the two sides of A4 I originally intended. the reason for this is very simple - in my opinion the original design was not particularly well laid out and the ship damage charts, although at first glance look pretty comprehensive in terms of what they are used for contain a number of omissions. I had thought to include all the relevant data on the version I am drafting but that is a little on the unwieldy side. I have a couple of ideas around this so will post them once I have played around with them a little.

A more significant problem concerns the number of gunnery boxes a Capital Ship has (a Capital Ship in this game is anything armoured cruiser sized and larger). When I spent some time messing about with these rules a while ago I based all my findings on the data shown for the ships of the Royal Navy. For example, HMS Warspite has 12 gunnery factor boxes. Given that she was armed with 8 x 15" this works out that each gun is worth 1.5. The standard that appears to have been used is for a single 12" gun being represented by a single gunnery box so, for example, HMS Dreadnought will have 10 such boxes. I was then able to convert other calibres into boxes by the simple expedient of using a multiplier applied to the number of barrels. I then went ahead and calculated a whole host of ship data cards on that basis. So far so good.

Then I looked at the German ships - and it all went horribly wrong! Take for example the battle cruiser SMS Von Der Tann. She was armed with 8 x 11" guns yet in the game has 10 gunnery boxes. The first German dreadnoughts - the Nassau class - were armed with 12 x 11" of the same type of gun as the battle cruiser ( the '04 45 cal weapon rated by Janes as A5) and yet only have 12 gunnery boxes. This effect was repeated throughout the High Seas Fleet in the game. in fact, the only ships that have the correct number of boxes for the number of guns carried are the aforementioned Nassau class and the pre dreadnoughts.

In a way this has helped me out because I have no idea as to why the number of boxes should be different (excepting for weapons of a larger or smaller calibre) so I will go with the system I am working on (one of my 'tweaks') as at least I know it will be consistent. I am going to deiate from the numbers used in the game for gunnery factors as I want to use a 'one hit box for one barrel' approach. Variations in calibre will be accomplished by the use use of column shifts when firing so taking HMS Warspite as an example, she has 8 x 15" so would ordinarily fire on the 7 to 8 factor column. She will get a two column shift to the 11 to 12 column and roll for hits accordingly. The column shifts will be included in the ship data card.

The game lumps gun calibres by ship type and so this is the approach I shall adopt with the categories being BB, BC, B, CA, CL and DD.

The protection value of the ships appears to be based on the maximum thickness of the belt armour which again I shall use as it will be uniform. For all the factors I apply, including ship speed, I will be using a combination of Conways and Janes so will be on pretty firm ground as far as accuracy is concerned.

On with the typing then!
Posted by David Crook at 16:32

Think you are onto a winner there David.

One over, one under, next one on target!!

I thought so but have just hit a minor snag which will feature in the next post. Don't worry, I have managed to solve it!