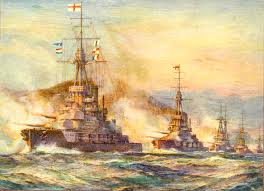 Jutland 1916 - this image is from a Christmas card!

It has been a funny old day. I have spent most of the morning on my usual job hunt - making phone calls and checking the internet - and acting as occasional waiter for my son who is still feeling pretty grim (and will do so for a while yet). At the time of writing we are waiting for the Police to call for all the statements etc for their investigation. It all feels all very 'limbo-like' at the moment and I will keep you all posted on the progress as and when anything transpires. Continued thanks though to everyone for their kind words and thoughts.

In the meantime though, and as a very welcome diversion, I have continued with work on my Jutland project.

I should clarify at this point exactly what I am actually trying to do - namely use the game system from the original version(s) of the game (1967 and then 1974) for naval wargames set during WW1 or effectively 1900 to 1920. In order to do this I am essentially distilling the numerous magazine articles down into the original rules. My own involvement will be kept to a minimum, simply because the original system was designed around, in my opinion, very sound principles.

My first step is to prepare a playsheet as the original game never featured one. I have nearly completed this for the tactical rules and am hoping to try them out over the next few days with the ship blocks I prepared earlier. I will try the game out using the original rules before I start changing anything but at this stage I am only expecting to adjust the ranges. Ironically my plan is to use the same maximum range as Paul Hague in his Sea Battles in Miniature - 40" or 20,000 yards.

Once I have reacquainted myself with the rules and system then the 'tweaking' can begin in earnest.

Then of course there is the question of the models. Given the potentially wide-ranging nature of what I am planning - far beyond the chilly confines of the North Sea - I suspect that 1/3000th will be the scale of choice, simply due to the sheer amount of choice available from Navwar.

Since you are looking at 1900-1920 naval combat might I suggest that a good "test battle" would be the Russo-Japanese War Battle of the Yellow Sea (1904)?

The six main ships of the two combatants are relatively evenly matched . . . and then you can add in all of the smaller vessels as well if you like.

Sounds like things are coming together for Jutland.I am working on a scenario for ship to ship encounters and fleet battles on a large scale. We need to compare notes ... Jeff
P.S. I continue to pray for your sons recovery and Justice!

Nothing says Christmas like a salvo of 13.5" armour piercing shells does it!

Funny you should mention that because I was recently looking at the Tsushima variant for Jutland - for which I have all the counters and ship charts.

One to consider for sure.

Happy to help sir! Many thanks for the thoughts and good wishes for my son - much appreciated.

Jutland is coming along rather well if I do say so myself.

I prefer the 15" variety for some real seasonal cheer!

I just knew you would be the one to remind me! Seriously though, this is in a slightly different way to the original Balkans kit (I was not happy with the paint job for one thing)so is therefore completely justifiable....;-)

Son is improving although still feeling pretty sore and hard done by. The Police are over today so the detection process is under way.

Hi David. I went with 1/3000th for my (very small) Great War naval collection. I thought that the breadth of ships, cost, ground scale and ease of transport (a destroyer flotilla in a large matchbox, etc. etc.) made really good sense. Every now and again I am tempted by the larger scales, especially for small flotilla actions - but I think with the larger scales the groundscale perhaps only really works well with night and coastal actions. That being said, I am far from an expert in such matters - so feel very free indeed to ignore me!!

It's also great to know your son's on the mend slowly. Fingers crossed he's up and about soon. Very, very best wishes.

Many thanks for the good wishes re my son - he is on the mend but still looks very forlorn. The Police are around today so hopefully some progress wil be made.

1/3000th is the only viable scale for what I want to do with this idea and as I only live about 30 minutes from Navwar I can easily pick up what I need.

I agree about the larger scale as well - I would need a lottery win for what I wanted!