A Father's Day Gift or two 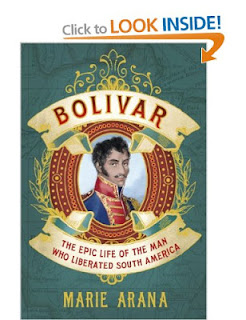 One to savour and for the South American section of the library - needless to say there are some cunning plans afoot for the period....


A late post to be sure, but certainly one worth mentioning. I was spoilt rotten by the offspring for Father's Day with chocolates, jaffa cakes, a CD and some smelly stuff from my daughter and a very welcome Waterstone's gift card from my son.

It is a well known and curious phenomena in that I am incapable of hanging on to a Waterstone's gift card for anything length of time. As soon as I get one I have this lemming-like compulsion to use it as soon as is humanely possible. Yesterday proved to be no exception with the acquisition of the above title.

Bolivar by Marie Arana (ISBN 978 0 297 87026 5) is a new biography of 'The Epic Life Of The Man Who Liberated South America' and certainly the 'Epic' nature of his exploits is a subject of great interest. As mentioned, I have a small library on the subject of the South American wars of liberation but was missing a biography of Simon Bolivar so this gap has now been filled. In my opinion, anybody that has a country named after them must have a tale to tell.

In terms of gaming the wars I would probably look no further than a DBA/HOTT style set up which has already been tackled by the legendary Kaptain Kobold's Free Stuff. I have no idea when I will tackle this particular period or even in what scale but I will get around to it at some point - it is just too entertaining and exotic not to!

Having said that, I have a couple of notions to consider....
Posted by David Crook at 06:22

Below is a link to a South American Naval Hero who you might not know of.

I once played him in a play in Monterey, California. He once captured that city (which was the capital of California at the time).

Anyway, with your interest in things naval and South America, you might well want to learn more about him:

Many thanks for the heads up re Bouchard - it makes for a fascinating read and with much inspiration for the gamer.

I had no idea you had theatrical inclinations - I only hope your costume was suitably resplendent as befits a senior officer of the period!

It has 'game me, you know you want to' written all over it!

It is a really good read by the way!

I have a very extensive theatrical background. I've performed in over 230 productions (over 40 Shakespearean productions) as well as in a number of operas (in non-singing roles).

Wow! That is seriously impressive! How on earth did you find the time?

I have more information over here if you are interested in this period:
http://orinoco-miniatures.blogspot.cz/

All the best,
Mark

Many thanks for the heads up! I will enjoy taking a look through these and no mistake.