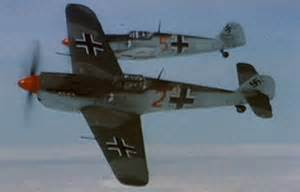 The Spanish aircraft being used as a 109E in the film The Battle of Britain - I am planning on painting four of these in the above colour scheme.

I have gone and done it. I have once again executed a very slight change of course in respect of my Axis and Allies 1/100th scale WW2 aerial collection.The Middle Eastern project is most certainly still on the to do  list but I am tweaking the aerial dimension slightly - mainly because I have fallen victim to the dreaded 'revisited project syndrome'.

This came about quite by accident and was caused by a visit to our local boot sale. I picked up a copy of the book Spitfire Ace - the book of the TV series on Channel 4 some time ago which completely passed me by. This is a really interesting book about a very familiar subject - flying a Spitfire during the Battle of Britain. It is full of anecdotes and covers much in the way of pilot training and such like, the evolution on tactics and what it was actually like to fly one in combat. Nothing new then, just very well presented and I am afraid I was bowled over by it.

I shall be revisiting the Battle of Britain in respect of my Axis and Allies WW2 collection simply because it is one of the periods of history that is ingrained in my DNA and so it would be churlish to ignore it. The end result will mean my aircraft collection will be slightly larger than planned - it also means that the Turkish Air Force might have to do without any Hurricanes....Oh well, P40s it is then....;-) 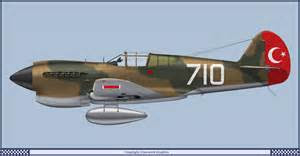 A Turkish P40 - the markings look fairly straightforward although the crescent and star on the tail may be a challenge!