July is....World War 1 Naval Month! (With thanks to Steve Blease for the idea!) 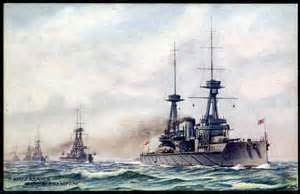 OK then - here's the plan. I am going to get the 1/2400th scale WW1 British and Germans ready to to use by the end of July - actually 26/07 as I am away from 27/07 for a week. I am cheating ever so slightly in that I have decided to use the Paul Hague Sea Battles in Miniature approach in terms of the number of ships I shall be completing. Basically, he uses one capital ship to represent two - which is fine where the ships are built in multiples of two, less so when they are singles or threes and fives. For the record this will still leave me with some 27-odd dreadnought sized warships to paint with some 64 or so light cruisers and destroyers.

The rules are very close to being ready for a first play test and so I am also beavering away at getting the draft ready. I suspect that our old friends Fezia and Rusland will be making an appearance for this but ideally  it would be nice to throw some dreadnoughts around.

I can feel that old shiver of anticipation coursing through my veins....;-)
Posted by David Crook at 21:07