I actually fought this game some time ago but for various reasons never got around to writing it up. Sadly the exact order of battle is missing but the scenario was loosely based on the Siege and Relief of Chitral. The game was typical of many of the Colonial 'isolated-garrison-under-siege-waiting-for-the-relief-column-to-arrive' actions fought around the world and whilst it was great fun to fight changed its perspective very early on in the action.

The scenario consisted of a small Imperial garrison holding a fort surrounded by revolting Afghans - mainly the fearsome Jalfrezis under the command of their fearless leader, Ram Ditin. The relieving column, comprising some of the Empire's finest from the garrison at Dovecot, had to pass to the very end of the Roghan valley in the face of hordes of hidden tribesmen, determined to stop them.

The game was fought using Bob Cordery's Memoir of Battle rules and, as ever, was huge fun to fight.

At the Northern end of the Roghan Valley.... 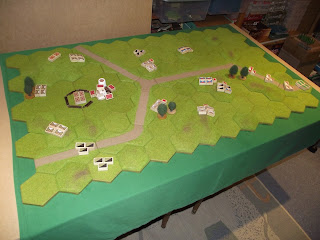 The start of the action. The fort on the left of the picture is overlooked by a series of low hills full of fanatical tribesmen. The track leading away to the right is the approach road from the garrison at Dovecot and is the moset direct route to the beleagured fort. The Jalfrezis have taken up ambush positions in the hills to stop the Imperial relief column. 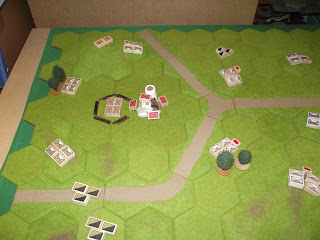 Surrounded and overlooked in every direction the outlook for the small force of Imperial infantry is grim unless help arrives before the impending Jalfrezi onslaught. 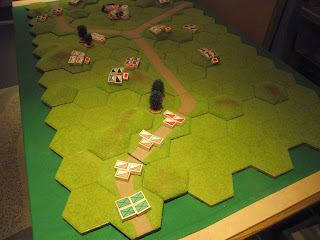 With the cavalry in the van the Imperial forces start down the valley to relieve their comrades, oblivious to the hdden threat stalking them in the hills.... 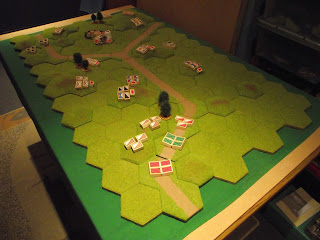 Taking every precaution the Imperial cavalry scout the hills alongside the dirt rode whilst the infantry continue their advance. Meanwhile the Jalfrezis bide their time.... 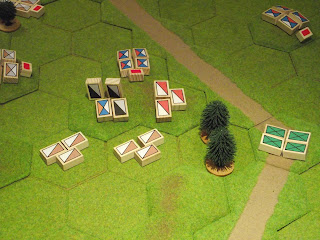 Contact! With a fearsome warcry the Jalfrezi horseman, with Ram Ditin in the front rank, crash into the ranks of the Malabar Lancers but are bested by the doughty Indian cavalry. 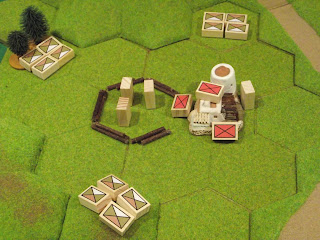 Meanwhile the Jalfrezi assault on the fort commences with the defenders already taking heavy casualties from the dreaded jezzails of the tribesmen. 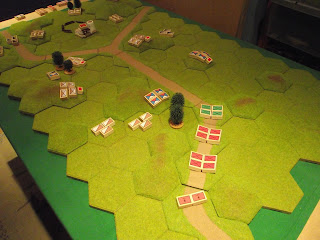 The victorious Malabar horse charge down the hill unaware of the band of tribesman to the north of the small wooded area by the road. Meanwhile the infantry press on with artillery following on. 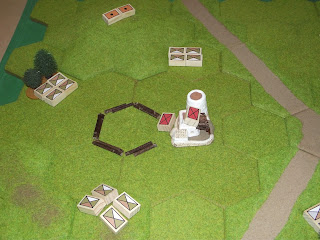 The battered garrison fear the worst as casualties mount and the overwhelming number of tribesmen mass for the decisive assault. Despite inflicting some losses on their attackers the defenders, gallantly fighting to the last, are overrun. 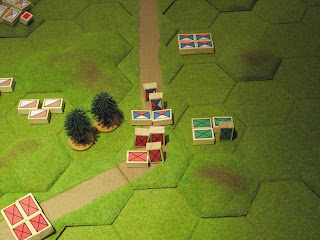 With a screaming battlecry the Jalfrezis crash into the Imperial infantry and a brutal and desperate hand to hand struggle ensues with casualties heavy on either side. 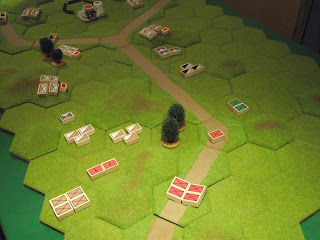 Eventually the leading Jalfrezi units are driven back from the advancing Imperial column. 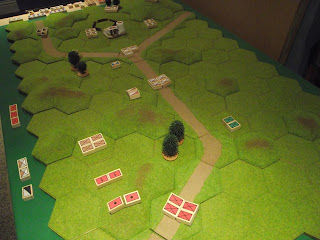 After a brief pause to reorganise the Imperial forces press on to the fort unaware that it has already fallen and their efforts have been in vain. The Imperial cavalry has pushed well forward but comes to grief from long range jezzail fire and support from the Jalfrezi horse and artillery. Meanwhile the Imperial infantry pushes forward with support from machine guns and artillery. 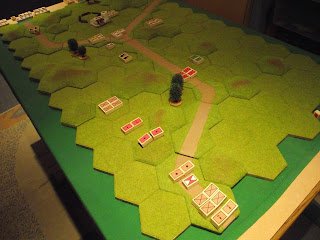 The remainder of the column follows the advance guard into the valley and the commander is faced with a dilemma - should he push on to the fort in a gesture of defiance or withdraw from the valley to make preparations for a large scale expedition? With the loss of the fort the prestige of Imperial arms would be embarrasingly reduced but would it be enough to encourage the wavering tribes of the frontier to raise their warriors under the banner of Ram Ditin? Either way, the tension on the frontier would rise. 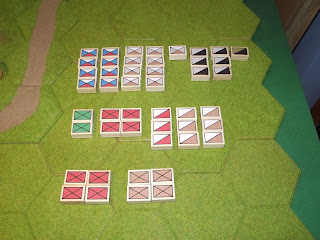 The final reckoning- despite suffering fewer casualties the Imperial forces have certainly suffered a setback with the loss of the fort. The only redeeming feature from the Imperial perspective was the damage inflicted on the Jalfrezis. It was imperative for Ram Ditin to garner suppoert from other frontier tribes to replace his depleted manpower. The same factor would also influence Imperial thinking and so a deadly race to mass troops for the decisive showdown had begun.

The action was fast and furious but the loss of the fort so early on meant that most of the game was really closing the door after the horse had bolted. I suspect this was the reason I never got around to writing it up! I will certainly revisit the Roghan Valley again as I suspect that Ram Ditin is planning his next move against the hated Infidels.....

Meanwhile, the wheels of Imperial retribution had started to turn....

The Empire was going to strike back.

Looked like a good battle and not a bad way to continue the story.

It was great fun to fight and sets the scene nicely for the rest of the campaign (if you could call it that!) - so I will have to give this some serious thought.