D - Day: The Battle for Normandy by Anthony Beevor 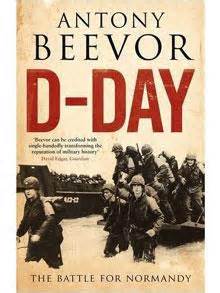 I have owned this book by Anthony Beevor since publication but have only recently gotten around to actually reading it! It has been my travelling companion for the last week to and from work and what a thrilling read it is.

The overall story of the invasion and Battle for Normandy are probably pretty well known amongst the gaming fraternity - even if WW2 is not your period of choice - and so a detailed review of the campaign by me is pretty pointless. The thing that has really captured my attention about this title (and I suspect the more knowing readers of this blog will have their own take on this) is the sheer scale of what almost went wrong/right at key moments for both sides. It is a good read to get under the drain covers of most of the D Day/Normandy 'sweeping statements' usually associated with the campaign.

Many things struck me whilst reading this book such as the sheer level of carnage inflicted on both sides and how quickly formations could be rendered unfit for action due to casualties, lack of supplies and lack of recovery time. I was also surprised by the level of attrition sustained by the British and Canadian forces. Air power comes across as hugely significant but not in the way I imagined - it seems that the Americans got the concept of close air support worked out far sooner than the UK did although the RAF caught up pretty quickly!

Haven't read this one but love his work like Stalingrad and Berlin.

I hope you are well and I am looking forward to meeting up at Skirmish on 22/09 if you and any of the rejects are going!

I enjoyed Stalingard (if 'enjoyed' is the right word) but have yet to read Berlin. His book on the Spanish Civil War - Battle for Spain is really good.

Thanks David
It has to go onto the list then :)

See you there then!

I really enjoyed it and there are plenty of ideas for games large and small contained within its pages.