A Piece of Wargaming Nostalgia 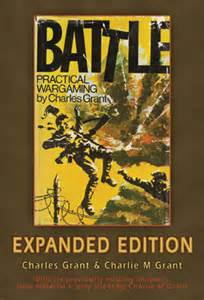 A blast from the past

I expect that many wargamers 'of a certain age' are familiar with the original version of Charles Grant's classic book devoted to WW2 wargames. I have used these rules for probably more games than I can remember back in the early days of my wargames career and to this day I believe they are still a great set of rules. When Caliver Books announced that they were bringing out an expanded edition which includes some 6 chapters that never made it into the original I was intrigued. So intrigued that I decide to buy a copy. I am delighted that I have done so, albeit it with but a single reservation.

I will not describe the book in detail as it is so familiar. The extra chapters are mainly devoted to the effects of terrain and the use of maps and so are very handy for completeness sake. You also get a couple of playsheets for the rules which are rather handy.

The only reservation I have is the price - at £29.50 it does seem a little on the expensive side but I will enjoy it for all that. I recall the author's battle reports therein with some relish and the main thing for me in acquiring this book (aside from the sheer nostalgia value) is seeing the whys and wherefores of the rule mechanics being described in some detail - which is always helpful when writing one's own rules.

Needless to say you probably have a good idea where this might be going....
Posted by David Crook at 06:27

I think I might stick to my original copy - as £30 is a bit steep. The perils of boutique publishing I suspect.

It is a very good book ... but the price does seem a bit steep, even for a 'classic'.

I think those extra chapters are available online for free (on the Meccano magazine site).

A great book, I have both versions and at least two wargaming chums who got started after borrowing my original copy.

Both my chums are a bit 'crusty' now but then so is my original copy.

The Caliver experience.... on the one hand they have these publications that you really can't do without, and no one else seems to sell, but on the other hand they always seem to be a slightly stupid price... a good buy - but I think I'll stick with my original, un-expanded, copy thanks.... :o)

Had many a happy game with friends using these rules back in the '70's :-O

The price does seem a bit steep, but possibly not if one adjusts for inflation.

Many thanks for your comments with this and I think it is fair to say that whilst the book is a classic the cost is rather too high - especially when you could get a copy of the original for considerably less and the extra articles free online. There is also a wealth of add ons in one of the yahoo groups - old school wargames IIRC - that exapand the basic rules to include light machine guns and with a lot more in the way of gun and vehicle defence values.

Having said all that I am pleased to have the book in my collection but I cant help thinking that perhaps this may have been better value had John Curry tackled it in his History of Wargames project (although it would have been a paperback).

For the record, I have a cunning plan for these rules....

Amazon is your friend (ocassionally)