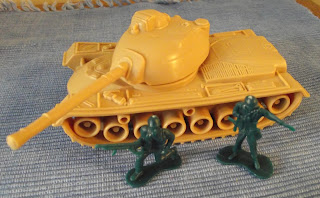 Its a tank, honest - with a couple of figures for comparison.

I had planned to have a game this weekend - honest. Events have conspired against this happening but it has been a pretty good weekend all said and done. Aside from the goodies of yesterday I managed to get to the cinema to catch the film Elysium. It was not bad and had some nice ideas but it felt a little 'light' in terms of the characters for me. Worth seeing if you get the chance though as visually it was very impressive. 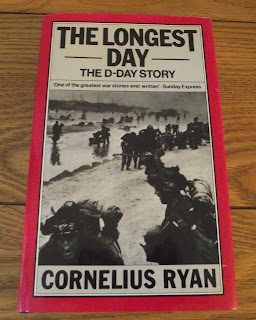 Seen the film, hummed the theme tune - now own the book!

This morning SWMBO and I managed to get to our local (and very small) boot sale - the fruits of which are shown in  the pictures. I am a great fan of Cornelius Ryan and his book on Operation Market Garden - A Bridge Too Far - is one of my favourite books on the campaign. I have not read the Last Battle yet - the fall of Germany) but I do own a paperback copy of The Longest Day - the D Day story. Seeing a hardback edition of this title available for 20p needed no hesitation on my part to fish out the coins and acquire the book in very short order. Following on from Anthony Beevor's title on the same subject you could be easily forgiven for assuming that a Normandy-based idea was in the mix but I can happily refute this! No plans, no time and certainly no inclination for the foreseeable future!

The tank was picked up more by way of an experiment than anything else but I am glad I did. It fits in with the figures I have very nicely indeed (although slightly under scale by comparison) and so the plan is to acquire more of the same and substitute the appropriate paint job where needed for the nationalities in question. The Skirmish show at Sidcup in two weeks can't come soon enough! For the record, the tank was a mere 30p.
Posted by David Crook at 19:17

I have two or three of the very same plastic tank but in dark green, still in my possession and packed carefully away, along with my own green army men from 40 years ago. Neat to see it's still produced.

Nice Find I recentl picked up a hardbook Young bond book at the works for £1 taking it the counter turned out it had been reduced to 50p Bargain!

The Last Battle is I think the best of the three, worth hunting down...

Add some schurzen and you've got yourself a "Panzer" tank.

20p Bargain!
Mine was £3 from a Charity Shop but still worth every penny

I am quite sure that the model of this tank has seen action in various guises on many a tabletop, floor and garden over the years!

It is a great feeling when that happens - especially when you think that the item is cheap enough to begin with!

Lots of possibilities for this methinks.

I am sure that I will come across a copy at some point and for completeness it is one I want to read.

I've got the same edition of The Longest Day as you. It's a great read and I've also been lucky enough to get mine signed by a few Veterans of D-Day so its now a treasured possession.

That tank was one of my favorite toy until the *)s when Gi joe was first introduced as a team.80s retro anyone?

That is a special piece of history to keep.

The God of Boot Sales has been kind to me this year - and I hope he continues to be!

I have seen this model kicking around in lots of places - which means I will not a single one now that I want them!