The University of Kent - Medway Campus 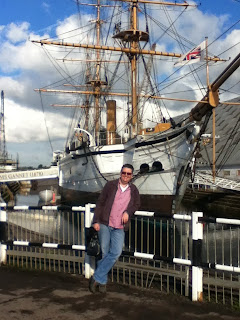 As my daughter is currently at the start of her final year of A levels we have started to look around at Universities for the degree course she wants to undertake. The first of these was visited today and so SWMBO, Holly and I left the house a little after eight o'clock this morning for the short fifty minute drive to Chatham in the Medway towns.

I got the shock of the my life when I discovered that pretty much all of the Campus occupies the buildings that once formed the Royal Naval dockyard at Chatham. In fact, the two studios that Holly would be using (she wants to take a degree in fine art) are based in the buildings overlooking both HMS Cavalier (the WW2 destroyer occupying number two dry dock  in which HMS Victory was built!) and HMS Gannet the Victorian era gunboat! At this point I cursed inwardly as I had not taken a camera with me! Prior to our arrival I should have checked the location but had resigned myself to, at best, seeing the historic naval dockyard from a distance - that is what you get for relying on a map.

Needless to say I was highly delighted by this discovery (Holly had her palm on her forehead and was shaking her head slowly and sighing audibly as her old dad 'took in the view' and immediately pondered how I could organise a game around Victorian gunboats (visions of Bob Cordery's adventures appeared at this point!).

The studios themselves (one of which was the former galvanising shed) are really 'light and airy' and so ideal for budding artists - mainly due to the huge arched windows on all sides.

After the delights of seeing all that assorted naval hardware we continued our tour and saw the small museum of the Kent Police - complete with a 'Tardis' style Police phone box - and an on site brewery so all those student raves should be well catered for....;-) There was also a workshop for artistic model making including a brand new laser cutting machine - and you can be sure my ears pricked up when this was described (visions of poor Holly slaving away cutting out buildings, walls and goodness knows what else until the early hours for her dad!).

The university library is the former drill hall which contains a small cafeteria named after one of the naval ratings killed by a German Gotha bomber raid in 1917. Adorning the walls are a number of photographs from when the Campus was a naval base although sadly I was unable to spend more time looking around. Should Holly secure a place there I will certainly have a very good excuse to look into the buildings and history in a lot more detail.

On a personal note the whole day resonated with much in the way of good feelings. To begin with, HMS Gannet was built in Sheerness dockyard - the town I was born in and grew up in so naturally I felt some kind of 'connection'. Secondly, my grandfather on my father's side (long since dead) who served in the Royal Navy from 1919 to 1945 was actually based at various times in HMS Pembroke - the name given to the shore base of the RN dockyard. I can check the dates for this as I have my grandfather's service papers.

Call it cheesy is you will but I could not help but wonder as we looked around if the ghost of my grandfather was looking down approvingly on his great-granddaughter and his grandson in the same place as he himself had spent many happy years.

So you have discovered the attractions of Chatham. Did you manage to get to Rochester as well so that you could visit the model shop and the biggest second-hand bookshop in England? If not, then I recommend a visit ASAP.

Sadly we did not get to Rochester this time - the tour and lectures took up some six hours - but we will get there at some point. I know Baggins from when I lived in Maidstone so reacquainting myself with it will be a real pleasure - not to mention a model/games shop as well!

HMS Gannet looked superb and I really want to have a good look over her at some point.

Sounds like a good day out all round. Holly got to see one of her Uni choice, you got to poke around and look at old ships. AND you got to embarrass her in public (every dad's goal)!

A good and useful day on a number of fronts.I look forward to seeing where this undoubted inspiration will take you...

Best of all Holly is really taken with the Uni so if she gets in she will have her old dad visiting possibly more than she might like!,

There are many ideas flying around - watch this space for some of them in due course!

When I worked at Lloyd's of London I sometimes had to visit Chatham where Lloyd's Policy Signing Office was. Haven't been there for fifteen years but didn't know about the warships at the historic dockyard. Might need to return!

It is a really inspiring place to go with lots to see and do. I will certainly have a closer inspection in due course - HMS Gannet is very impressive!

Must be a very cultured place then!
Great to see the GANNET is such a fine condition.

Welcome back! HMS Gannet is rather lovely and next time I shall have a good look over her!

David are these chaps of use to you?-
http://armyredwhite.blogspot.co.uk/

Many thanks for thinking of me but the only figures that would useful are the pistol wielding officer types. I will happily take those off you if they are around the 42 to 48 mm height mark. The turrets would be useful as well. My email is roguejedi@btinternet.com

I will measure the figs and be in touch...