There be MORE Pirates!....But from where? 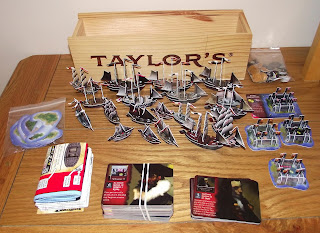 What a treasure trove of goodies - sadly the Port had been consumed....;-)

I arrived home this evening after a long and wearying week to not one but two mysterious parcels. After having reassured SWMBO that I had not been on a buying spree I finally opened the boxes to find the contents you see above. A couple of dozen extra Pirate ships - mostly Spanish and Royal Navy - complete with all the associated cards, tokens and terrain pieces and the added bonus of no less than four forts. There was also a square gridded playing map that I had not seen before with rules to use the models on a square grid. I will get this laminated for protection purposes but the idea of using a square grid is not a new one as a certain number of SEEMS will attest to. I still have the scars to prove it - literally....;-) 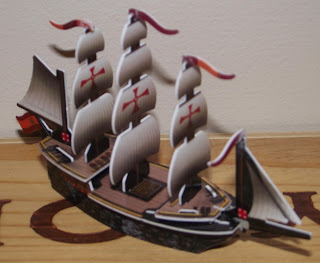 I have no clue as to the identity of this mysterious benefactor although my suspicions are directed to the north and with the initials of a well known Tennessee beverage in mind this should serve to illuminate the matter. I will however, extend my most sincere and grateful thanks to this doyen of gaming and of such a generous spirit - it is very much appreciated and will most certainly be put to good use!

(Please drop me a line as well - you know who you are!)

No need for secrecy DC, I am that man and I am sure you knew it all along.

I should have included a little note but did not.

My gift to you has added another increment to the reduction of the 'lead' pile although not of 'lead' themselves.

I have used all of these options so far in the last year or so. I may take a few more years yet to exhaust all of them.

I am sure that you will more of the 'gift' than I have so far. You are welcome!

Give you joy of your good fortune David!

Many, many thanks for this donation to the plastic pile - it has given me much food for thought - and I am sure that I will be making much use of the same in due course.

If there is anything that you are on the lookout for let me know and I will see what I can do.

I am a very lucky chap - especially as I will not need to paint anything!