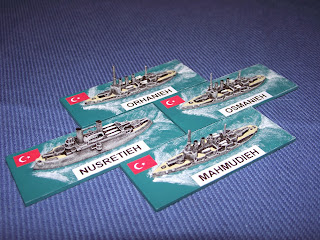 Fezian battleships circa 1905. Nusretieh served as the fleet flagship during the pre-dreadnought era.

The man cave is in dire need of a tidy up or, to be more specific, a reorganisation. It is not that it is a mess as such - more like I have another idea to make it more space efficient. All will be revealed in due course but the upshot of my 'moving-things-around-to-see-where-they might-best-fit-allowing-for-the-temporary-placement-of-the-Christmas-decorations-boxes-by-my-gaming-table' is that have made the acquaintance once again with the pre-dreadnought fleets of both Fezia and Rusland aka inspired by Turkey and Russia. Though I say so myself I was rather pleased with the way these turned out - so much so that I have revisited the partially painted battle cruisers for both the British and German fleets for WW1. 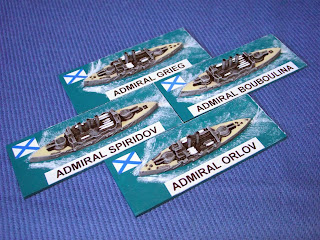 The models that I have currently awaiting the brush are not going to be completed as they were intended i.e. for the Royal Navy and the High Seas fleet. I have opted instead to go completely imagi-naval and complete the fleets of both Fezia and Rusland. Furthermore, I do not intend adding anything further to either fleet so they can make do with the models I have available. I have abandoned my plans to incorporate any Panzerschiffe models although I may possibly add a couple of C in C 1/2400th models in due course - just to add a little variety. I have a number of ideas around the composition of the fleets that have been described previously so I won't repeat them here but suffice it to say one side will be primarily British ships and the other will be German. Or possibly a mix of the two.

I have not played a naval game of any sort for some time and seeing numerous blog posts on the subject has got me hankering for the tang of salt in the air; the icy dagger-like sting of the spray at 30 knots and the boom of rolling salvoes of heavy ordnance with the acrid smell of cordite....

Well, in the mind's eye anyway!

I always find naval games to be a worthwhile diversion - a soothing balm to an overheated imagination - whilst I am beavering away on other projects - the only problem is that they then tend to take over what I was originally working on....Hmmm.

One significant detail that you might not have thought of but which could seriously impact your table top gaming is whether or not your navies will have wireless.

1905 is about that time that it was beginning to appear in some navies . . . will yours have it or not?

It might not seem like much, but it does very much affect sub-commands. Will they be operating on original instructions once the smoke of battle obscures visual communication OR will they instantly get changes of orders from the flag via wireless?

Personally I'd go with no wireless yet because I think it is more fun . . . but this is your naval war and not mine, so the choice is yours.

I do encourage you to consider the issue, sir.

The whole orders thing - whether wireless or other means - is something that I have tended to ignore/fudge over the years but you are absolutely right that is should be considered in some fashion.

So I will do just that!

Thanks for the comments re the ships - I enjoyed producing these and am looking forward to adding the larger models in due course.