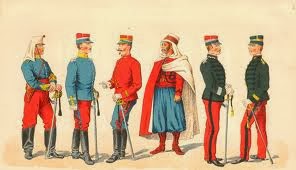 Some rather dashing Gallic colonial types (depicted for reasons soon to be revealed....) 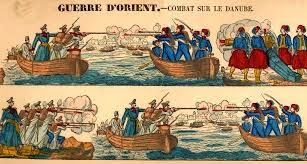 I found this under the Crimean War images on Google but I reckon it is from the Russo-Turkish War - any thoughts would be appreciated!

Sometimes you just have to take things on the chin and accept the inevitable. That is what I have decided to do for the time being as my attempt to formulate a set of Grand Tactical rules for the 19th century is causing me a certain amount of pain! I am just not able to make anything stick in respect of the ideas I have - it is as though they are there but for some reason I cannot translate them into a meaningful set of rules. I suppose you could almost call the wargamers equivalent of writer's block....;-)

I need to be a little more disciplined in how I tackle this idea and so further research is needed  - which is a rather cheeky way of saying that I need to read some more sets of rules for inspiration!

I shall step back from this for a while and do something completely different. Whenever I have experienced a wargames land battle overload my thoughts inevitably turn to the sea and so, in order to cleanse my palate so to speak, that is where my next efforts will be directed.

Mention of matters naval related of course raises the looming spectre of painting as I have rather a lot of 1/2400th scale WW1 ships to finish off for Fezia and Rusland so I am hoping that a quick game will serve to reignite the enthusiasm.

I'd leave it be for a little bit old chap.

Mull over it and come back to it when you are ready.

I managed to get myself in a proper lather over the combat hierarchy idea so figured that discretion was the better part of valour in this case!

Naval it is then!

It does appear to be Russians vs Turks but the uniforms do look more Crimean era than later RussoTurkish to me. So guven the Danube reference presumably early in the Crimean War, before the Crimean came into it.

The answer to the wargame block will probably come to you while doing some thing else, usually something like driving or showering and unable to make notes.

Having had a closer look I suspect you are correct about the uniforms although the Crimea is not a war I know much about. I hope to rectify this though!

I have usually found that when I have some paper to hand the ideas never seem to flow but as you rightly point out, when I don't....;-)

This is a very sensible course of action to take ... and may well lead to a solution faster than you expect.

I've found that painting 1/2400 ships to be a very quick and satisfying experience.

They don't take long to do and with the completion of each ship you have a new gaming piece . . . so I think that painting them would be a good thing for you to do right now.

I certainly hope so - and a change is as good as a rest in these cases!

To be honest some painting is long overdue so it will be fun to get back into it - even if it is only shades of grey!

These are 'Crimean' War David. There was a little known start to the war on the Danube, sometime called, 'The Varna Interlude'. Trevor Royle's book has a good chapter on it.

Many thanks for clearing that up for me!