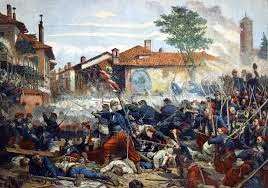 The Battle of Solferino - not one I am very well acquainted with but I certainly hope to rectify this in time!

OK then, so here is how it goes. In various posts over recent months I have been droning on about tweaking this set of rules or that; I have experimented with several and have probably drafted many more besides. Initially I wanted to work on a smoothbore version of Bob Cordery's MOB or Itchy and Scratchy rules but then a couple of things came to light that have thrown the proverbial cat among the pigeons.

The first thing to derail my well-intentioned thought process was of course, Neil Thomas and his excellent book on 19th Century wargames from 1815 to 1880. I have raved about this book and every time I have opened it have been inspired in one way or another. I had planned (and indeed have done so) to devise a hex based variant and fully intended to test them this weekend BUT have come up with a rather better notion. The second thing (actually second and third if I am completely honest) was a couple of blog posts I happen to read. The first, from the good Kaptain Kobold, has already been mentioned in my most recent battle report but the second caught me completely by surprise and had me kicking myself for not thinking of something similar myself.

MS Foy over at Prometheus in Aspic posted a blog entry way back in December 2011 (the 15th to be exact) in which he discussed some ideas for a grand tactical version of Command and Colours Napoleonics. The intention was to fight large scale battles with reference to actual orders of battle. Essentially, a block represents a battalion of infantry, a regiment of cavalry or a battery of 6 to 8 guns. Furthermore, a hex could contain mixed formations e.g. 3 blocks of light infantry, a rifle blocks and perhaps a battery of artillery. the only restriction was that only infantry supported by artillery or cavalry supported by artillery could operate in a single hex.

This got me thinking and what really got my creative juices flowing was using this approach in conjunction with some of the ideas that Neil Thomas has in his book and then bolting the results on to Bob Cordery's MOB rules - derived as they are from Command and Colours but without the cards.

The Neil Thomas set has some great ideas for formations which would work well with the blocks and would add some rather nice tactical considerations. For example, columns move but lines do not. Also, units pivoting expend movement and fire at reduced effect. There are also rules for skirmishers.

Taking all this into consideration means that her is the potential for a rather neat set of rules that could easily cover the late Napoleonic Wars and with some period specific tweaks just about everything up to around 1880. The ability to be able to map units from historical orders of battle to blocks is a real bonus for me and I intend working on this over the next couple of weeks whilst I am away.
Posted by David Crook at 21:03

Sounds interesting. I hope you will share your hybrid rules when they are completed.

Many thanks Chris. I have started work on a draft of the rules and hope to complete this whilst I am away.

Have no fears on that score - once they have been drafted and I have run a test or two I will happily post the results and share the output!

It's always interesting to read of your thoughts and experiments on rules etc. I must go back and read the post you referred to on the 'Aspic' blog too, I don't recall reading that one.

Hi David - I shall follow this with great interest - I was never completely happy with my grand tactical compromise version of C&C (as you may know!), but I think this is a useful and potential valuable area of study. I haven't read Mr Thomas' book - i think maybe i should...

Most interesting. I am just in the process of sticking all the little labels on a massive mountain of C&C Naps blocks prior to inaugurating my set. After the basic game, I still have Austrian and Russian blocks to do, but I am forging on because a) I think this will be a good way to learn the basic battles prior to trying them with miniatures and b) once I learn C&C I can play it better via Apple Face Time with Kinch.
I am most interested in your ideas as to amending C&C (yours and Foy's both) and look forward to what you may have to tell us here.
Cheers,
MP

Labelling C and C blocks is rather relaxing in 'non-thinking' sort of a way and there are many gamers that have bought the game purely for the rules and use figures instead. The blocks look really good but are a little lost when used on a 4" Hexon tile which is why I prefer to use my own as they are larger.

My ideas are really just making use of assorted good bits, sticking them together and seeing what comes out the other side!

Rest assured the progress (or lack thereof) will be duly reported on the blog.

Many thanks kind sir! I found MS Foy's post quite by accident as it predated me 'following' his blog - but I am very glad I did so!

Your post just seemed to resonate off the page and certainly got me in a lather! Neil Thomas's book is excellent and I would recommend it unreservedly - You can pick copies up for £12 or so in hardback and it is worth every penny.

I have a number of ideas around what you had suggested and hope to turn these into something workable over the next week or so whilst I am away.

All the best and many thanks for the inspiration!