By the time the Rusland commander realised what had happened the battered columns of green-coated infantry were back behind their starting positions and with the light fading were in no position to attack again. An attack against prepared positions at night was not something he relished and so he resolved to settle the issue once and for all the next day. Whilst many of his troops were able to enjoy a brief respite much of the infantry spent a tiring and irritating night moving, under cover of darkness, to their new positions prior to the new day.

The plan was simple, brutally so. The bulk of the remaining infantry would rush the left flank Fezian position whilst the artillery would silence their artillery. A small force would anchor the Rusland left flank, keeping the opposing Fezians under observation and, crucially, away from the main attack. the Rusland commander was confident that his men, despite the punishing losses of the previous day, would prevail.

For the Fezian commander the new day would come far too quickly. Despite the inexplicable retirement of the Rusland infantry at what would have the moment of success he was well aware that the next day would be a different story entirely. The infantry was woefully insufficient to hold the area required and the losses in artillery were particularly serious. The right hand artillery redoubt was abandoned and occupied instead by infantry - which in turn would have been invaluable if deployed on the left. 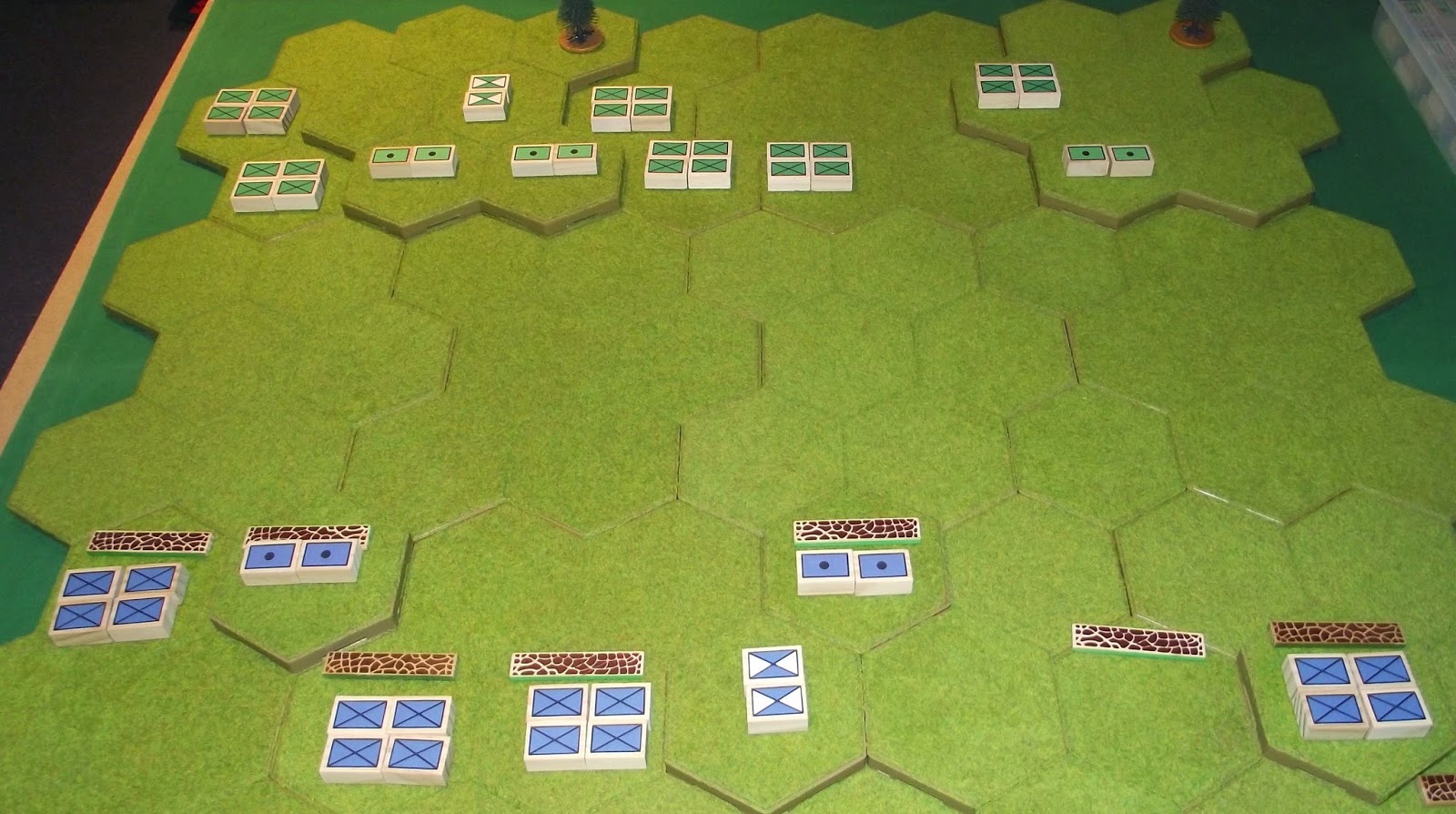 The initial dispositions. Both sides have prepared as best they can and have, with one accord, identified the area where the main attack will fall. 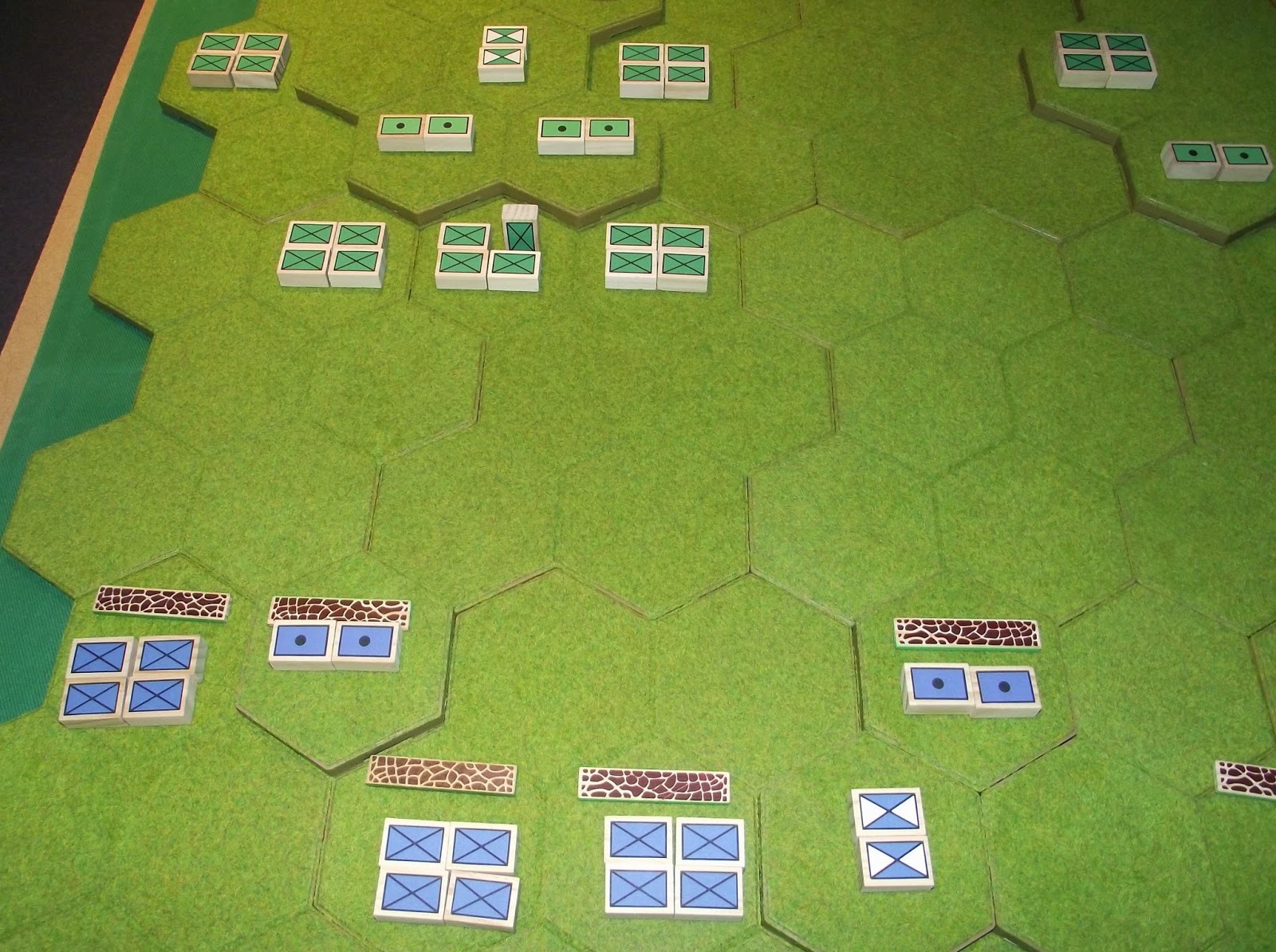 Turn 1. The Rusland infantry advance and immediately attract the attention of the Fezian gunners. 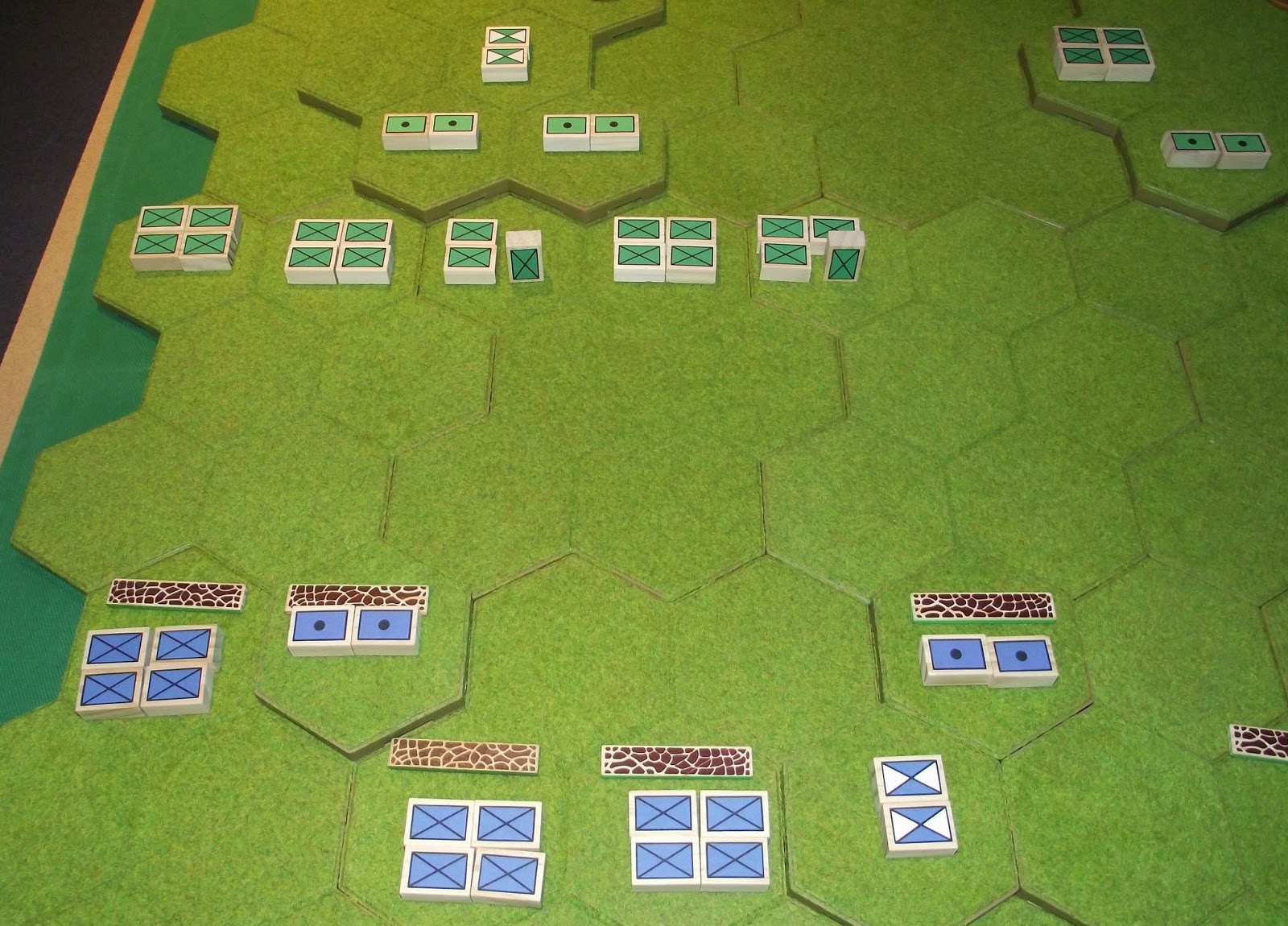 Turn 2. The Rusland infantry shake themselves out into attack formation whilst the Fezian gunners continue to batter their ranks. 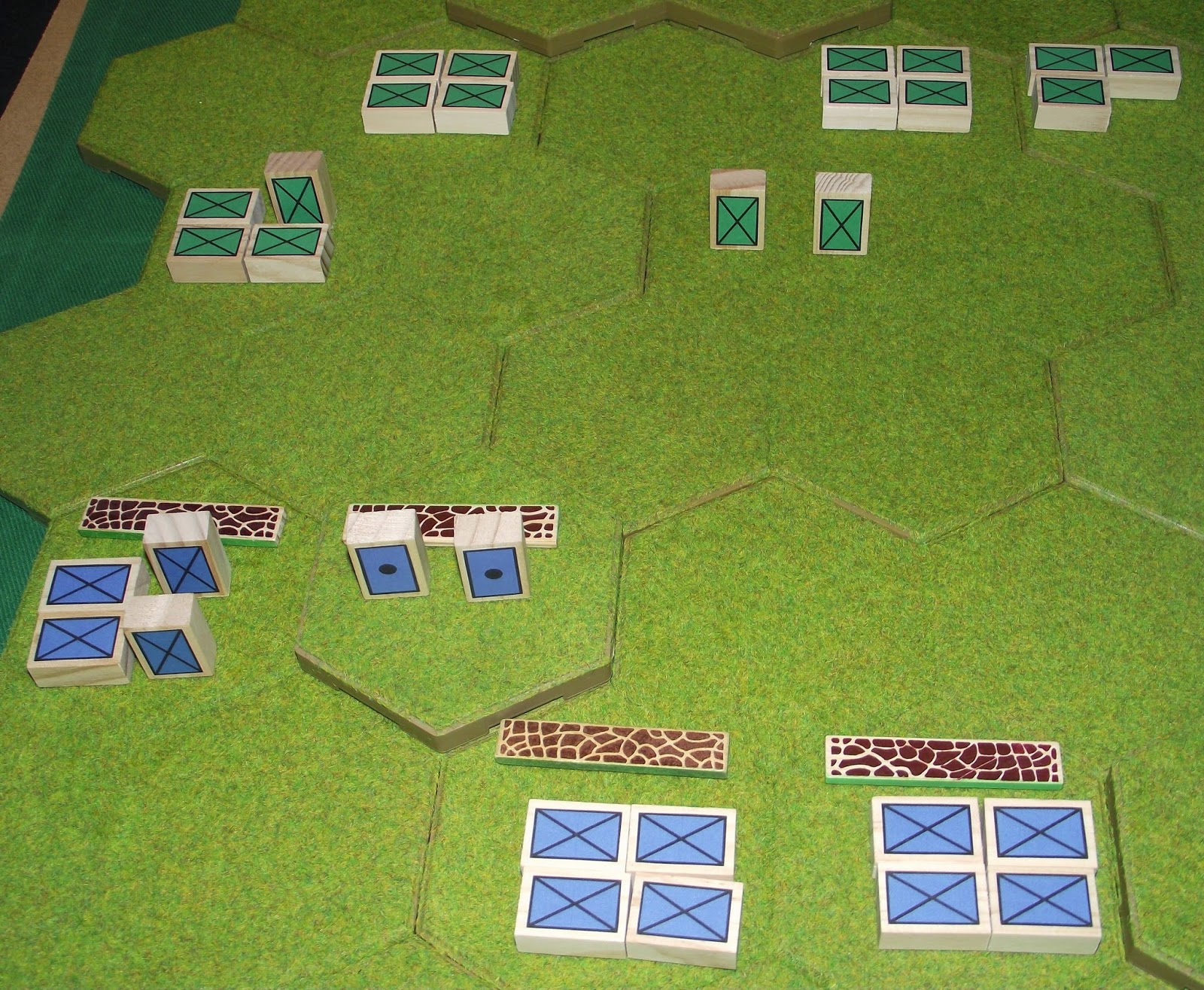 Turn 3. As the Rusland infantry advance at last their artillery succeeds in destroying the Fezian guns. Their infantry though, continue to suffer. 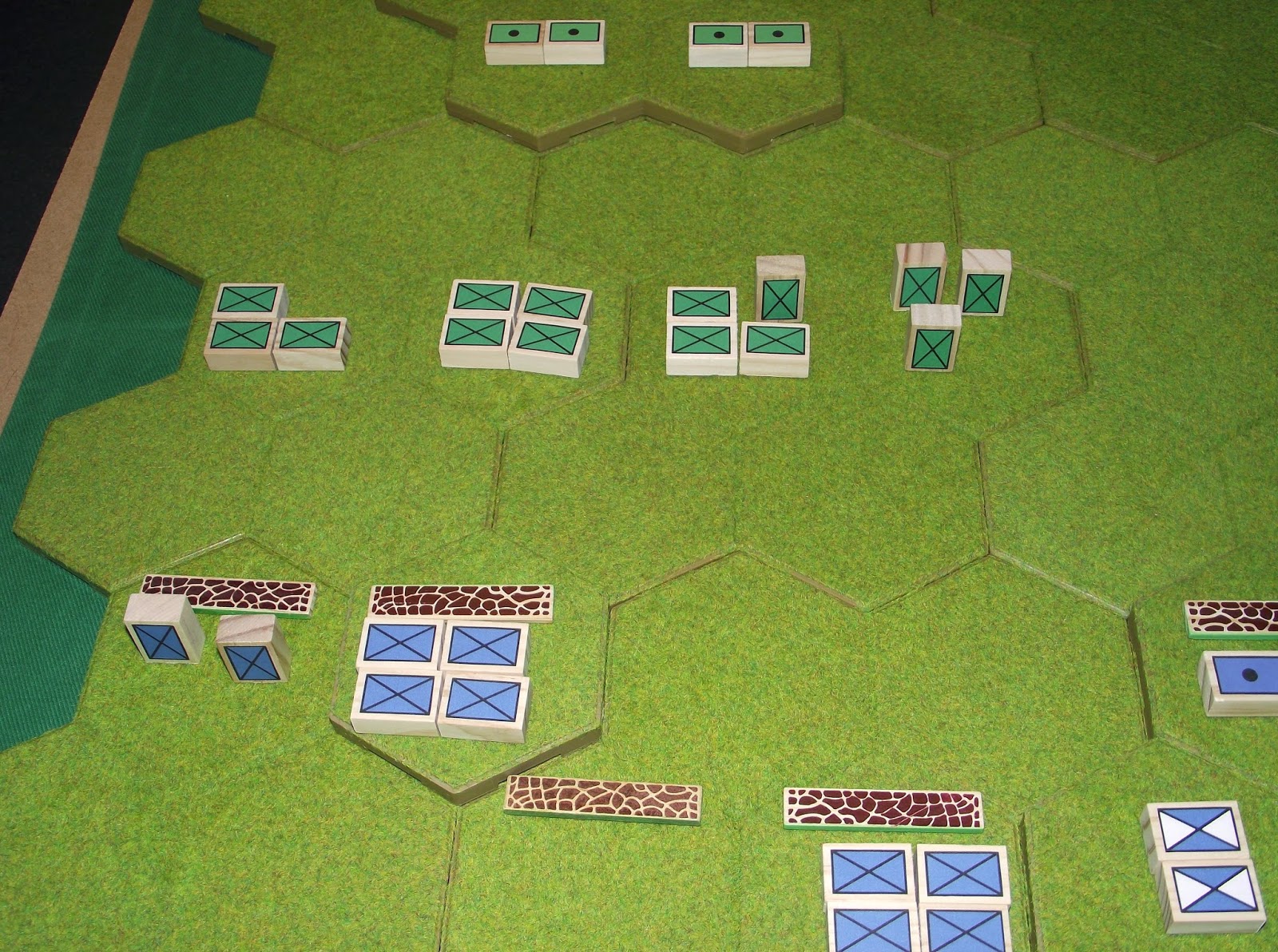 Turn 4. The Rusland infantry, wary of the Fezian position, seem to be content trading long range rifle fire - for which their superior numbers are used to telling effect. 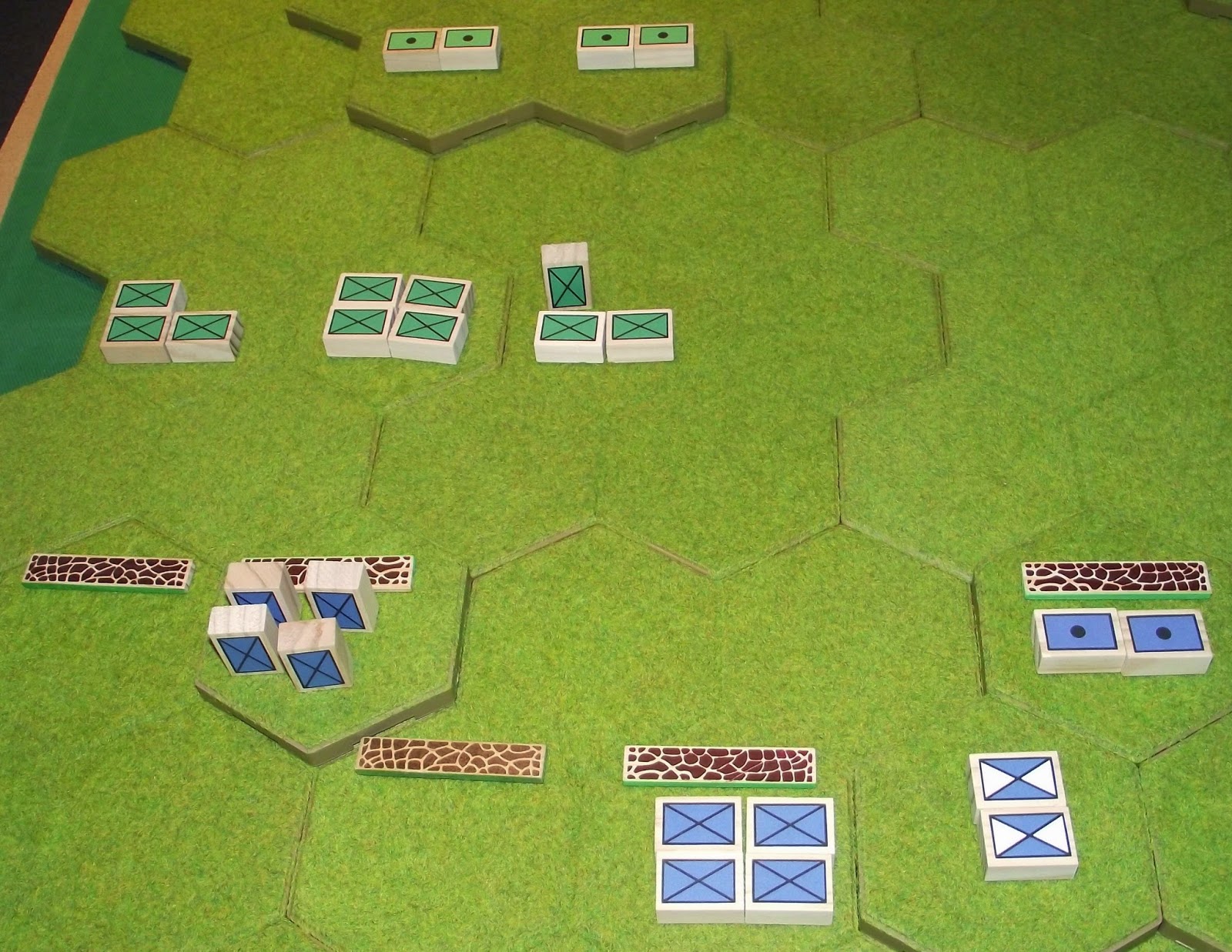 Turn 5. Endgame. The last of the Fezian infantry is defeated and the way is now open for the Rusland columns. Despite their heavy casualties the Rusland assault has prevailed and the remaining Fezian troops, in order to avoid unnecessary bloodshed, lay down their arms. The road to the Fezian capital is open and her fate has been sealed.