The Planeka Pass. Note the Fezian fortifications on the right - the artist has wrongly depicted the artillery redoubt as being on the floor of the valley.

Following the declaration of war against Fezia the Rusland army launched an invasion on Fezian held Remania. The topography of the northern provinces of the country was less than ideal for an invading army unless a measure of strategic surprise could be gained. The terrain on the border was very mountainous with three main passes leading to the rolling countryside beyond and the capital of the region, the city of Karelevna. The Fezians were well aware of the threat the border passes posed to the city and had for centuries maintained a border defence force. Each of the passes had a system of artillery redoubts backed by infantry occupied field fortifications. When fully manned these were formidable defences. The Fezian policy on the frontier was to substitute manpower for firepower and defences and so these were routinely relatively lightly held due to the strength of the position. In the event of an invasion reinforcements could be readily be sent to the front from Karelevna so the frontier forces were initially designed to check any invasion and then to overwhelm it.

Rusland were able to achieve a degree of strategic surprise - rather surprisingly as the prospect of war and been a major topic of conversation on the international stage for some months - and so two army groups had been able to burst through the border defences and had invested Karelevna on both the west and the southern approaches. Rusland only needed to break through the remaining pass - at Planeka, in the north - to be able to fully invest the Fezian regional capital. Although it was not realised at the time the Rusland invasion had already compromised the Fezian border defence plan as the troops ordinarily earmarked for the Planeka Pass were now having to shore up the defences  of Karelevna. The Fezian force in the pass would have to fight with what it had.

The following action was fought using same variant of Memoir of Battle by Bob Cordery as I used for my last game. As there was no cavalry present I allowed the Cavalry dice icon to be used as an infantry activation. I abandoned the use of the doubles exchange (see the last battle for details) and both sides were able to roll 6 activation dice to determine how many units they could activate per turn. 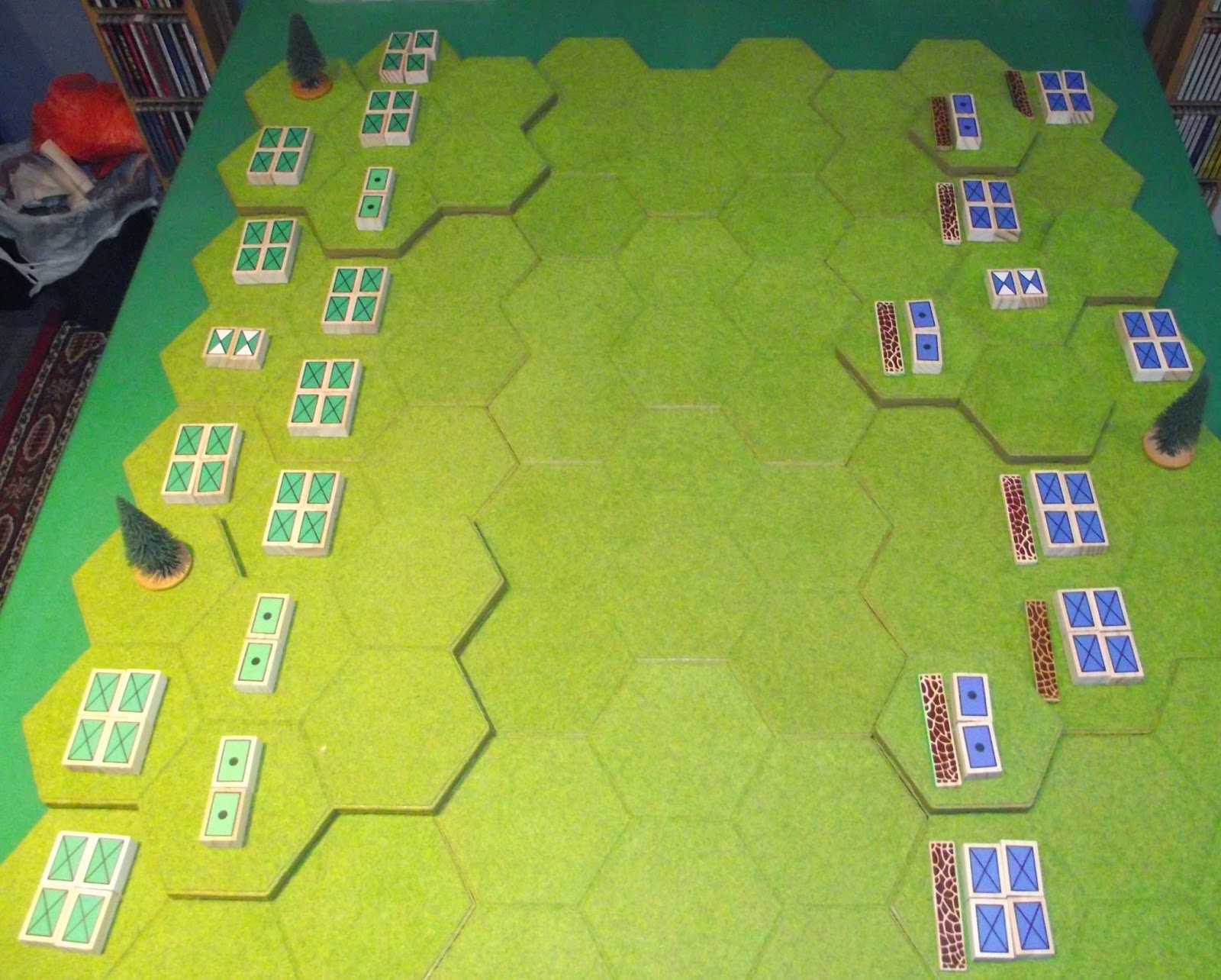 The initial dispositions. The Fezians are deployed with their artillery in hilltop redoubts whilst the infantry are in field fortifications. Although undermanned compared to the invading Ruslanders they are able to make a bold front. 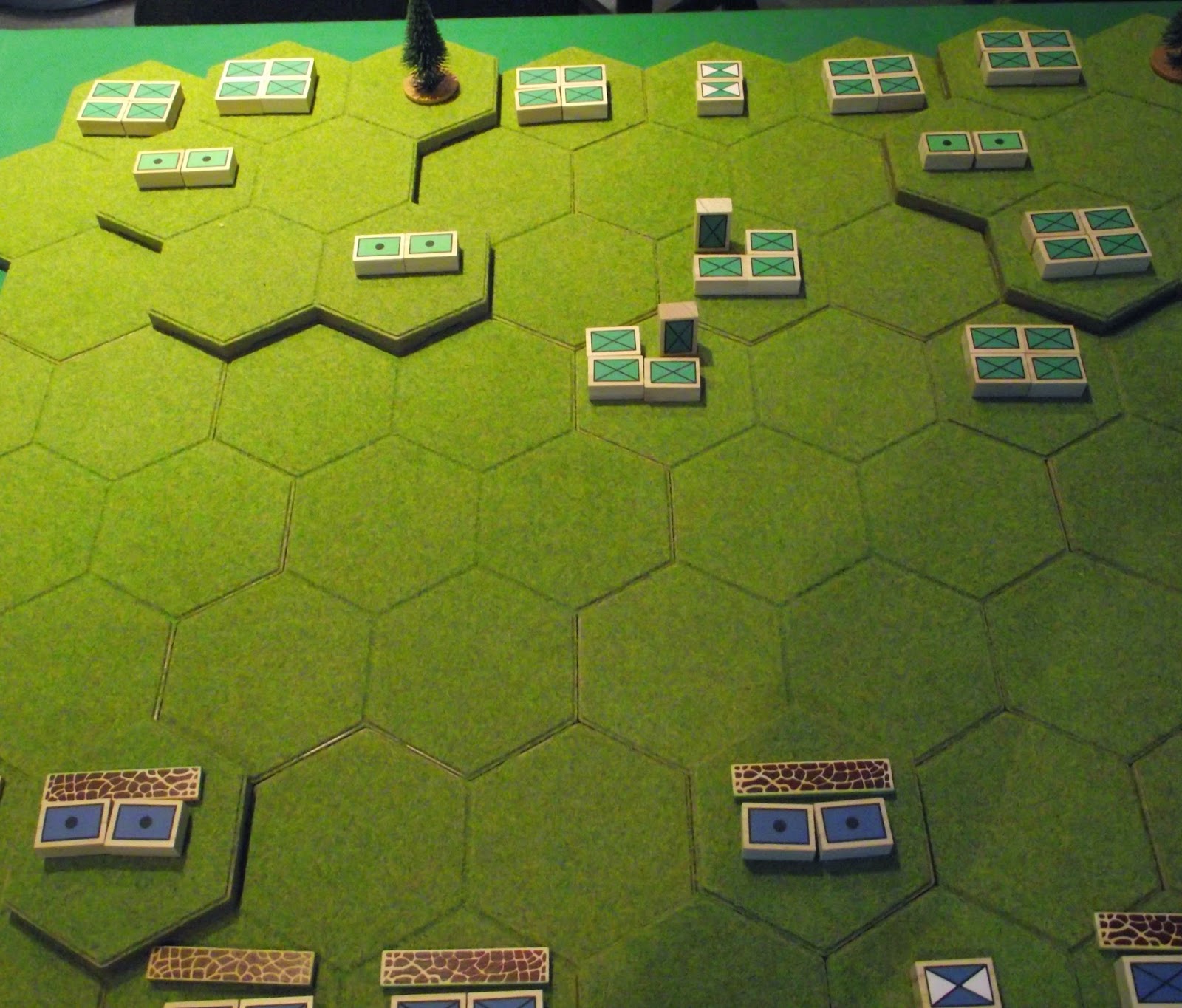 Turn 1. The Ruslanders commence their attack on their left but with their artillery still moving up into position. Meanwhile the Fezian artillery has no such difficulties and opens fire with effect almost instantly as shell after shell rakes the approaching green coated columns. 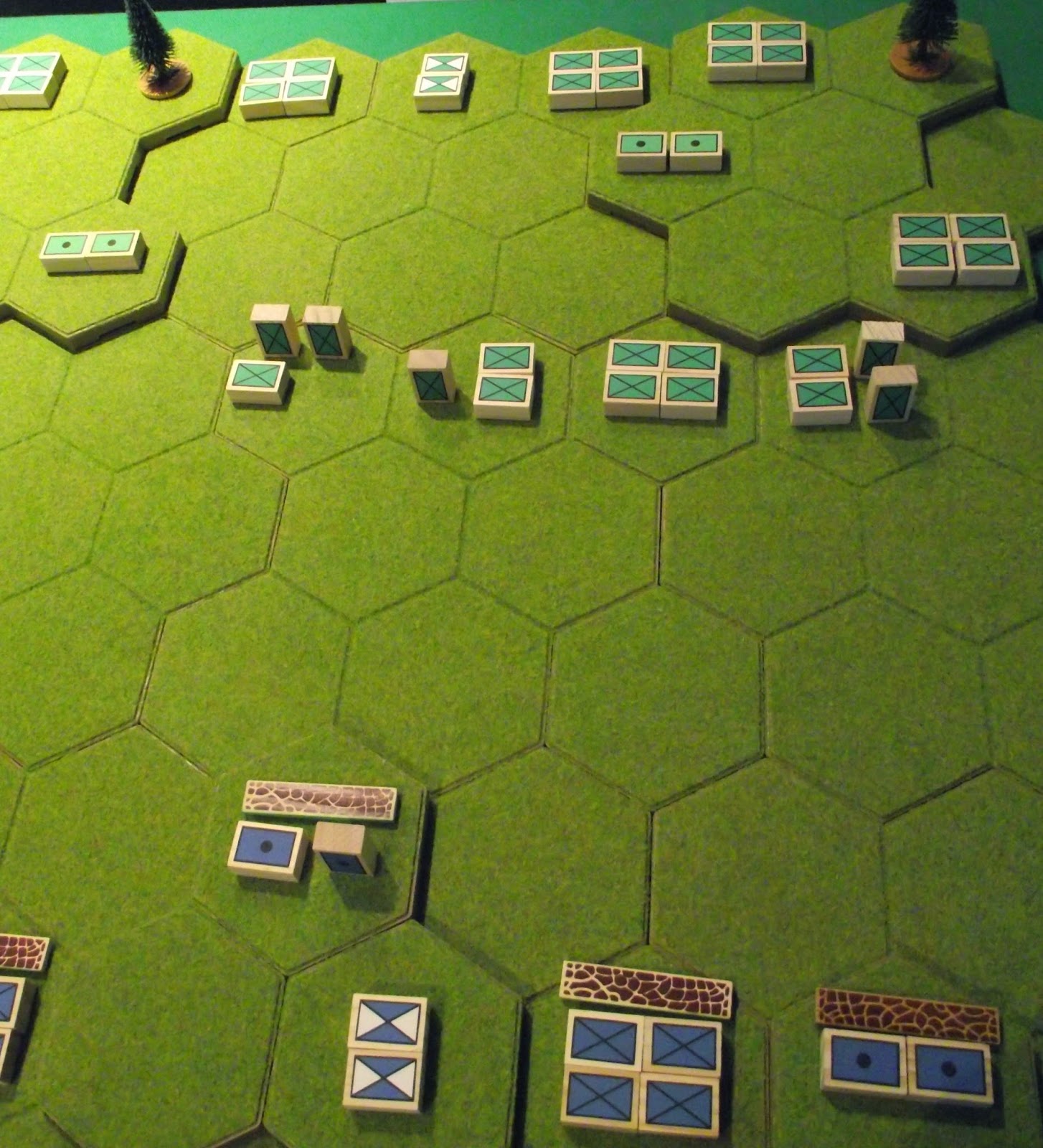 Turn 2. At last the leading Rusland artillery battery comes into action and sores a direct hit on their Fezian opposite number! the respite is brief though as the Fezians continue to bombard the Rusland infantry. 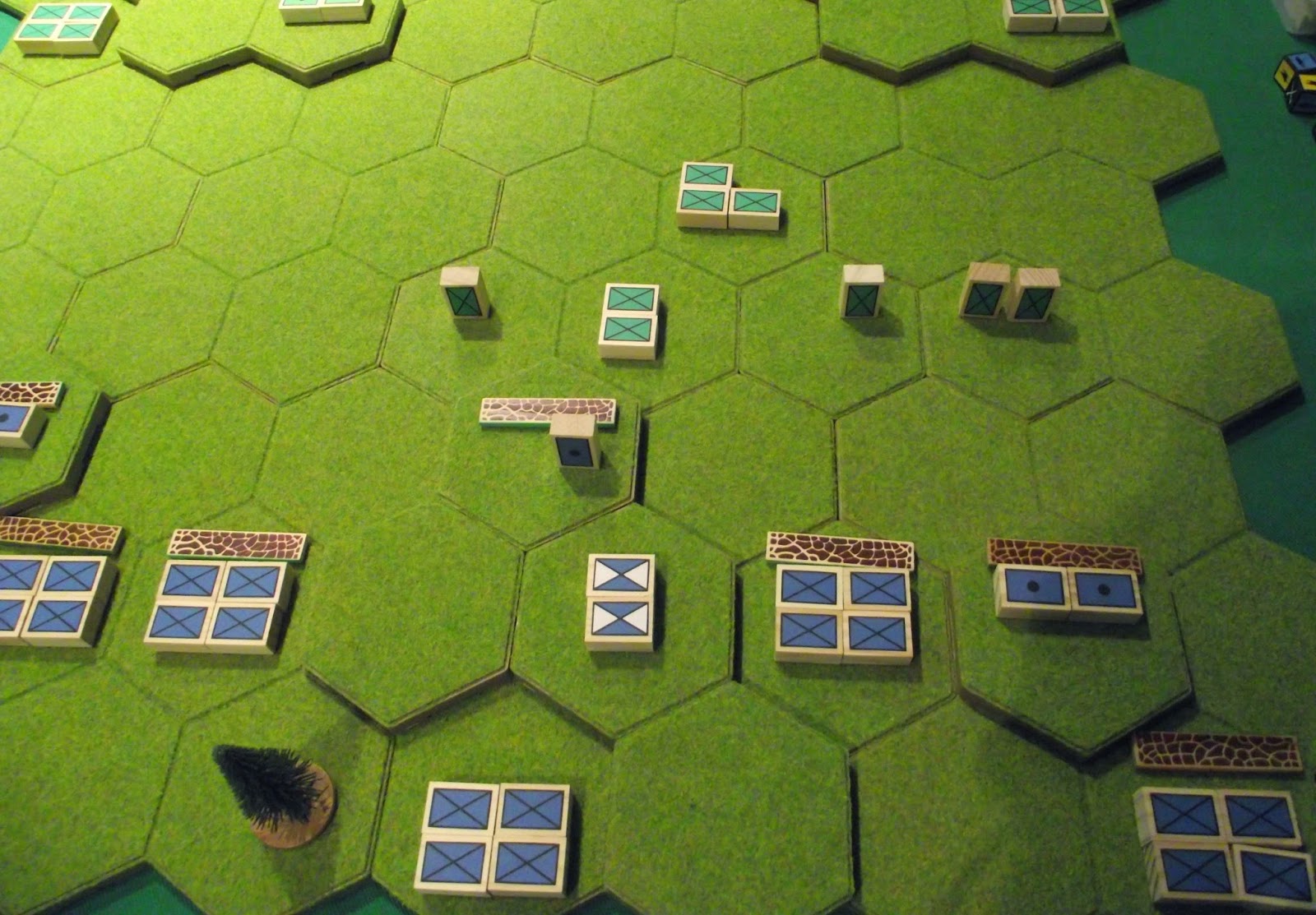 Turn 3. As a furious long range firefight develops the Rusland infantry succeed in destroying the remaining Fezian gun in the central redoubt. Taking advantage of this gap in  the Fezian defences the green coated infantry surge forward to the edge of the redoubt. Meanwhile the other Fezian artillery continues to batter the advancing columns. 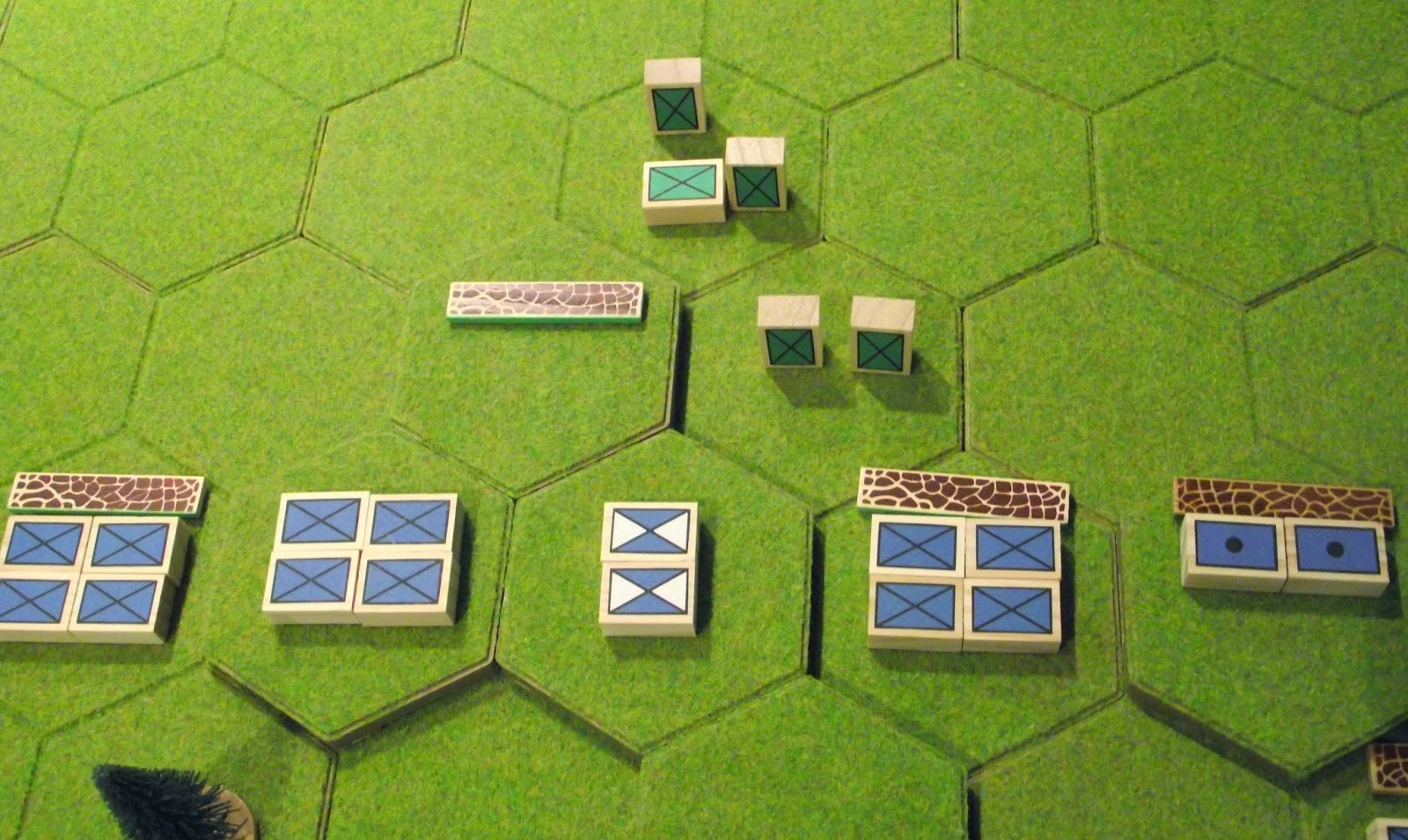 Turn 4. The crisis in the centre is averted as the Fezian commander swiftly moves to reinforce the central redoubt as the advancing Ruslanders are caught in a murderous crossfire from rifles and artillery. The attack wavers and then grinds to a halt. 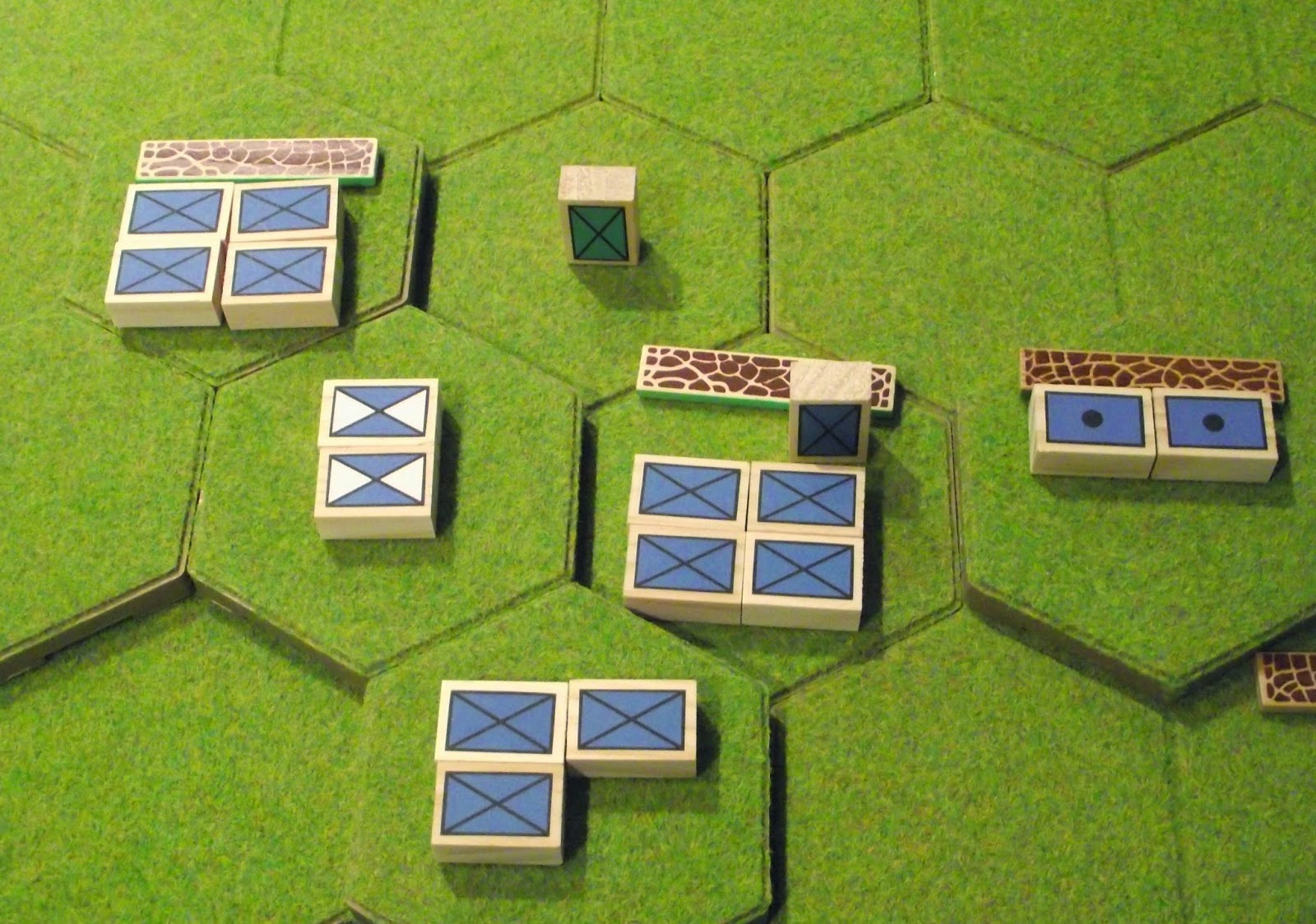 Turn 5. Despite a Fezian infantry unit being temporarily driven back at bayonet point the attackers are now too few in number to have an impact and the remainder is swiftly dealt with. The centre is stabilised although the loss of the central Fezian artillery unit is major blow. 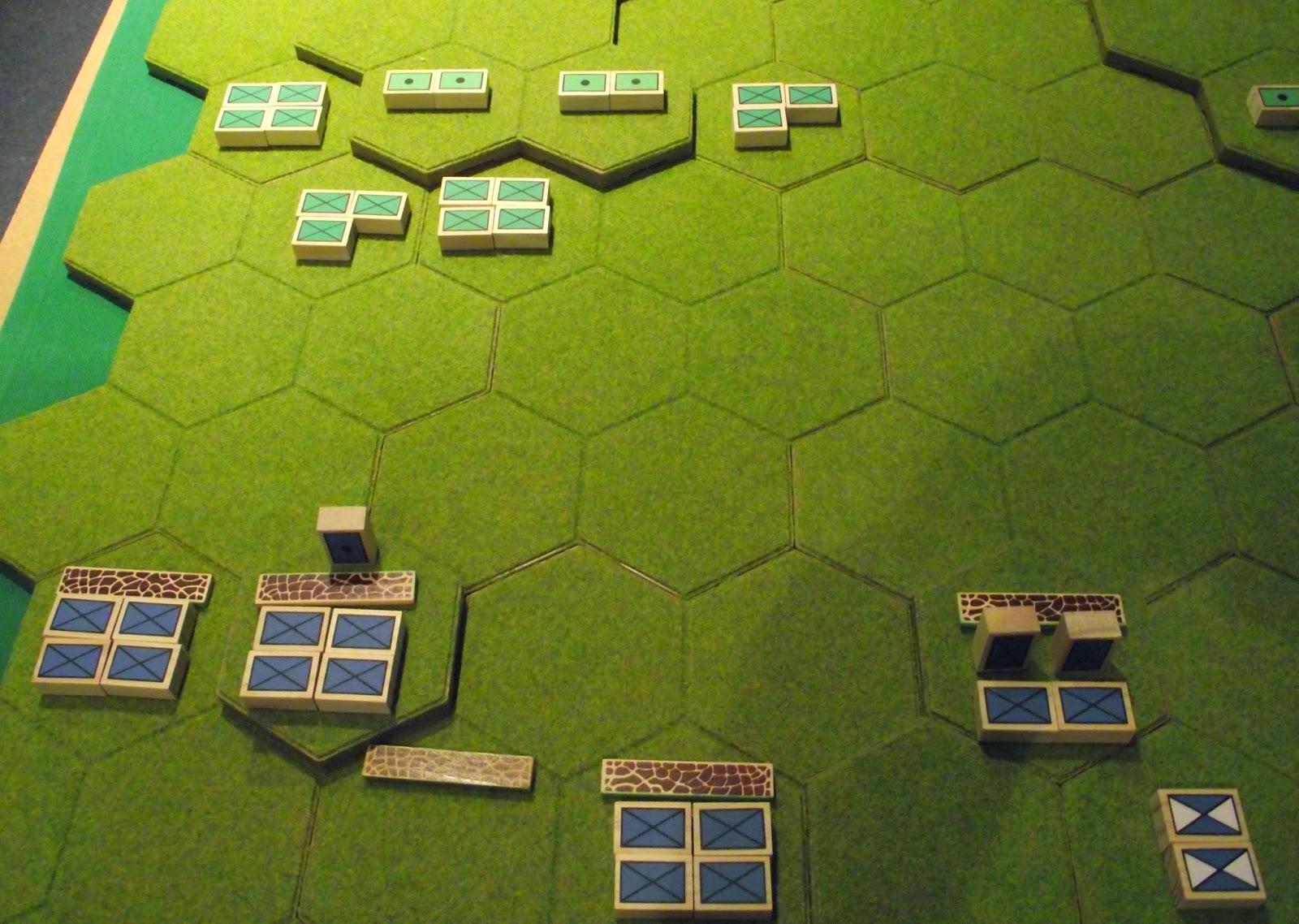 Turn 6. Whilst the Rusland attack on their left had been repulsed with losses on the right events were taking a very different turn. The combined weight of Rusland artillery (the two batteries on the hill) had succeeded in silencing the facing Fezian artillery and so their infantry were able to form up to launch their assault relatively undisturbed. The Fezian infantry was outnumbered and was now being raked with Rusland artillery fire. 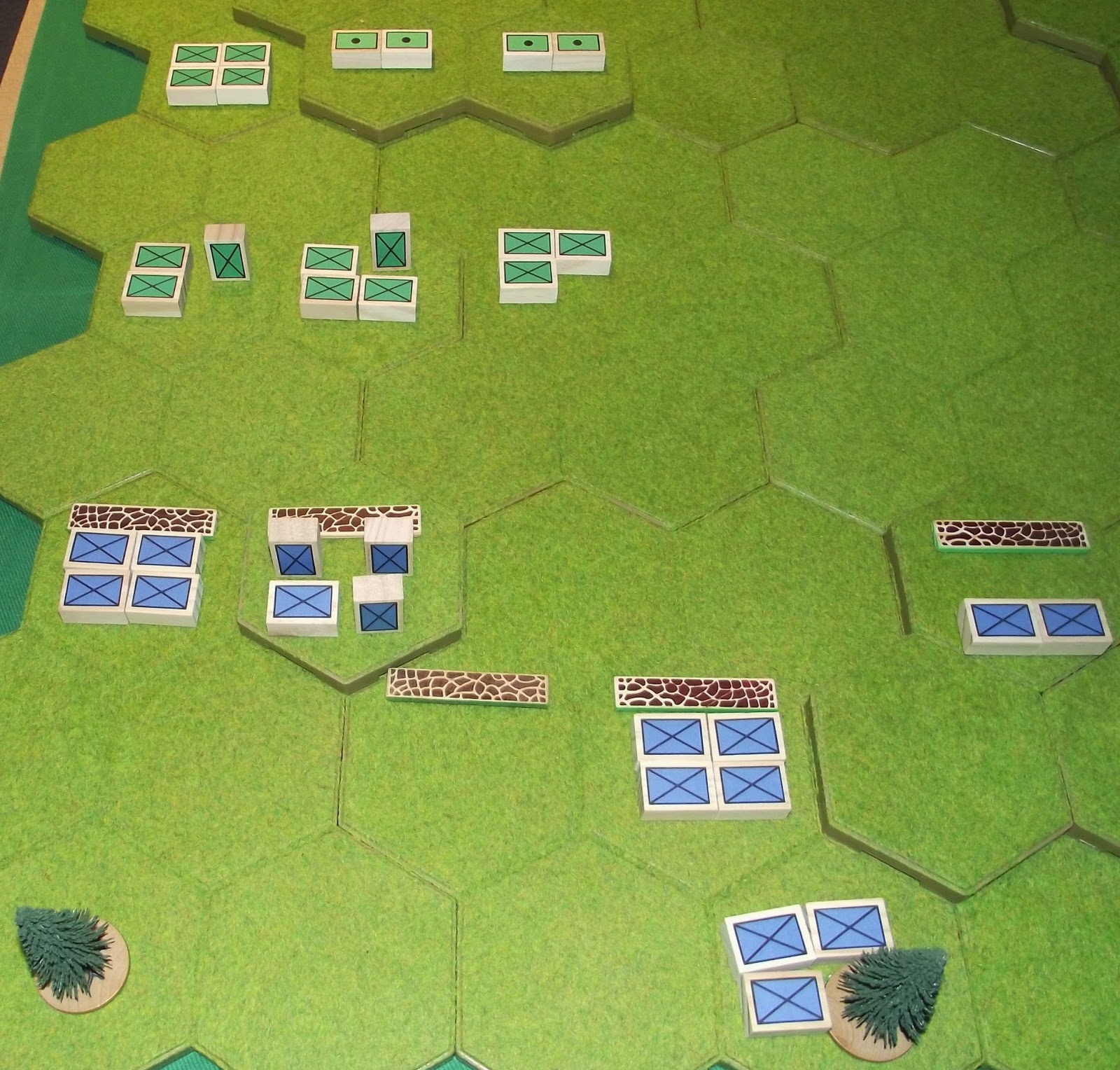 Turn 7. The Rusland columns press their assault and the numbers begin to have a telling effect. Meanwhile their artillery fire blazes overhead, smothering the Fezian defences with shot and shell. 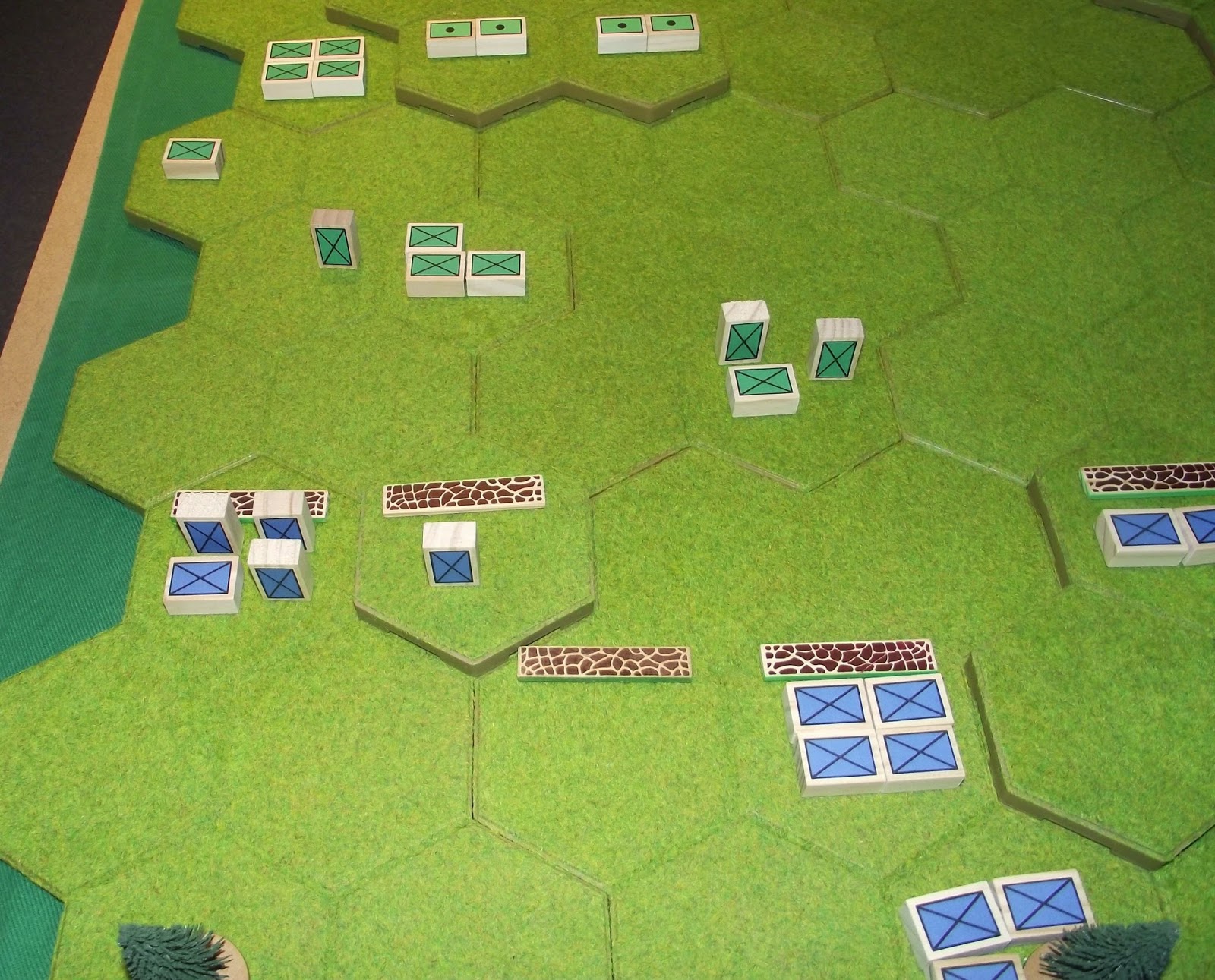 Turn 8. At last the breakthrough is in sight as the last of the Fezians defenders succumb to the weight of the Rusland assault. The Fezian reinforcements are now too far away to prevent the Rusland advance from taking the forward positions and so a foot is being readied to boot open the door. 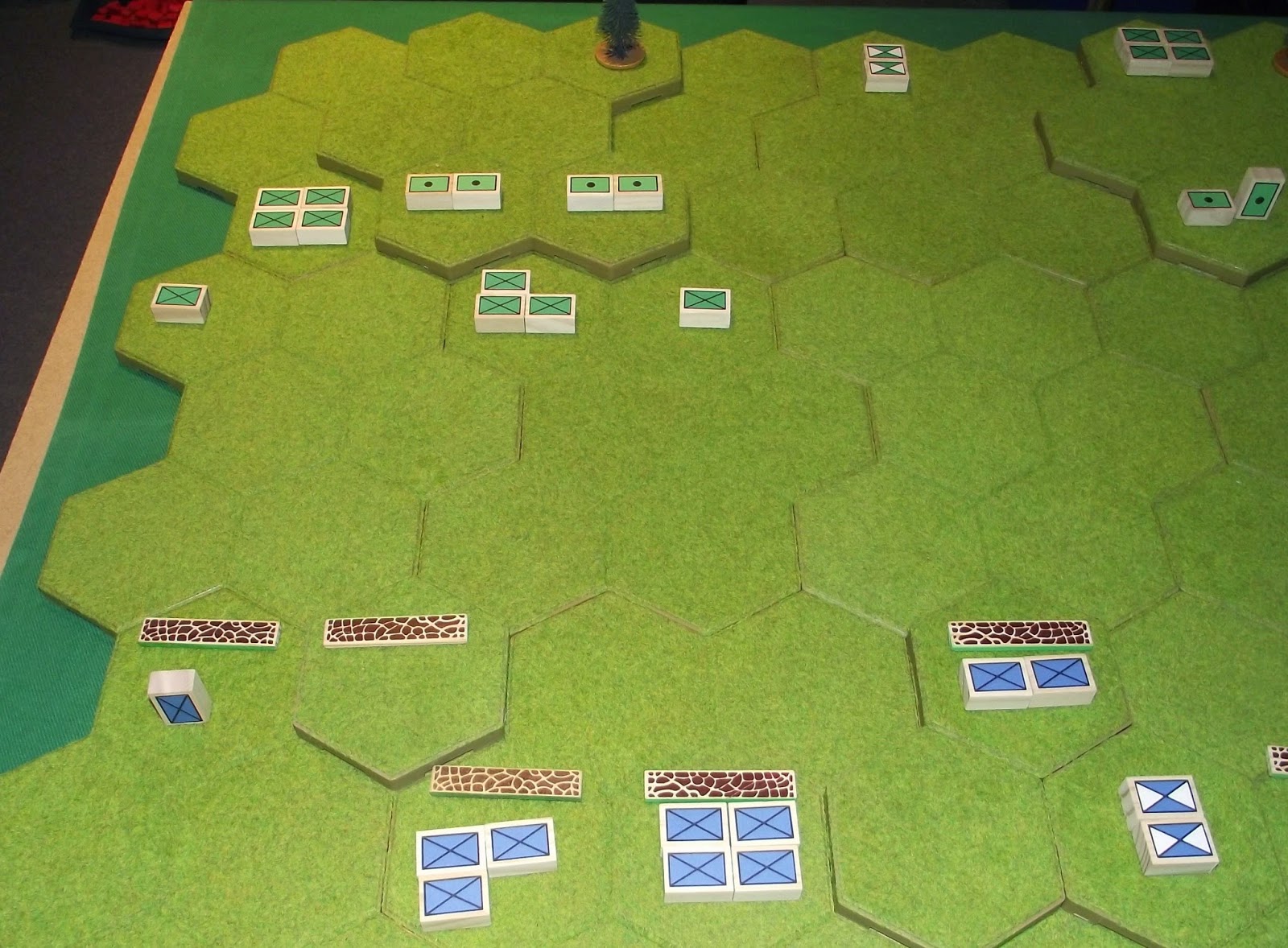 Turn 9. Disaster! As the last Fezian defender is overwhelmed by fire and with their reserves struggling to get into position, the only remaining obstacle impeding the Rusland infantry has been removed. However, due to a command mix up, the green coated columns inexplicably break off the attack and fall back towards their starting positions - presumably to reorganise prior to the assault on the Fezian position being launched. As the Rusland troops fell back so the Fezian infantry, somewhat incredulously, breathed a collective sigh of relief and blazed away at the departing enemy. The Rusland assault, poised on the verge of victory, had been called off!

Oh dear, oh dear, oh dear! The faux pas on the final turn was entirely my own fault - I had miscounted the number of strength points the Fezians had lost and so pulled the Ruslanders back so they could avoid any further casualties. This failed as the Fezian infantry scored a single hit at long range which took the Ruslanders to their exhaustion level of 24. The Fezians were on 15 out of 16!

The rules worked out really well and the final mistake was the only blot on the landscape - however, not to be put off by my own shortcomings I have resolved to to rectify this unsatisfactory outcome in the only way I can think of - the old wargaming standby of "Night has fallen...."

In many respects that was as realistic an outcome of battle as any I have heard on the war games table! There have been a number of instances in which a battle has been lost when one last effort might have tipped the scales. The Battle of Shiloh 1862 (first day) might be cited as an example.

Initially I was annoyed with myself BUT then decided to use the situation to my advantage....and the sequel will follow in due course!

I will take a look at Shiloh - my knowledge of the ACW can best be described as being like the curate's egg - good in parts!