I Have Been To....Skirmish, Sidcup in Kent 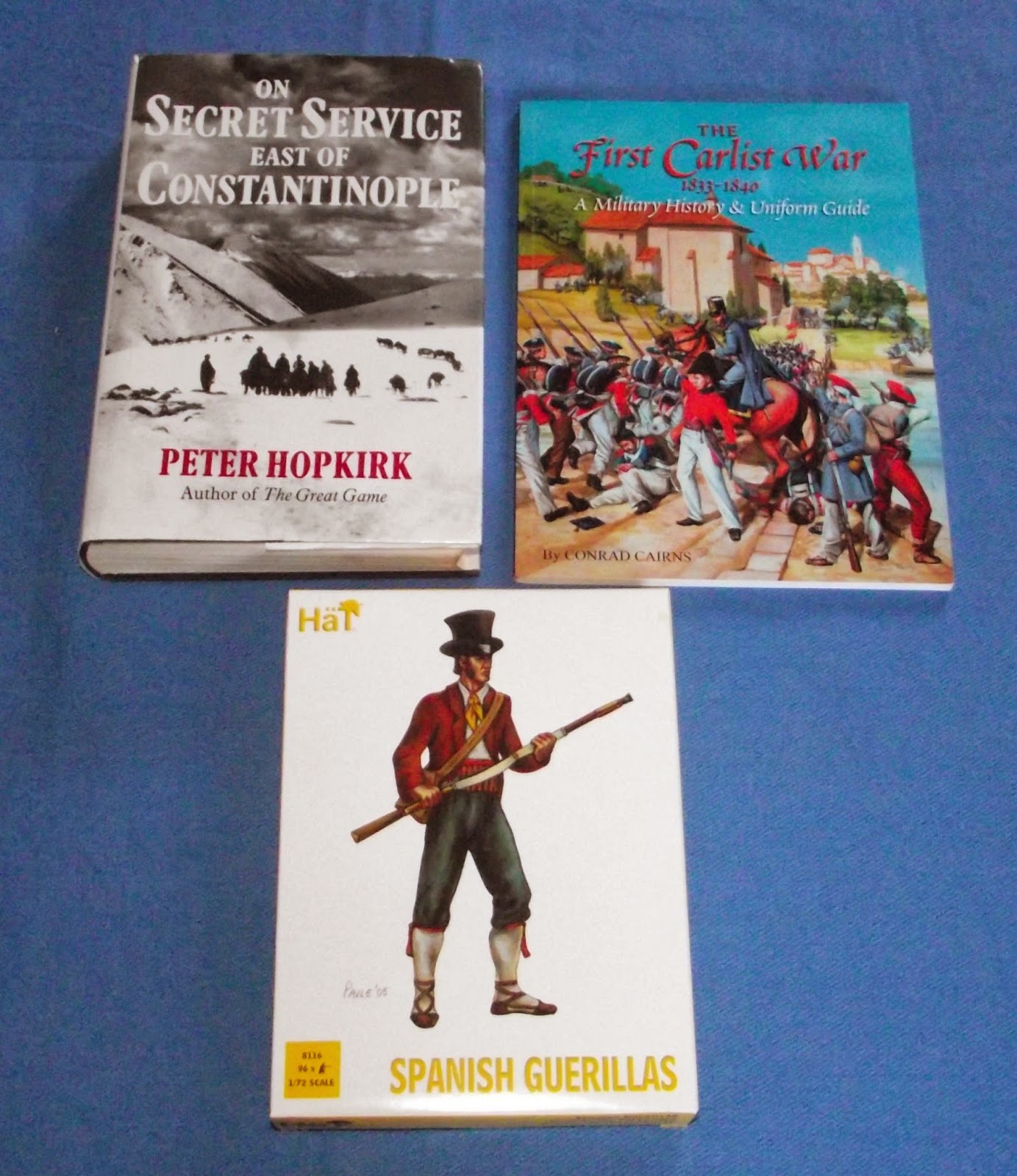 A modest haul courtesy of the bring and buy for the Peter Hopkirk title, Dave Lanchester Military Books for the Carlist volume and the Spanish Guerillas from Andy's Models

On a bright and sunny Sunday morning I hopped in the car and made my way to the Skirmish Plastic Soldier fair at Sidcup in Kent. I like this show as it is quite small, easy to get to and gives me a chance to get out for a couple of hours. I had an ulterior motive in that I had some matters to attend to following my recent decision around trimming the collection - business was duly dealt with first of all - which took all of fifteen minutes to tackle so leaving me plenty of time to rummage and chat.

I met up with Big Lee and Postie of the Rejects fame and we discussed matters many and varied  - especially the accuracy of wargames mortars. Wargamers tend to like going over tabletop happenings and the conversation was both amusing and stimulating in equal measure.

I was very restrained as far as spending was concerned - the two books above have been on my 'to get' list for some time - and the only indulgence was the box of 96 Spanish Napoleonic Guerillas. I have a number of ideas for these figures and so it will probably not surprise you when I mention that the Peninsula war does not feature as one of them! As an aside, they are lovely figures and I shall look forward to slapping some paint on them in due course - especially once the ideas I am currently playing with come to fruition.

The Hopkirk title covers the clandestine attempts by the Germans to initiate a Jihad across the Muslim world against the British. Lots of ideas in this and visions of German supported Afghans taking on the British and Indian troops in the Khyber Pass has a certain whimsical charm.

As for the Carlist war well, what can I say? The book is really good and chock full of wargaming 'stuff' - uniforms, maps, orders of battle and much more besides. It is not a speculative purchase - far from it - as I have a few ideas for the period kicking around and have wanted to get a copy for ages.

There was some interesting games on display but sadly I did not take my camera. Clint was there with his Arab Revolt game which looked really good with some very impressive camelry - and it will be even better when the palm trees arrive! There was also the First Battle of Lissa for naval enthusiasts and even a Battle of Britain variant of Memoir 44 using Tumbling Dice 1/600th scale aircraft (not that is something to ponder!).

All in all it was great way to spend a Sunday morning - and just so as I don't forget, a very special hello to those very nice people at Pilum Painting!
Posted by David Crook at 18:41

I am very envious as I spent most of my day completing the clearing of the conservatory ... with an electric screwdriver whose battery went flat in the middle of dismantling the last of the fitted units.

A very controlled haul! I was knee deep in kitchen draws while you was all chatting about mortars!!!

I did wonder if you would be knee deep in the conservatory in preparation for Monday. I hope all is back on track now though!

It was a good day out for sure - and a welcome diversion from all the work related dramas of recent weeks.

Postie mentioned something about you were decorating - you can't beat some 1:1 scale modelling!

Nice haul get some bedtime reading.

Very restrained on the wallet bashing. Enjoy the reading

Two for the commute methinks rather than bedtime - I am usually two tired to read during the week!

I was good and am actually looking forward to painting some figures - which is something of a miracle for me!

Good to see you again. Sorry we didn't get to chat but I was being entertained by Postie himself :0) Next time we must have a proper chat as I'm dying to know how the toy soldier project is progressing. Andy&Lorraine at pilum painting.

The toy soldier project is underway although in a slightly different form than originally intended - it is also under wraps for the moment so I can't go into details!

We can have a proper catch up at Broadside if you are going as I will not be Salute.

Yeah we will be at Broadside. Stuart liked the Turks so much he bought them!!
Andy&Lorraine

Hi Dave nice to bump into you again. I have done a quick battle report on my blog. Looking forward to you joining in at Broadside.

It is by no means a massive show but is inspirational all the same. It was nice to get out for some wargames 'stuff'.

I reckon Stuart has a cunning plan or two up his sleeve! I will see you at Broadside and promise to have a chat when I do!

I really liked those camels....

Looking forward to Broadside for sure but be warned - the Lawrence quotes will be coming thick and fast!

It was good to see you Sunday, been a while. And the less said about those mortars the better!