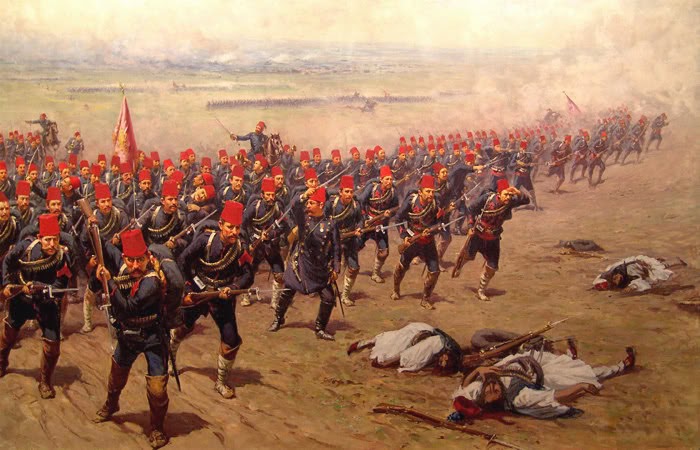 Turks in action against the Greeks.

After a couple of weeks of, for me, careful deliberation and experimentation (including painting up some samples) I have finally settled of the scale I intend to use for my armies. In making this decision I have considered a number of factors but it is safe to say that he key one was the relative ease with which the chosen figures can be painted - especially important considering the painting technique I intend employing.

The scale I am opting to use (and the first small order will be on its way to Pendraken very shortly) is 10mm/N Gauge/1:150th. Aside from the painting aspect I considered the following:


I intend using an 'old toy soldier' style of paint job - probably with gloss varnish - which the majority of figures in this scale lend themselves to rather nicely. I have seen some very detailed painted examples of models in this scale but that is not a path I intend to follow - it would defeat the object for me because if I wanted to paint detailed models (actually painting models in detail is more accurate) I would use a larger scale and indeed, I shall do just that for any skirmish type games.

I have ideas for a number of projects using this scale but first under consideration will be the Russo Turkish War or Fezia and Rusland by another name.

I shall still use other scales for various things - I have in mind some larger scale skirmish games and even some very small models for another idea I am messing around with but the main bulk will be 10mm figures based on 40mm frontages - ideal for using with Hexon tiles.

I've used 10mm in the past. When I painted them I primed them in black paint, then dry-brushed on the color paint. Quick and gives instant shadowing. Of course those were Old Glory figures, which comes with infantry 5 to a stand.

Sounds like a well thought out project !- Pendraken do very nice figures .

OOOh shiney! Its not 6mil but its a step in the right direction ;0)

Looking forward to seeing more on this. What period have you chosen?

I have often thought 10mm would be good for skirmish games...you would only need a 2' table and 6mil terrain would work and ......oh god you've got me at it now!

I have seen the Old Glory types and for massed rank type armies using the technique you describe would be ideal. I am going to stick with single figures though.

For the record I would use Peter Laings if they were available!

I was rather more thoughtful about this than usual before making the decision and, for me, it ticks all the boxes.

The figures are big enough to see and paint and small enough that even I can manage it....;-) Funnily enough I had not thought of skirmish level games in this scale.

To kick off the Russo Turkish War will feature.

First on the tray will be some Russians and Turks - and I am looking forward to the painting!

I really thought about this quite carefully and also tried a few samples that I had kicking around - and I was really impressed with the overall look.

Plenty to look forward to once the first batch of figures arrive.

I am a 10mm convert. The scale has all the advantages of 6mm and 15mm combined. Currently I have 2 Samurai 10mm armies, 2 Spanish Civil War armies (Nationalist and Republican) and am working on 10mm British Colonial period. Everything Paints very nicely and is a joy to complete.

You are certainly right about the advantages of the scale - and I ope to crack on as soon as possible with the Russians and Turks!