Shades of Those Magnificent Men.... 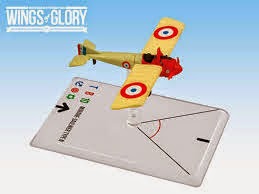 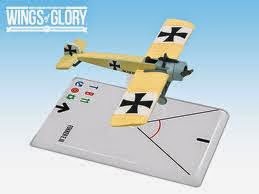 This is very a much a WW1 related post staring with a very pleasant afternoon spent at the home of Mr. Fox. After a Richard Holmes style lunch (you would have to read his excellent Riding the Retreat to know what I am going about!) we set to with a game of Wings of Glory - the 1/144th scale WW1 aerial combat game. Mr fox has a huge collection of the models for this - including such wonders as Gotha bombers and more fighters than you can shake several sticks at. Many of his models have been custom painted and, like everything he turns his hand to, are absolutely magnificent.

The game pitted a pair of Fokkers against a pair of Moranes and the 'Fokker Scourge' was uch in evidence as both Moranes were downed. I was very pleased with the result - especially as one of the Fokkers was in Turkish livery - although one of my aircraft did its best to take itself out by ramming one of the Moranes and catching fire in the process....;-)

The game was played on a couple of Mr Fox's newly acquired scenic mats designed to go with the game - very nice but not cheap. 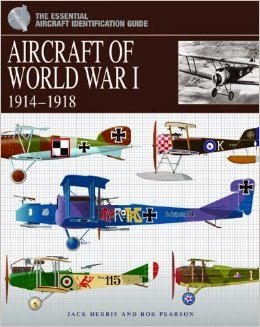 I also took delivery from Mr Fox of a very nice book indeed - the one pictured above in fact - and it is really good. I mean it is REALLY good! Published by Amber this came from the Works for the princely sum of £4.99 and it covers virtually every aspect of the Great War in the air and with theatre specific coverage - including Turkish Albatross fighters....It is very colourful with lots of technical details and as good a selection of side views as you could wish for. It has got me even more inspired following on from Kaptain Kobold's 1/600th aerial adventures using his home grown Spandau and  Lewis rules. All I need is a Tumbling Dice catalogue and a cunning plan or two.

Finally, I managed to watch the last of 37 days - the BBC dramatisation leading up the outbreak of WW1. I enjoyed this - if enjoyed was the right word - and it has given me much food for thought about the war in general. Finally (yes I know I have said it already!) I also managed to make a start on the eight dreadnoughts for the High Seas fleet.

All in all it has been a pretty good Saturday and I would like to extend my thanks to Mr Fox for a quite superb afternoon - the Green King IPA went down like nectar!
Posted by David Crook at 21:01

Thanks for the heads-up. Last time I saw that book for sale it cost a bomb! I'll have to see if they have it in the Bristol branch!

You may be able to order one from the Works online. In the meantime though I will keep an eye open this end for another copy - there is a branch in Basildon that may prove to be useful.