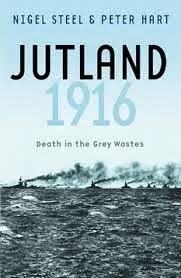 I have just finished reading the above title by Nigel Steel and Peter Hart - and what an absorbing and thoughtful read it is!

I have read a number of accounts of the battle of Jutland over the years, most of which are concerned more with analyzing the battle rather than telling the story with the participants in mind. Messrs. Steel and Hart manage to do just that and the result is a refreshing overview of what it actually felt like to be under fire in a warship during the Great War. It is a cliche to say 'all human life is here' but the pages seem to run the full gamut of emotions from hope, fear, expectation, melancholy and anger at the futility of it all. It is a sobering read in places and supported by a good narrative of the progress of the battle makes for an excellent account of the action. The authors have made much use of the Imperial War Museum archives and the eye witness accounts are utterly absorbing and thought provoking.

I picked my copy up at a boot sale some time ago in paperback for some 50p but have decided to pursue a hardback version for the collection - simply because it is such a good read.

In the meantime though, work progresses on the German dreadnoughts and I hope to have these ready at some point over the weekend. A small order is in with Stonewall for a couple of other bits and pieces so the overall project (which when complete will comprise around a hundred ships in total) is progressing nicely. I am hoping to have the entire collection completed by the end of June.

More to follow in due course.
Posted by David Crook at 06:16

A fascinating climax to a highly complex set of circumstances. I did a Command study of Admiral Jellicoe a few years back and found it quite engaging, especially when my good friend did Admiral Beatty at the same time - some lively chats indeed!

I recall your Jellicoe study - and a fine piece of work it was!

I missed out the word under - which has been duly rectified!