The German Dreadnoughts of World War 1

It has been a busy weekend for various reasons but I have managed to complete the eight German dreadnoughts for 1/2400th scale WW1 collection. I followed the suggestion of Paul Hague in his book Sea Battles in Miniature and have represented classes on the basis of one actual model per two ships. Odd numbers above multiples of two are discarded and single ship types are represented by a single models. The models are 1/2400th scale Stonewall Miniatures and paint up quite nicely - I have said previously that they look like 1/3000th models on steroids or, crucially, are of a similar basic level of detailing to the models produced by Panzerschiffe in the US of A.

The first class of German dreadnoughts - there were four built with the others being the Rheinland and the Nassau. They were armed with 11" main guns - 12 in all with 8 on a broadside.

S.M.S. Helgoland - note the main turrets having the same layout as the previous Westfalens. The Helgolands and the Westfalens formed the 1st Battle Squadron

The Kaiser class consisted of five ships with the others being the Kaiserin, the Prinz Regent Luitpold and the Konig Albert. The Friedrich der Grosse was the fleet flagship until the S.M.S. Baden came into service.

The Konig class - configured similarly to the contemporary British 13.5" classes but with 'Q' turret on a higher deck. These were very good ships and were both very tough and quite handy, touching 24 knots on occasion. the remaining two ships were the Grosser Kurfurst and the Kronprinz Wilhelm.

Very tough, fast but with a main battery of a lesser calibre compared to the Royal Navy.

The first dreadnoughts the Germans completed were the Westfalen class, followed by the Helgolands, the Kaisers and then the Konigs. I am in two minds about the Bayerns but in any event do not have any in the collection as yet.

The models were painted using my trusty 'black undercoat and dry brush with some detail blocked in' which works rather nicely and has the added advantage of being pretty fast as well.

Mention of the Panzerschiffe models was intentional as I have decided that I shall use them for my gap filling as the C in C and GHQ ranges are too rich for my blood and also too detailed when set alongside the Stonewall types. I am getting an order together for these and the first of which will tackle the thorny problem around the early battle cruisers as currently there aren't any!

Aside from the models above I have also relabeled some of the Fezian and Rusland light cruisers into their correct nationalities. This now gives the RN eight and the High Seas Fleet six. I may add some others in due course as the Germans are rather limited for choice and I rather fancy the idea of commerce raiding in the early period of the war.

I will be making use of Panzerschiffe for this element of the collection - simply because they make a fairly good range with a standard of detail that is ideal for my needs.

Next on the tray are the Royal Navy dreadnoughts. Again, these will be in pairs although the Queen Elizabeth and the R classes may get 3 models a piece - although if I do that then strictly speaking I should add a further Kaiser class for the Germans as they had five of these. 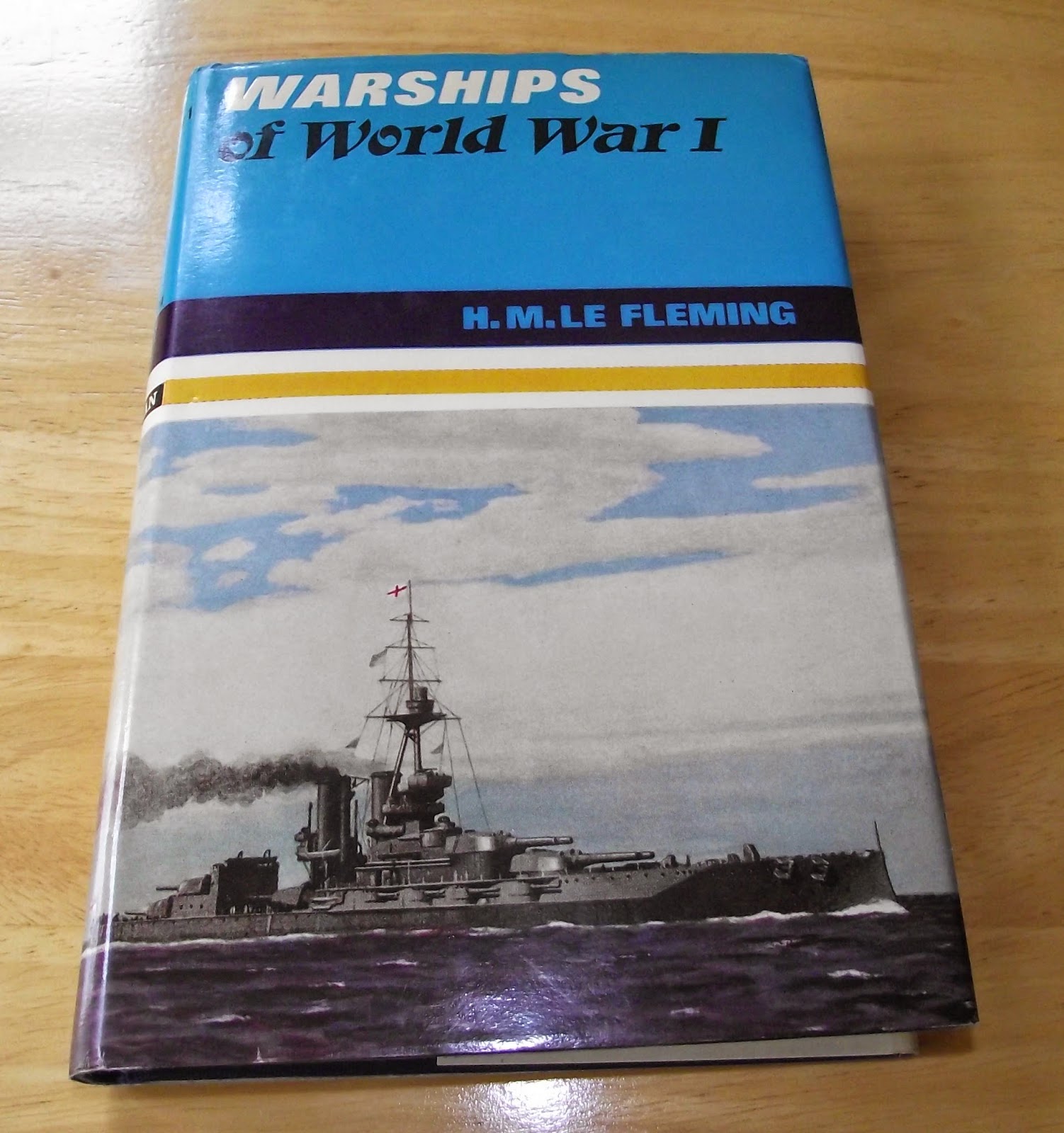 Small but perfectly formed - and a lot easier to carry around than a copy of Conways!

The other piece of news concerning this project is that was able to pick up a copy of the Warships of WW1 by H.M. Le Fleming and published by Ian Allan. This book was one that was on almost permanent loan from the library back in the day and so I was delighted to pick a copy at a boot sale for 50p! I have a copy of Conways and Janes for the period but for sheer convenience this is hard to beat!
Posted by David Crook at 19:02

Very lucky to find a nice copy of Le Flemming, let alone at that price!

I was highly delighted to find this - for the cost it is hard to beat - as it will be a whole easier to carry around than Janes or Conways!

Many thanks old chap! I think the main thing with these is that I really enjoyed the painting - which is a rare thing indeed for me!

These ships look great David. I have nominated you for a Liebster

Many thanks for the comments re the ships - the British are underway as I write.

Many thanks for the nomination as well - it s much appreciated!

You are getting there David
Well done!

The British dreadnoughts just need the bases finished off (waves, flags and names labels) and then it is on with the destroyers.

It is getting there and I am on track to finish the entire set up (at least the WW1 phase of it)by the end of June.