The First of the Royal Navy Dreadnoughts 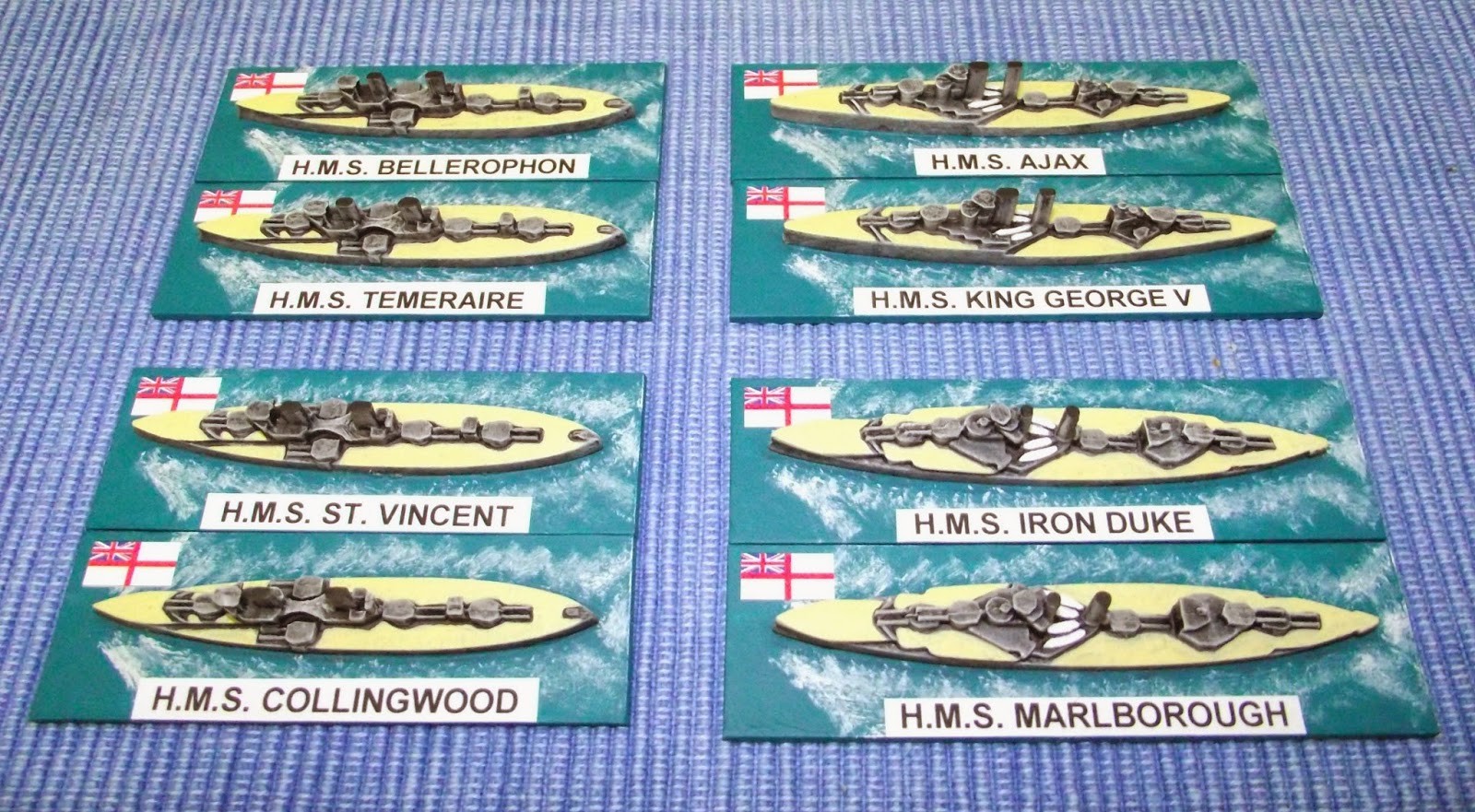 The First of the Royal Navy Dreadnoughts

To start the Royal Navy off in the dreadnought battleship department I opted to tackle a selection of the first 12" gun armed types with some of the later 13.5" classes. For the former this meant the Bellerophons and the follow on St. Vincents whilst the latter were the King George V and Iron Duke classes. In time I will add some of the other 12" types as well as the missing Orions from the 13.5" range. There are some odd ships to be considered - Agincourt, Erin and Canada for example - and I will also want to add some of the 15" types just to round off the collection but whilst the former are some way off the latter is in hand.

The models use my black undercoat with successive dry brushing with grey and with details blocked in. The key difference between the two fleets is that the Royal Navy start with a darker grey as the base (Humbrol Medium Gull Grey). I have used the same colour for the decks for both sides (Humbrol Mast Oak - and I need to find out what the modern equivalent is pretty darned quickly!) and my usual convention of the ships boats being white. Once again the models are from Stonewall Miniatures and are from the former Micro Matrix range.

The Bellerophon class - these followed on from the original H.M.S. Dreadnought and were virtually identical to look at.

The St.Vincent class carried a more powerful 12" gun than the earlier class and had narrower funnels but I have used the earlier Bellerophon casting as it is close enough looking - thereby ensuring eternal damnation at the hands of the rivet counters! 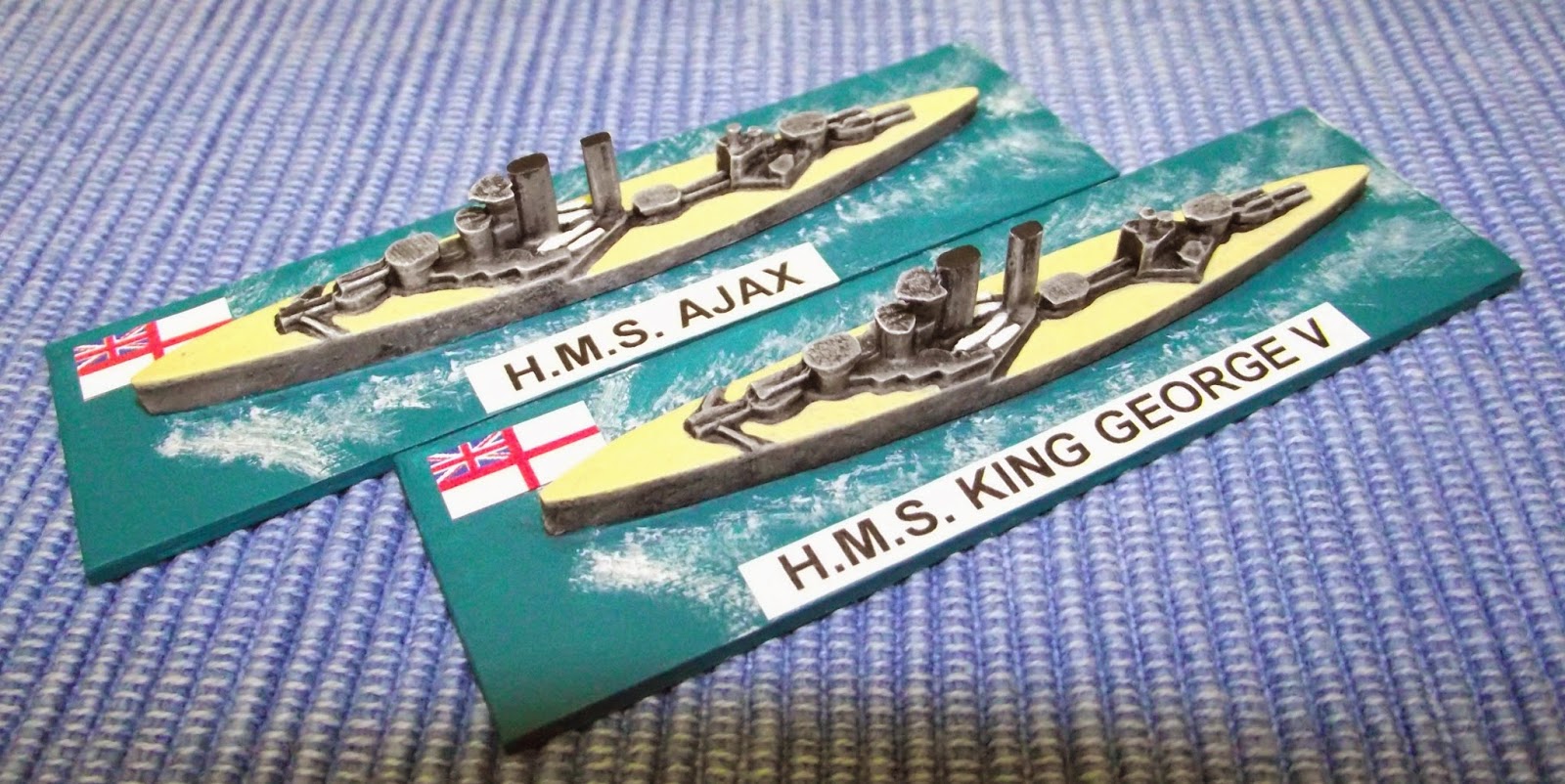 The King George V class were the second of the 13.5" types - the first of which were the Orions. I have a couple of these to paint which will feature in the next batch.

The final class of 13.5" armed battleships were the Iron Dukes which also featured the 6" gun for the secondary weapons, with the previous classes mounting 4" weapons.


The next batch of capital ships to paint are the last of the Stonewall metal models and feature some 7 for the Royal Navy and a single Kaiser class battleship for the Germans. The disparity will get even larger when I get the Panzerschiffe models in as the Royal Navy will be gaining a further 6 ships whilst the Germans will gain only 4.

Some of the metal models will need some preparation before painting (removing the tripods from the Orion class to start with!) so the next batch of models will be the 56 destroyers - of which the 24 I have for the Germans have hit a minor snag - more of which later.
Posted by David Crook at 05:48

It is too late now (you've painted too many vessels) but one thing that I do to help differentiate fleets is to use a different deck color.

In my Pre-Dread fleets the Germans have a darker deck color.

And, while too late for you, the idea might help someone else just starting.


-- Jeff
PS, Your ships look fantastic by the way. I really like them.

Many thanks old chap! For fairly poor castings they scrub up quite nicely.

I had considered that - right after I had started them! Glad you like them though!

They look superb! Reminds me that I need to put in an order or two orders...

Many thanks old chap! The collection is coming together very nicely and will certainly look the part when they start seeing some action.

The collection is really beginning to come together and I am certainly on track to complete the first phase by the end of next month.

Glad you like them - I have really enjoyed spending some time on these!