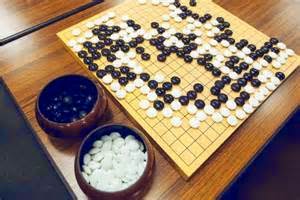 Not the set I have just acquired but you get the idea.

It has been a fuuny old day. This morning we were at a bootsale in the sunshine and this afternoon I was helping a neighbour bail out their front drive which was flooded due to the torrential downpour we experienced. As is the norm our garage got slightly damp in the deluge but luckily not in a serious way.

There was very little at the boot sale to speak of although I picked up a very copy of the ancient oriental board game of Go with one of the 'Teach yourself' guides as well. The game is played on a very nice wooden board with two pull out storage drawers for the pieces. The playing pieces are rather useful comprising as they do 360 black and white discs - rather like flattened sweets. Great for hit markers and similar. I am a sucker for old board games so was pleased to get this and the book for a mere £2.

I spent some time organising the WW1 20mm Middle East collection now that the remainder has been listed on Ebay. I will need a few more bases from Essex Miniatures but the organisation is pretty much set. I am also happy to say that the models have a number of bids on them so the desert Hexon terrain is at last becoming rather more viable.

Finally, I must extend a massive thank you to Mel Spence for a whole pile of Jutland and WW1 naval related goodies - my printer is certainly going to be busy for a while!
Posted by David Crook at 19:05

I used to play Go about a thousand years ago (perhaps it was in the Ancient Orient?). About all I remember is that if a body has two eyes it will live. Remember this and you will never look back - you will be the envy of all your opponents…

Now I think about it, this is probably on p.2 of the instruction booklet.

Visions of you sitting cross-legged and steely-eyed (or was that steely-legged and cross-eyed?)and about to play a dazzling combination whilst clad in a kimono supping green tea has a whimsical charm all of its own....;-)

The pieces will probably see more service than the game but the thought was there!

I used to play this many, many years ago but not in a big way. The set I acquired is very nice though so I may dabble in it once again. The stones are really useful though....;-)