Axis and Allies Part 3....The Shape of Things to Come 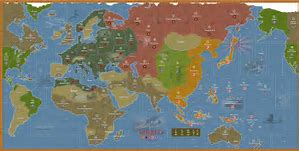 The world according to Axis and Allies
﻿

After my post of yesterday I spent some time messing around with basing ideas and considering exactly what I want to achieve by using Axis and Allies game pieces for my WW2 needs. On the face of it the whole idea probably seems a little odd after all, why pay for a game with oddly scaled models that are not as detailed as easily available scale metal miniatures?

In truth there are no simple answers to this. I believe that I can produce a good game using the components included - be it land sea or air - and that the overall cost will be more palatable. I am conscious that I have wasted a lot of money over the years on models and if I am honest, the thought of replicating what I am planning on tackling with the game pieces using metal models instead is a financial outlay I am reluctant to embark upon. To illustrate my point for an overall projected expenditure of around £150 I will have fleets, air forces and land assets for five nations - or around £30 a go - and this includes basing etc. My solution also has the advantage of having everything in one place - buy the game and you have all the bits needed. I am only buying a further edition of the game (included in the budget, as are the additional pieces that are not available in the games) simply because the extra material adds to the variety of models as well as bulking out some of the existing ranges. In short it is more wargamer friendly.

From a painting perspective these models will be very straightforward to tackle. Given my aversion to this part of our hobby (to be strictly accurate it is my aversion to painting anything 'organic' rather than mechanical!) this is another positive consideration. The ships will be painted in my usual fashion and will feature names and ensigns on the bases and the aircraft will be mounted on flying stands with decals provided by Tumbling Dice. The land stuff I am still pondering over simply because it is an age since I painted anything in this area.

In respect of rules, well, anything goes. The Portable Wargame will feature or even straight Memoir 44 although Sam Mustapha's Rommel will make an appearance at some point. Axis and Allies: Angels 20 will probably be the rules of choice for the aerial stuff whilst for the naval side I could do a lot worse than using good old GQ1 and 2.

Mention of the naval side adds a further element in that the models lend themselves to some basic conversions. There is a very good selection of merchantmen and I plan to use some of these as AMCs or possibly commerce raiders. Some of the other ships could also be tweaked slightly so this is another avenue I can explore. There will be plenty of spares to play around with!

Axis and Allies: The Game

The game itself is designed ideally for multiple players and it has been described as a 'light' strategy game. this is true and if I am honest I am very unlikely to play this as it should be played. The components are very useful (I mean other than the miniatures) and will be used for a number of ideas I have in mind. The map board is also very handy and could be used quite readily for a global based miniatures mega-campaign. In fact one could argue why not just 'wargameify' the board game itself?

Hmmm, turning a perfectly good lightweight strategic level WW2 boardgame into a miniatures based gaming tool? Whoever would have thought it?
Posted by David Crook at 09:20