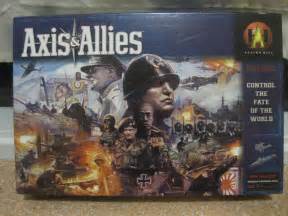 In pursuit of some bits and pieces I need to support my block armies for 20th century gaming I have managed to source a cheap copy of Axis and Allies. The version I have acquired is the 2004 revised edition  which was the last produced before the range exploded into a number of other versions. I am really excited about this as the game is unplayed and all the component pieces are still in their packs. Aside from the land bits and pieces there are also the ships and aircraft to consider. I am looking forward to working with these and already have a few simple rules ideas to play around with.


The ships and aircraft will be painted and based and for the latter I shall also make use of some decals. This will add to the flavour. Aircraft will also be mounted of ‘flying’ bases. The overall ‘generic-ness’ of the models is fairly muted so whilst they are pretty nondescript detail-wise they can be readily identified as to what they are supposed to be. Again, this will add to the flavour. I have also been looking long and hard at the offerings from the two companies mentioned in my previous posts – Historical Boardgaming and Stratak – and will probably expand the Axis and Allies pieces to include some of these in due course.


In many ways there are elements of ‘going back to my roots’ in this latest adventure as making use of materials for purposes other than that for which they were intended used to be very much my stock in trade in the early days of my wargaming. It was a lot of fun and the games I had were real enough to me at the time. Using my block armies over the last few years has reinforced the values I had long since discarded – improvisation and making the best of what you could find  - and has made me look at my wargames from a wider perspective. Well certainly wider than painting great numbers of figures at the very least. I have the utmost respect and admiration for those that choose this approach – it just isn’t for me. Having said that I shall not be entirely removed from the whole figure thing as I shall be using those that come as gaming pieces where I am able, for example the Medieval and 18th Century Risk figures at some point. The infantry figures in Axis and Allies may even get a lick of paint, similarly those from Memoir 44/Battle Cry. Of course I also have the 54mm Foreign Legion and Arabs to tackle in due course so I am not really severing all my links with the world of painted figures. There is now no urgency around painting these though which means I can do them when the mood takes me and not to any timetable.


I fully intend to paint the pieces that I use alongside the block armies though as, and I can almost hear the mocking laughter in the background, the look of the thing is important to me – this is primarily why I prefer the 3D terrain option rather than using a map. Using varying scales of model within the same game is not a problem - there are rules around that happily do this - so I can take comfort from the fact that all I am doing is standing on the shoulders of giants so to speak.
Posted by David Crook at 11:45

Then repeat until you cannot hold a brush!
I just did something I thought I would never do

Argh, I know don't judge me
I was a big fan of SL
Then is got silly .... but the starter pack "seems" tame
Not going to Beyond Valor .. honest