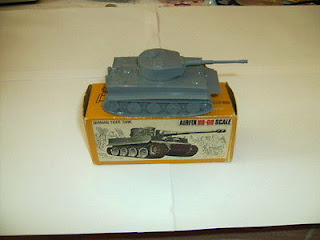 The Airfix polythene Tiger 1 - much coveted 'back in the day'﻿

I am experiencing that circular kind of feeling, you know, that Deja vu kind of thing. Way back in the early 1970s when I first dabbled in wargames my resources were very limited. My family circumstances were very modest and money was never plentiful. My mother was bringing up three of us on her own with yours truly being the eldest so hobby 'stuff' was low on the list of our budgetary requirements.. Figures and models were rarities and limited to birthday presents and Christmas, with the odd acquisition as the result of my paper round. The Isle of Sheppey, located in the Thames estuary(where I come from), did not have a model shop although there were a couple of toy shops that stocked Airfix kits and figures, not to mention a gift shop at Leysdown that did the same. The nearest model shops were on the mainland at Sittingbourne. The only magazine I was aware of was Military Modelling and so I used to buy that when I could. 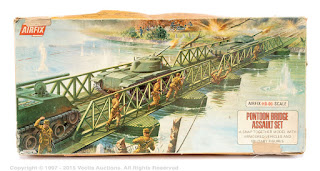 
In order to wargame then I needed to eke out my finances and make do with what I had to hand. In short, I needed to improvise. I can remember using Lego bricks as troop blocks and scratchbuilding tanks and buildings for my games from a combination . The results may not have won any awards but they served a purpose. In the games I fought they were real enough. The release of the Airfix polythene vehicle range was a major boon for my WW2 games – even if the range was initially a little odd. I happily used vehicles as whatever was needed so the Patton tank served in most armies until the Tiger and the T34 made an appearance. The SP was used by everyone and the 25pdr with tractor was used for pretty much any type of towed artillery or anti-tank gun. I never used the tank transporter or the landing craft though. The point I am trying to make is that I was happy enough using models for things other than what they were as I had little choice. Did the games suffer for this? Absolutely not! In fact it was quite handy as it meant that a particular vehicle could serve in any army – rather like Hollywood in a way. I was reminded of this when I recently watched The Battle of the Bulge for the umpteenth time - M48s as King Tigers anyone?


Gradually as the finances improved through a variety of pocket money jobs and so I was able to add into the mix some ‘proper’ models and other equipment. Sadly this came at a price as with this new found ‘maturity’ came the gradual descent into 1980s ‘rivet counting’ rules.


Fast forward to the present day and after I have divested myself of my rose-tinted spectacles I find myself on the brink of doing something vaguely similar but with the benefit of over 40 odd years of wargaming ‘experience’. I have abandoned the rivet counting of yesteryear and so for my 20th century games I will use the blocks and make do with what models I can get to use alongside them. This would not work for many people but suits me to a tee as I generally fight most of my games on a solo basis. It will also make battle reports a little easier on the eye.


It does not mean I am abandoning figures and models entirely – it is just that in order to satisfy a certain requirement this is the solution I shall adopt. 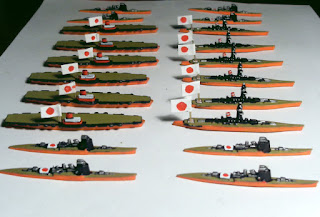 An example of some painted Axis and Allies game pieces


The pieces included in the Axis and Allies series of games also feature a number of ships. Each of the major powers fields a carrier, a battleship, a cruiser, a destroyer, a submarine and a merchantman. These are not consistent in terms of scale but are quite obvious as to what they represent. There also a number of nation specific types available from a couple of suppliers which are useful to fill some gaps in the range. In fact one could build up a navy with the 'correct' ships being used as intended via these suppliers if desired as long as one bears in mind they are not scaled in anyway but are designed as gaming pieces. 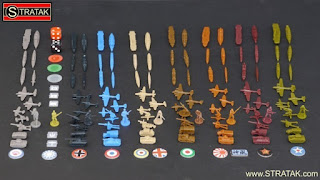 Another supplier of gaming pieces for use with Axis and Allies - the website is on the pictures should you want to take a quick look.
﻿
The Soul Searching bit....
If I am honest with myself I believe that I have been pursuing a wargaming blind alley for years now. I am unlikely to paint great armies of figures - it has little appeal to me for a variety of reasons - or huge fleets of ships (I have tried both) and it many ways this has held me back from my enjoyment of fighting wargames. I do not believe you need to use figures or models to have a good wargame - all you need is a little imagination and a gaming medium that works for you. I want to fight table top battles using whatever I need to - be it detailed models, cardboard counters, wooden blocks or gaming pieces with the proviso that if any models are used then they should be painted.
So there you have it.

My first war-game used the models from the Pontoon Bridge assault set. All are long gone alas. I look forward to reading your progress with blocks and assorted models. I have used paper models from the Peter Dennis war-game books. They proved to be a very effective alternative to normal 3D models.

I have seen a couple of Armada type games using the PD books and the use of 'paper' soldiers has a long history. The Junior General has a lot of similar material as well. I have considered using them on occasion but the rate my printer eats ink cartridges it would be cheaper to but figures and pay someone to paint them!

The Airfix polythene vehicles were really handy and above all cheap - you could get two or three for the price of a kit.

I always find these reminiscences fascinating.... a long lost world. I was well into adulthood before I discovered that war gaming was actually a thing. seriously. Yet it was craving I had from when I was quite young. I took up chess, really, as a war games substitute.

My first war games involved trench warfare; trench lines carved into a dry clay battle field, and clods used as artillery shells, bursting most satisfactorily. The men? Little lengths of straw, maybe an inch long, stuck into the ground. I would have been 8 or 9 years old then.

Later, at age 9 or 10, I made from paper 'ancients' figures with swords. They were single figures drawn and cut out as one piece with a sizeable stand. To five a 3D effect the figures were drawn 'displayed', the sword extended out to the figure's right (no left handed guys in my army), and the shield arm and shield out to the left. After cutting out the arms were bent forward and the shield bent around again to shield the front of the figure.

I used to make 'armies' of maybe a dozen or so a side, and fight little battles with these.

I recall seeing on the back covers of comics advertisements for WW2 or ACW or AWI or Roman armies. I'd look wistfully at those and know there was no way on God's green Earth that I would ever own anything like them...

Now, THAT is what I call a mis-spent youth: no war gaming.

In many ways my choice of wargaming material has to an extent mirrored my rules 'journey'. I started simple, went complicated and now back to enjoying simpler rules once again. In my formative years I used to hanker after more, better and bigger simply because it was seen as the thing to do.

Our hobby is diverse enough in its approach that it should readily embrace the seemingly unconventional. After all every wargame I have ever taken part in has always included an element of the abstract.

All I am doing is taking abstraction into newer directions.

I remember those comic adverts and share your fond memories of them - not to mention the wistfulness!

I cannot believe nobody has said "Burn the witch!"
Only kidding

Whatever floats your boat ;)

I just keep all my stuff in the loft because I know that I have a 3-4 year interest cycle and I cannot be bothered buying the same stuff again ;)

That in a nutshell has been my problem. I have wasted so much time over the years chasing armies and navies for periods that have never really been likely to be used. In many ways I think I have too much choice of what to do which is why using the block armies and simple, generic models makes more sense for someone as fickle as I.

Wargaming is really three hobbies in one as you have the gaming element, the modelling element and the research element. On a scale of one to ten I would say that for each category in the order listed I am a two, a two and a nine. In an ideal world I guess these three should have parity or all be fairly close to each other. I enjoy the gaming side and the research, less so the modelling. If I could get to a four, three and six that would work very nicely.

I also get tired buying the same stuff over and over again so now I am not going to!