One from the archives (was it really 3 1/2 years ago?!). WW1 German battle cruisers in the shape of 1:2400th scale Stonewall Miniatures. The models for the Jutland project have long since gone but I shall be revisiting the scale for the Arab Revolt as the actions envisaged will be a whole lot smaller and more table top friendly! 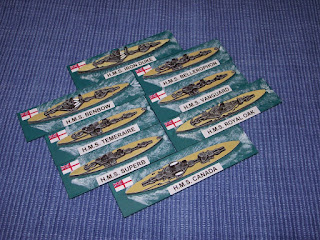 Some of the Royal Navy opposition for the above. Again these are Stonewall Miniatures except for HMS Canada which is a Panzerschiffe resin model.

One of the ongoing problems I have when painting 20th century warships is what colour to paint the decks. As a rule I prefer to use natural wood and indeed, in the past have used the same colour for all ships regardless of nationality. The end result was OK but as was pointed out to me having differing colours for each nationality makes table top identification far easier. With the smaller models I am using – 1:4800th – it becomes even more important.

For the Bismarck operation a number of Royal Navy ships sported camouflage schemes which looked pretty good although I am not convinced about how effective they would have been in service. One must assume that they were though if only because of the widespread use they enjoyed. For the models I am using I shall be sticking to overall grey though, with the Royal Navy ships being a darker shade than that used by the Germans.

My plan is to tackle the decks at the weekend and, assuming all goes well, I should also be able to tackle the funnel tops which will mean that the ships will only need varnishing to be finished. I can tackle the bases the following weekend.

The only other issue I have with this collection concerns the markings on the aircraft carrier flight decks. I shall keep these simple but I have yet to work out how best to represent them. An idea I am thinking of is using a fine tipped paint marker pen. There may be some decals I could use but as yet I have not really researched this in any detail.

If I can get a good weekend painting session in I will be looking at the rather unprecedented spectacle of completing the first part of a project ahead of schedule as the bases are quick to finish. Certainly I will be done by the end of the month.

It was quite a painful process parting with the Jutland collection but it was simply too large to ever use at home. I enjoyed the painting of the models and was pleased with the results so the technique is now my standard for 20th century ships. It even works down with 1:4800th ships as you will see soon.

My wife thinks I have as well but I really do not - if anything I an rather too ruthless when it comes to disposals!