The Battle(s) of the River Plate 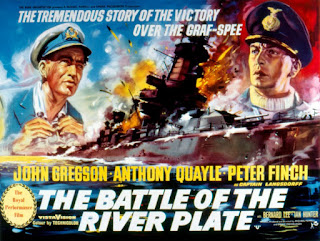 Methinks I need to do two things because of the above. 1 - paint up a Graf Spee with Ajax and Achilles (yes I have the 1:4800th scale models already) and 2 - try and watch Sink the Bismarck again....

Timing is everything they say and so it was that I noticed that available on BBC IPlayer was the 1956 British Film: The Battle of the River Plate. Needing some timely inspiration before painting the WW2 ships this coming weekend I decided that downloading and watching this would be a good idea - purely for research purposes of course....

I have seen the film but it was many years ago and so some of my memories have dimmed somewhat by the passage of time. I was very glad I did if only for the opportunity to see some actual WW2 era warships going through their paces. The full list looks something like this:

The film is very 'Brtish', complete with stiff upper lipped officers and 'gor blimey' style other ranks, excitable South Americans and brash American radio commentators - all very stereotypical and very much of the times, but overall it was very entertaining in a 'sunday afternoon after a large, torpor-inducing roast lunch' fashion.

The one thing about the film that I had forgotten about were just how many subsequently well known actors had parts in the films - including Christopher Lee and Patrick Macnee.

Details of the actual battle can be found here. 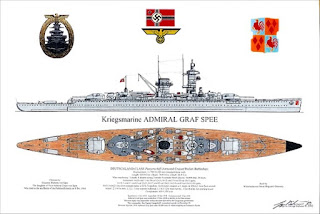 Initially designed to 'outshoot what it couldn't outfight or outrun what it couldn't outshoot'. In the film Captain Langsdorff (played by Peter Finch) said that he only ships that could successfully catch him to force an engagement were the Hood, Repulse and Renown. In reality Graf Spee was only marginally faster than some the more recently modernised WW1 vintage Queen Elizabeth class battleships.

I must confess to having a soft spot for any naval wargames that is 'raider' related and also for the ships of the Deutschland class. I have fought River Plate on many occasions with a variety of rules and the results are invariably the same - the Graf Spee gets royally battered whilst usually sinking at least one of the Royal Navy warships.

There is an expansion to the Avalon Hill game Bismarck that extends the search boards into the South Atlantic expressly for the Graf Spee campaign. For completeness sake I shall look into this further.

Your comment about the speed of the Graf Spee is spot on. When the Germans later in the war were attempting to put together a small TF to challenge the British arctic convoys an interesting thing occurred. The Deutschland class ship stationed in Norway was actually excluded because her top speed was about four knots slower than that of the other German capital ships.

I love that film!

My rather limited experience at sea was closer to WWII than it was to today (Rather uncomfortable as that is to say!) so the ships and navy in the movie were somewhat more recognizable than what glimpses one gets of modern era ships.

Interesting coincidence that this was written and directed by 'The Archers', Michael Powell and Emeric Pressburger, who also created the wonderful 'A Matter of Life and Death', which featured in your last posting. I think either this or 'Ill Met By Moonlight' ( another wargame idea? ) was their last film together.

I seem to remember reading that somewhere. I was surprised to read that the German 11" gun as carried on the Deutschland class as well as the Scharnhorsts had a prodigious range and was a very highly regarded piece of ordinance.

Certainly Langsdorff in theory could have kept his assailants at arms length should he have wished to.

It is a good film and certainly seeing some actual WW2 ships being put through their paces was good to see - even allowing for the shot of the disarmed HMS Cumberland!

It is a little dated though and one wonders what someone like Peter Jackson could do with the subject matter.

I did not know about 'Ill Met by Moonlight' although I ma very familiar with the story. It is a film I have not seen so should really rectify this as the Mediterranean during WW2 (especially the Greek theatre) is of particular interest.

I hope all is well with you.

It is one of my favourite war films, and chock full of famous Btitish actors. I could watch it every week for a year and not get bored.

It is an ‘oldie but a goodie’ for sure.