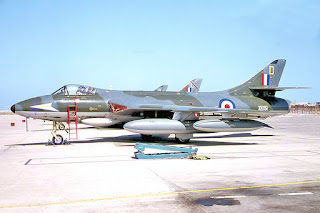 Hawker Hunter ground attack FGA.9 as deployed to the Middle East during the Aden Emergency

Later than usual this week but for a very good reason! The Canadian branch of the family consisting of my brother in law and his wife are in the UK on a visit and so we were entertaining them over the bank holiday weekend.

I have mentioned previously but my brother in law, Gordie, is an ex paratrooper that initially served with 3 Para before transferring to the pathfinder unit of 1 Para. During his 11 years under arms he served during the Radfan campaign as a GPMG gunner and is always willing to talk about his experiences. He freely admits to enjoying his time with the colours and maintains contact with many of his ex comrades in arms. Time and the rigours of service have left their physical mark on him and so back, knee and ankle problems are the common lot of the ex paratrooper! As a pathfinder - incidentally serving alongside the S.A.S - Gordie was involved with HALO drops from around 20,000 feet. He has a professional respect for the RAF and regaled me with tales of when he undertaking parachute training at an RAF base - apparently the standard of RAF cuisine was far higher than that within the Parachute regiment! He also told me about the air support received from RAF ground attack Hawker Hunter FGA.9s during the campaign and how effective it was - especially the nose full of 30mm Aden!

Naturally the three days we spent with Gordie and Diane were not entirely given over to matters military and so we went out on a couple of trips, dined out and had a really good time. The invitation to visit them in Vancouver is something we will have to seriously consider!

The great packaging of the figures winging their way to their new owners continues with the plan to ship on Saturday. It is not difficult to do but it is time consuming. The good news though is that I will at last be able to see the floor of the man cave!

My order to Spencer Smith will be on its way today for the last of the ACW figures and I have also taken the opportunity to sort out the 1:2400 scale ships I have from Tumbling Dice. I am itching to get a game in at some point so all this sorting out has served to heighten my enthusiasm so I may well be rolling some dice over the coming weekend.

I am not sure what with though!
Posted by David Crook at 09:08