U Turn? Moi? A Marlburian Reverse 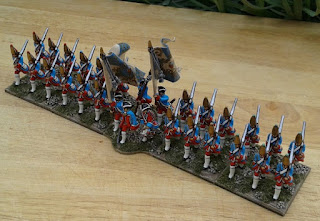 Spencer Smith Grenadiers painted by the redoubtable Iain Burt (whom I have not seen for many a year but I am sure he will not mind me showing these quite exquisite figures!)

Most readers of this blog will know me as a level headed, stable and focused chap - always tackling new projects with an eye for detail and seeing them through to completion....

Then I woke up....(and I can almost picture the multitude of raised eyebrows!).

Whilst I am having a minor break from sorting out the vast unpainted collection of Eric Knowles I have been able to sit back, pause, draw breath and think about the next phase of my own particular brand of wargaming madness.

You will recall that in return for my efforts with this undertaking Bill, Eric's son, had very kindly offered me some of the figures for my own use and after much chopping and changing of my mind I settled on the Minifigs portion - mainly because I thought this would be the part of the collection that would be hardest to dispose. Up to a point this is true but I have certainly made some inroads into the collection - especially for the Seven Years War and the English Civil War. I would say that half of the former and all of the latter have been accounted for and so the main bulk of what is left is for the Marlburian period with a smattering of Napoleonics.

My plan was to make use of the Marlburians (of which there is a prodigious quantity) for my planned Balkanesque set up for circa 1710 to 1720. I am now not so sure I want to do this, at least using Minifigs 25mm figures anyway. For sure there is plenty of choice of figures and any shortfall could be readily addressed by an order or two to Caliver Books who currently own and produce Minifigs. I have had this nagging feeling of 'doing it because I can rather because I should' or to be more accurate, 'doing it because all the raw material has been handed to me on a plate regardless of whether or not I actually wanted it!' I am certainly not being  ungrateful at Bill's incredible generosity but I keep asking myself do I like the period enough to invest the time and energy needed to realise it on the tabletop.

The answer is probably not and so I have taken the decision to add the Marlburians to the disposal pile. I feel better in myself having decided this as receiving this unexpected windfall in terms of huge quantities of figures at no cost sat a little uneasily on my conscience.

There is a postscript though. The one thing that rummaging through all this 18th century material has done is to remind me that it is a period I really need to do something with and indeed, I certainly have an ongoing interest in many facets of it - anything from 1740 to 1780 really. If I am to tackle a project in this period (actually that should be 'when' rather than 'if') then I have my own ideas on the matter and for a variety of reasons using Spencer Smith figures is very much at the heart of it.
Posted by David Crook at 16:36