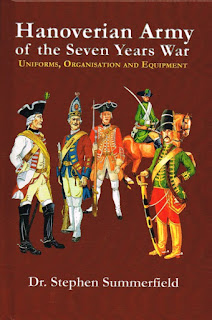 I have never seen a copy of this and nor do I intend buying one but it certainly looks like the kind of book I would really enjoy!

This weekend saw some fairly significant moves in the man cave. I managed to package up nearly 50 Kg of unpainted metal across 7 parcels - all heading to the same place I hasten to add - which is now winging its way to its new home. I also filled up half a large recycling bin with old Hinchliffe, Greenwood and Ball and Alberken figure boxes - all of which carried the dust of ages and scribbled notes - so at last I can see the floor in the man cave! With a couple of exceptions everything else can be re-crated and stored far less intrusively under my gaming table. Once this is done I can then hoover, dust and polish - a fact of which SWMBO has, ahem, encouraged me to do although to be fair she has a point as the entire loft looked liked something out of Steptoe's Yard!

There was thing I had overlooked. Whilst moving crates around and repacking some of the remaining units I rediscovered the Seven Years War Hanoverian army Eric had acquired. Judging by the figures used  - the customary multiple manufacturers Eric routinely employed - I am of the opinion that this is one of his earlier armies as there are a number of Minifigs S Range types present. Some are even partially painted. I shall be taking a closer look this evening and will post to the blog if there is anything interesting. 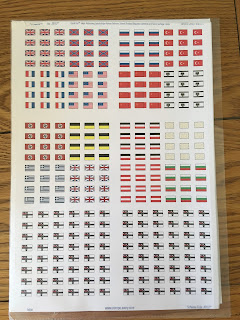 Flags for the memory (there are two sheets of the above). Rather than regimental standards I opted to use national flags. In many cases this means two or even three variants. The eagle eyed will not the use of the revolutionary war flag for the US of A with the circular 13 stars. I have the more usual version already.

Around the middle of last week a small order from Tony at Brigade Models arrived in the shape of a couple of flag sheets he kindly prepared for me. These are going to be used for the command blocks with my block armies (not the WW1 German Naval Ensign though - this the normal size I use for my ship models) in conjunction with a number for identification purposes. If you recall my plan was to use a quarter size block (roughly 15mm wide x 12mm high x 20mm deep) as a command block complete with a flag to show the orientation of the unit. Having the unit number will help with identification when using a roster to record casualties. Now that I have the flags I can press on with this stage which will mean I can use the blocks 'off the grid' so to speak although Tony has made such a good job of them I am thinking they will be used on grid as well.

This will be a simple job but it is one that I can tackle easily enough. Having the unit flags with numbers will make the battle reports far more easy to follow and will also add to the personality of the armies represented. This in turn will enhance the gaming experience. There are slightly more flags than I have blocks for but I have more than sufficient for my current needs and can get extras cut should the need arise.

The one standard I will be sticking to though is that block number 1 will always be the army commander.
Posted by David Crook at 15:27

So, now - let's see. If I can just check your statement here, sir, it says that you were moving some crates around, to facilitate cleaning and tidying of the premises, when you chanced upon the entire Hanoverian Seven Years War army.

Did you expect such a happening, sir? Does this kind of thing occur frequently on your property? I hope you will forgive me if I venture the opinion that this sounds a very strange event indeed. I'm sure I don't know what to make of it at all.

Excuse me a second while I lick my pencil...

‘Twas a strange occurrence to be sure but such is the enormity of Eric’s collection that finding an army or two lurking under some other crates - usually as a result of yours truly forgetting he had placed them there in the first instance - is a matter of little importance....

Sorting them out will be job for Wednesday evening.

A lesser mortal would see an opportunity to acquire additional models under the smokescreen of Eric's collection .. Blood Red Skies .. mu word must have bee a prototype set (the Mosquitoes look worth it alone)

At first glance there appears to be a reasonable chunk of Minifigs - including the S range - but the collection goes right up to Front Rank. I will know more once I have had a rummage through the crate.

I noted your acquisition of a load of PSC 1:300th Battle of Britain kit - I assume this was of the original soft plastic models but what the heck, £5 is still a bargain! - so I am intrigued about the Mosquito.

There is a game in there somewhere and it certainly reminds me of a refight I took part in of the climax from 633 squadron using the board game Air Force.