Old School Miscellany with a Cat 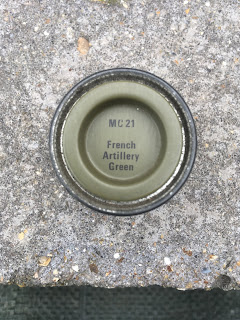 A real blast from the past and once opened and properly stirred was as good as new!

The Weekly Sitrep will feature some good news re the ACW collection but for now I wanted to share some old school items that may be of interest. The first item you see is an unopened tin of Humbrol enamel paint - in this case from the Aunthenticolour range. Wargamers of a certain vintage will no doubt remember these tins that were used ny many a gamer in the days before acrylics were readily available. I own around three hundred tins of Humbrol enamel of various ages and still have around thirty or so from this range. I have two unopened tins of French Artillery Green and for the life of me I cannot remember why I acquired these because at no time during my gaming career have I ever considered a French army that would use this colour! They are about to be put to good use though as my 30mm ACW artillery pieces are going to be painted in this hue.

For the record some of these tins of paint must be around thirty five to forty years old! 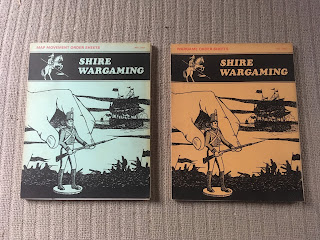 As well as revisiting my collection of very old Humbrol enamels I also came across these two items that were presented to me along with an assortment of wargaming books by Bill from the collection of Eric Knowles.

I remember back in the day owning a couple of the Shire Publications wargames titles (which I believe are available from John Curry as part of the History of Wargaming project) and seeing these pads advertised but never owning either. Of course nowadays producing such things would be a whole lot easier with the mass availability of home computers but at the time they would have useful.

I was rather interested by the inside cover of the wargames order pad which you can see below. 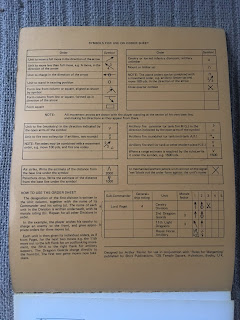 The inside cover complete with order notation suggestions and an example of the system in use. 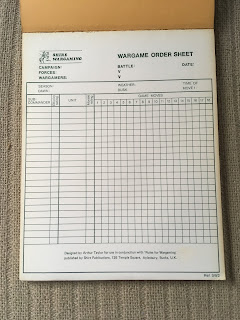 The order pad itself. Neither of pads have been used and to be honest the squares for orders are rather on the small side but it is useful all the same.

I had planned to add the John Curry produced compilation of the Shire rules to my collection - not because I am likely to use the rules again (I did back in the day a couple of times with my Airfix 1815 Allied army) but because they do form a part of my own wargaming story. 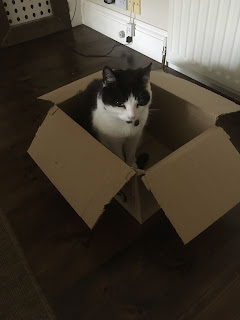 Mango in the infamous box - this time carefully positioned on the floor and at the other end of the lounge away from the painting table! I knew she would not be able to resist the temptation!

I have some pretty good news re the 30mm ACW collection but that will appear in the Weekly Sitrep which I shall be posting tomorrow - and when you read it you will understand the delay....

If kids love playing with empty boxes, why not cats. They are small members of the family after all.

They certainly are! Both of our felines used the box in the location I placed it and so my painting was stress-free!