Fire and Furry....A Tail of the ACW 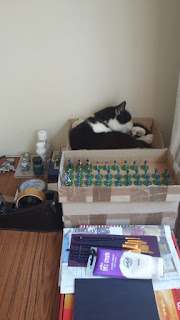 They say a picture is worth a thousand words but in this case it is just the one - and I will leave the choice of expletive to you....

I had a rubbish day at work yesterday. Pretty much everything that could go wrong did (with but a single redeeming bright spot) and so the endless stream of client and candidate related mishaps seemed unrelenting. I was hugely relieved when eventually it was time to make my weary way home! As I headed out from the office a WhatsApp message appeared from my beloved timed as having been sent at around lunchtime.

“What is under the cat do I need to move her?” Said the message (and see the picture above for what she was describing). I looked at the above picture with a sickening feeling and was really not sure how to respond. The scene was from some five hours before I had seen it and I was willing to bet that Mango, the offending feline, would have moved on to pastures new so the damage, if any, would have already happened. This was the icing on the cake of a horrible day as far as I was concerned.

When I eventually got home, cursing a cruel fate and generally feeling sorry for myself, the first order of business was to see what had happened. The first thing that struck me was that everything that was on the top of the box (which was closed) was now inside which in itself was a shock. For the record the top of the box had a newspaper, two emery boards, a bamboo skewer, a paint brush, two packs of MDF bases and some grip top plastic bags, not to mention a newly bladed modelling knife. Mango has completely ignored all of these anti cat obstacles and had calmly curled up on top of them and on the box and had gone into a blissful and no doubt untroubled sleep.

It what universe could that position have possibly been comfortable? Not being a cat I have struggled to understand how she was able to manage it, especially due to all the paraphernalia she was curled up on.

The box contained two Spencer Smith 30mm ACW cavalry units and six guns. The cavalry were deployed facing each other with the swords pointing towards the centre of the box, guard of honour style. Mango is a small and light feline – if it was her daughter then the table would probably have collapsed – but her weight was sufficient to stove in the box lid and so her weight was supported by ten cavalry swords with the obvious result – swords bent into passable impersonations of fishing hooks. I was able to straighten them out (some of them are now weakened on the bend so to speak) and by a copious application of super glue have hardened the weapons (oooer missus) sufficiently to render them proud and erect once more….

The box now has a cat proof cover that will enable her to sleep on the box rather than in it.

Damned felines, you were lucky all the same, as they say it might have been worse!

Sounds rough David. Glad you've go that box covered, but let's face it being a cat she'll just find the next most vulnerable spot to sleep.

It's one of the problems with having cats; they seem to have an unnerving ability to walk, sit, and sleep EXACTLY where you don't want them to. Luckily, the damage seems to have been repairable, although I'm sure that whereas anyone else won't see the repairs, you will because you know it is there.

My heart goes out to you!

Any sentence that contains the words "cat", "box" and "toy soldiers" is always going to end badly. Glad to hear that the damage was repairable.

When I looked at the picture, I thought you had played it clever by laying out an empty box for the cat. Neat way to keep the other stuff safely in open boxes, was my thought. 'Cos you know cats - any cattish sort of creature - has this thing about boxes, eh?

Never been able to figure that out, actually. Lions and tigers and suchlike ilk seem to home in on boxes, too, if one hoves within their ken. It's not as if boxes are all than common in nature - not exactly a jungle item...

Trying to keep up with your blog .. a second look at the photo stunned me into "silence" .. then incredulity when I read what had happened! A lucky escape for all!

She did look cosy ;)

"by a copious application of super glue have hardened the weapons (oooer missus) sufficiently to render them proud and erect once more…."
I'm not sure if I should say this, but the Devil inside me (see how I dodge personal responsibility) wants to say "weapons are not normally affected this way when laid on by by p.... no I wont say it. I will resist.

I long ago gave up being surprised at where a cat can go and where they can sleep. Did I ever mention the day my old cat Hermes taught me the end support for a shelf full of 25's should be closer than 6" to the end in case a cat should sit on the overhang? (Tilt!)

Glad it wasn't worse than it was.

Many thanks one and all for your kind words of support at this difficult time....

Seriously though, it could have been worse and at least the offending feline was not damaged in any way by being potentially impaled on a bamboo skewer or disembowelled by a modelling knife!

I checked the models again this morning and the super glue trick seems to have worked pretty well. Luckily the bend in the sword was effectively supported by the hilt and the horse's head meaning that any blobs of glue are virtually invisible. You will see what I mean when I post pictures of them when they are ready.