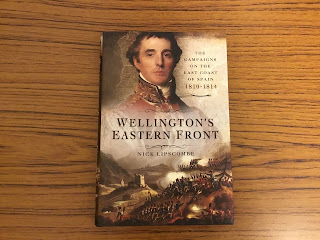 Not as well known as Wellington’s theatre the war in the east of Spain was of pivotal importance in the overall scheme of things.

As part of my research into the latter years of the Napoleonic Wars I have recently been looking at the war in Spain. Naturally enough the main focus of much that is in print (or indeed, out of!) revolves around the exploits of the Duke of Wellington as he made his way from Portugal to France. What I was only vaguely aware of though was the extent of the war in the Eastern half of the Peninsula. When I saw the above title (and being familiar with the author’s quite superb atlas covering the war) I immediately ordered it and it is a cracking title for sure!

From my limited knowledge of this part of the war it appears that the allied operations (which featured both the Spanish army and a lot of assorted irregulars) were very much designed to tie down the French. The Royal Navy was active in supporting the allies and there was even use of the Sicilian army as well. This would be fertile ground for me as the mix of troops would be suitably eclectic and with actions that would be smaller in scale. Ideal Portable Napoleonic Wargame material and with bags of mini campaign potential.

The Del Prado collection would furnish the French and the British but I suspect I will need to look further afield for the Spanish and others. Something to ponder as a bolt on to the Napoleonic project for next year.

A neglected area of the Peninsula War, but one of great interest due to the mix of troops involved, so definitely worth more research. I have some 'surprise' books bought by yours truly under the Xmas tree, one of which covers the campaign, so it will be interesting to read about this part of the campaign.

As soon as the mention of Spanish Irregulars, the Spanish army and the Royal Navy was made my curiosity was aroused! This will be one to savour and I hope that your Christmas prezzies have a similar effect!