Even More on a Napoleonic Adventure 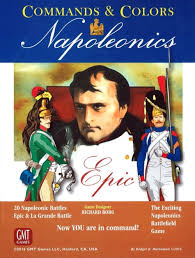 Plenty in the box but needs every other expansion to make the fullest use of it. Good job I have them then! 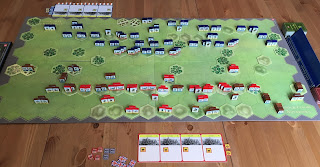 I never tire of seeing this battlefield - images of Christopher Plummer and Rod Stieger circling as I do - and take a look at that board - it is truly Epic....

As the owner of expansions 1 to 5 for Command and Colours Napoleonics – and woefully underused they are as well I might add – I was wary of another addition to the collection without it adding some tangible value. I am of course referring to expansion number 6 or Epic Napoleonics. Boardgamegeek has the following to say about the expansion and there is little I can add so I will not bother!

“EPIC Napoleonics is the sixth expansion for GMT’s Commands & Colours Napoleonics game system. EPIC Napoleonics allows for fighting larger battles with more units. EPIC Napoleonics is actually two game systems in one – the Epic Battles system, and the La Grande Battles system. Although the scope of our Napoleonic game has changed size wise, the historical feel and the basic rules of play, for the most part, remain the same. To experience the maximum enjoyment with these two new Napoleonic game formats, both EPIC Napoleonics and La Grande Battles scenarios are best played using the Command card and Tactician card decks that were part of the Generals, Marshals and Tacticians expansion.
Included in this expansion are six standard sized scenarios that focus on key phases of the battle of Austerlitz, 2 December 1805. This expansion also features 12 EPIC sized engagements and two La Grande Battle scenarios. Also included are two double-sided mounted maps. The EPIC sided battlefield is larger, and at 11 hexes deep by 20 hexes wide, it is almost double the size of the standard size battlefield of 9 hexes deep by 13 hexes wide. When laid side-by-side to form the La Grande battlefield, the battle area is a whopping 11 hexes deep by 26 hexes wide.
In an EPIC Napoleonics game, one player on each side assumes the role of the Commander In Chief (CIC). Each CIC has a hand of Command cards and on a turn must play one card from his hand to order units in one section of the EPIC battlefield. Also on the turn, the CIC must select one card from the Courier rack to play. The card selected from the Courier rack will also order units in one section of the EPIC battlefield. There are only three sections in the EPIC battlefield (left, centre and right) and with two Command cards played each turn, the action quickly becomes very fast and furious.
The Courier rack is a new game mechanic, and starts each battle with five Command cards that are visible to both players. Each turn one card is taken from the rack, so the choice of cards a player has each turn is reduced, until there are only two cards remaining on the rack. The rack is then filled back to five cards before the next player’s turn, and the card selection process from the Courier rack will start again.
EPIC Napoleonic will allow two or more players to enjoy a truly Epic size battle, but it is important to note in order to play most EPIC Napoleonic scenarios, players will need a copy of the Commands & Colours Napoleonic game and its expansions (Spanish, Russian, Austrian, Prussian and Generals, Marshals and Tacticians) This EPIC Napoleonic expansion will only provide enough units and terrain to fill any gaps”.
I know, I know – what on earth has he gone and gotten himself into now? Well if truth be told and in my usual roundabout fashion (aka how I justify what I am doing and how I am doing it) this game has kind of ‘squared the circle’ for me. I cut my teeth on Napoleonics back in the 1970s and the period as a whole has never really gone away. I could never see myself raising multiple armies using hundreds of figures - even smaller scale, 15/10 or 6mm - for the period as there are too many parts of the whole I am interested in. Replacing the blocks with figures on a one for one basis would certainly work though and to be honest is the only way I could see myself doing this. As a result the armies would be large Portable Wargame sized or Dan Mersey’s Rampant-like, very similar to my ACW set up.
There is a smattering of Napoleonic figures available from Spencer Smith which could possibly work well alongside those available from the Del Prado range. The biggest problem for me is really that of choice as to what historical campaign I would get the most mileage from. My fondness for 1815 is well known but I could readily add 1812 in Russia and the Peninsula War, not to mention 1809, 1813 and 1814. Taking that as a whole then you could say the later Napoleonic period rather than the ‘classic’ era up to 1807.
I am keen to get more use out of this collection and certainly all the tools are there. Whilst I like the idea of reproducing the armies with figures it is fair to say that unless something radical happens this is certainly some way off.

Which campaign or 'period' is one of the biggest challenges for Napoleonics IMHO. If I had to choose, I would probably go for the Peninsular War, as the British troops could be used for the War of 1812 as well. A close second is the Danube campaign, only because we have Austrian friends and the Austrian army is a favourite of mine from the SYW through to the 1860's.

Just bought the re-issued base game for myself as a Christmas present , busy stickering up the blocks now .

The game allows me a far greater choice of campaign than using figures when you consider the differences in how armies fought and looked from the 1805 to 1809 period to the latter 1812 to 1815 version. That is certainly a valid point and the later British in America and indeed, it was that particular war that has drawn me back to my Napoleonic roots so to speak.

Assuming I ever get around to using figures then my feeling is that it would be the latter option.

I have the blocks for Expansion 6 to label and whilst fiddly does have a certain therapeutic value!

Never played the system David although plenty of people have written about it extolling its merits. Heres something radical to consider.I have made the decision to sell all my Napoleonic armies that I lovingly put together. They are all 6mm and based for two rule sets, Volley and Bayonet and Blucher. The V+B armies are, Russia, Britain, Spain, Saxony and the remains of the many French corps that were rebased for Blucher. The Blucher armies are the Austrians of 1809, all six+ corps and the French army of 1809 and the Imperiale Garde for the 1813 campaign. Im certain they would adapt perfectly to your game systems.

Now that is an angle I had not considered. Drop me an email on roguejedi@btinternet.com to discuss further.

I always liked Volley and Bayonet although I only ever used the original version.

I must confess .. when I got my Napoleonic Command and Colours i completely forgot about your Blocks

Aside from the C and C blocks I have quite a few others....