Imagi-Navies and the power of MDF 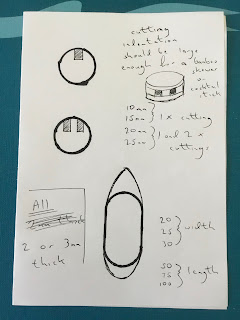 The sketch featuring the turret idea and.... 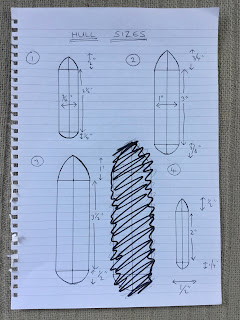 ....my generic hull templates. The plan is to use multiples of these to build up the hull to the desired height on a laminated basis.

Regular readers of his blog will no doubt remember the great ACW shipbuilding project I undertook several years ago now. I fashioned some fifty odd river vessels including casemate ironclads, stern and side wheel gunboats and all manner of bits and pieces. It was great fun to do at the time and indeed, some of the models even appeared in a few of the games I fought. The models were recognisable as what they represented although whilst tidy looking were quite crude, with little in the way of detail. They looked the part and certainly did not disgrace themselves when used alongside my block armies.

I have also mentioned about the great ship building program undertaken as part of Eric’s South East Asia naval campaign. Many ships were conversions of existing models but a fair few were built from scratch by all the combatants. I know the models I built made use of components from other kits and the inevitable spares box that eventually grew to be large enough to have its own post code!

It was all great fun and is something I really enjoy doing. I do not profess to be a super detailed diorama quality modeller by any stretch of the imagination but I can turn out simple looking stuff that is effective. I have, over time, scratch built three fleets of dirigibles for use with the game Aeronef (using aircraft bombs from various scales of kit to provide the hulls), the ACW ships already mentioned as well as some Sci fi stuff, starships, grav tanks and similar. All good fun and incredibly satisfying.

One of the things that is always a problem when scratch building models is consistency. By that I mean when one needs to make the same model multiple times. I have managed to get around this by copying hull templates by stacking them up and sanding them together or by making sure that I have sufficient raw material in the quantity I am likely to need for multiple copies.

The one thing that really stumped me though, was turrets. I am talking about early circular turrets. I had a whole raft of problems with these. Getting them the correct size and shape gave me untold amounts of grief and I could never get them right.

I think I have hit upon an idea though that will render this problem a thing of the past and if it works out will revolutionise how I build model ships or anything that needs a turret.

My ship modelling technique uses primarily balsa wood with things like coffee stirrers, ice lolly sticks, dowel rod and plastic odds and ends. Making the hull involves drawing the shape out on an appropriately sized piece of wood, cutting it out roughly and then sanding it to the desired shape. It is oddly satisfying but it takes time. I also had an idea about this as well and again, as with the turret idea, if it comes to pass it will save me a massive amount of time.

In each case what I have done is to sketch out what I want and have then sent these over to those very nice people at Warbases. They are going laser cut the desired shapes in MDF and all I then need to do is to use the hull and turrets (if required) to produce the ships I want. The saving in time will be enormous and the consistency of shape and size will ensure that the finish is really slick looking. I opted for circular turrets to begin with as these are typical of the ACW period and later although I will happily use them for the pre dreadnought era.

I mentioned earlier that my models tend to be ‘based on’ rather than historically detailed. This does not bother me and indeed, for the ACW makeshift warships were very much the order of the day - especially for the Confederates. I will be making representative ships for both sides and I plan to have some that can be used either side by the simple expedient of a change of flag.

I envisage making gunboats for the Colonial period - there is an idea behind this - and also tackling some ships for the pre dreadnought era. The types modelled will be representative and there will be an obvious nod to the actual navy being depicted on the tabletop. The names will be fictional but will look recognisably like those of a given nationality.

The ACW models will be first though, and I have a couple of ideas around what will be built. In the meantime though, I will need to wait on Warbases to get the order to me and then the fun can begin.

There is something so incredibly satisfying about scratch building your own models. However using the option offered by Warbases to do a lot of the donkey work is a no-brainer. I look forward to seeing progress on these ships and it might even inspire me to make some of my own...

I am looking forward to getting some ship building in and whilst the resultant models are never going to win any prizes they are great fun to make and the experience is very rewarding.

The plan is make models that are ‘based upon’ rather than being microscopically detailed - call it the Hollywood version if you like!

If the Warbases plan works out then there are other things that could work with a similar treatment.