Whilst in something of a naval vein I noticed that the indefatigable Mr. David Manley has been ‘at it again’. He has just written and published this rather spiffy tome which is, as is usual with output, a stonkingly good piece of work! 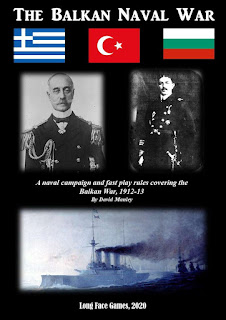 Available from the Wargames Vault this is a really great publication covering, as it does, a smallish war that is ideal for a mini campaign and would not cost vast amounts of money to set up.

The PDF contains a potted history of the war and the combatants, the Broadside and Salvo fast play rules and a campaign system including a map and the appropriate counters etc. I am probably biased but this is a Great War to fight naval battles in as the numbers are modest which makes it ideal for solo play or a club mini campaign. Just to help out I have listed the ships available and their proxies from the Navwar list as follows:

For the non-naval gamer I cannot recommend this highly enough as it is manageable, tactically challenging and a great introduction to naval wargames.

If you haven’t already seen Archduke Piccolo’s blog today about his latest project, you should do! ( http://archdukepiccolo.blogspot.com/2020/08/a-new-project-that-isnt.html ). He is using my old Balkan Wars Matrix Game as the basis for an imagi-nation campaign ... and its looks really good! It is seriously making me think about following his example ... but I’m trying to resist the temptation,

Hi David -
Bob mentioned your review of a recent book upon the naval side of the First Balkan War, so, here I am. I hadn't really planned on incorporating naval aspects of the campaign (and may yet find it in me to resist the temptation) but it does bear consideration. The question is, to what extent do I want my Balkans ('Blacklands') campaign to become a REAL new project?!

I could possibly have justified the omission of the naval side on the grounds that the opposing navies cancel each other out (protecting coastal flanks, interdicting combined operations and coastal landings and such - a bit of a stretch along the Ionian Sea coast, maybe, for the Turks!).

I'll give it some thought. After all, I haven't bought a war games book for months...
Cheers,
Archduke Piccolo.

The weirdest thing is that I was actually thumbing through the article you had written (it is my scrapbook of articles and similar) Sunday evening! The Archduke’s idea looks really good and I am really excited to see what he does with it - I hope that the naval distraction will give him another avenue to explore!

I really like the spin on the area you are thinking of and it will make a tremendous setting for a campaign. I flirted with something similar using elements of Bob’s World of 1891 - Fezia, Rusland and others - but it never really got off the ground in a formal way although I did fight a number of games using the block armies.

David Manley’s latest is as cheap as chips in respect of the PDF and contains much of interest. As a suggestion what about looking at the composition of the historical navies but translating these into your own ideas? This would add an additional dimension but would still fit with your overall scheme.

Even if you did not use it for your campaigning background it is still a cracking production.

An intriguing what-if would be the Greek purchase of the two old US pre-dreadnoughts happen slightly earlier.

Absolutely! Back in the day I had The Greeks and the Turks in 1:3000th with all the ordered and hypothetical ships - so the Greeks gained the battle cruiser Salamis (Never built) and H.M.S. Birkenhead and Chester whilst the Turks got Agincourt and Erin as well as some destroyers.

That certainly mixed things up a little I can tell you!