The Way We Were…. 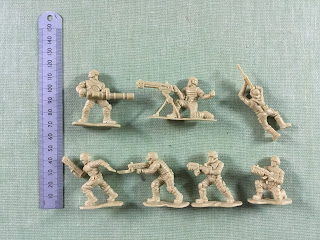 Not a bad selection of types. I have around 75 of the above moulded in three colours - the shade you see above, red/brown and green. Not bad for 50p for three bags of 25 or so figures - £1.50 in all. They look rather like the troops from the film Starship Troopers.
Now that I am back in the gaming saddle, after a fashion, I figured it would be a good idea to take stock of where I am and why I am there. Previously I have mentioned that I have been undertaking a lot of reading and the thinking of great thoughts, scheming of great schemes and planning of great plans. Sort of.
Actually is is not hugely different from previously but it now has the benefit of some clarity of purpose. 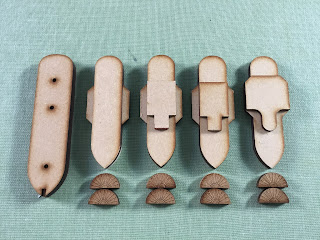 Five more ships for the Confederates. The ‘sun ray’ effect on the paddle boxes is etched into the MDF although I have deepened the lines to take paint better.
ACW is ‘front and centre’ once again. Work has resumed on the remaining ships for the collection and alongside of this will be the redrafting of the naval rules into a more reader friendly format. I also have the small matter of penning an article for the Naval Wargames Society about, you’ve guessed it, my ACW ships and how they got there. In truth I feel positively energised about all three of these so let the creating (re)commence!
On the subject of the ACW there is something for the land side in the offing that will work really nicely with the ships. I will say no more at this time and in truth it is a way off yet but it will serve to complete the ACW collection. 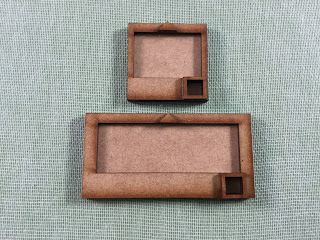 The new version of the bases will not have a square hole in the base that would have been framed by a dice frame. I shall be using solely a dice frame for the d6.
Due to my draftsman skills being somewhat lacking, the revised sample order from Warbases for my block army movement bases is not quite correct but in truth it has done me a favour as I have been able to further revise them into something far simpler. Essentially I shall be losing the small square hole on the base as the depth of a dice frame will be more than sufficient to hold a small d6. I have a number of actions I want to fight once I have these ready so when the revised designs are back I can make some definitive plans. No details as yet but suffice it to say the Portable Wargame will have centre stage.
My thoughts around skirmish games have moved in numerous directions and the only decision I have reached is that the forces will be around a dozen or so figures a side. The rules from Wiley Games - the ‘Fistful’ series - absolutely tick all the boxes for me in terms of mechanics and ‘flavour’. The jury is out but I have a hankering to tackle the various ideas I have in a larger scale than normal - 40mm or larger, just for the fun of it as I fancying a painting challenge!
On the subject of larger scales I forgot to mention about the selection I picked up at a boot sale some weeks ago. I had seen a couple of painted samples of these on a Facebook group  and thought they looked rather nice so I was very pleased to pick up three packs of these, each of which contained around 25 figures so I have a nice selection (too many really) to work with. They are obviously Sci-Fi and are roughly 45mm. I just need to source some opposition but needless to say I have a couple of ideas floating around.
The Crusades are a slow burner in whatever shape I decide to tackle them - as a cheap source of material I have a whole pile of Risk: Medieval figures which could be pressed into service. I am very much at the occasional reading and research phase for this so it will not be happening anytime soon.
So, in closing, I am once again rummaging around in the swampy bayous of the Confederate South - looking forward with renewed vigour.
For now anyway!
Posted by David Crook at 17:06

Good to have you back mate, though as you go up in scale I seem to be going down! Those sci fi troopers look to be good value - you always seem to have an eye for a bargain!

Thank you old chap although I prefer to think of myself as having been lurking in the wings waiting for my cue!

I rather like the idea of larger scale figures for small scale skirmishes but I would say that it is not a full blown definitive idea at this stage - merely my pondering of a particularly whimsical flight of fancy.

The figures look good though and I am rather taken with the trooper armed with Schwarznegger-ish sized mini gun!

Hurrah!…
Your back and straight into butterfly mode…😁
I love the sci-fi army men …

Thank you old chap and yes, the butterfly has taken flight once again....

The Sci-Fi figures are rather nice - I like the weapon selection that is available - and I have been thinking about some suitable opposition. Wargames Atlantic giant spiders may be an option.