Gently Easing Back Into Things 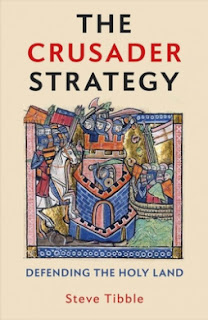 An excellent companion to the author's title on Crusader Armies

It has been a challenging time at Maison Crook for a variety of reasons, most of which have been mentioned previously. As the initial shock of the 'triple-whammy' has now subsided somewhat to more manageable levels so we have been able to take stock of what has happened and the implications going forwards. Make no mistake, none of the outcomes are particularly appealing but at least we are now better placed to plan accordingly and so can resume what passes for normal life in our neck of the woods.

I should also say that all the messages and emails received have been enormously appreciated and I thank each and everyone of you for taking the time to do so.

I will not go into details about all of it but the one positive is that we finally have a diagnosis for the affliction that has been troubling Laurel for some years and with increasing severity. She will require a surgical procedure, possibly two depending on whether or not the first one works, and this is likely to be in the next month or so. It is a serious condition and with potentially dire consequences if left hence the urgency. It will not be pleasant - surgical procedures rarely are - but at least it is progress and hopefully a light at the end of the proverbial tunnel. In any event, at least we now know what we are dealing with.

Now that we have sort of come to terms with the various travails that are besetting us I have at last been able to clear some all important head space. From a practical perspective it means that I will some capacity to tackle some gaming related bits and pieces - especially now that I shall be reactivating the lounge based work station - at Laurel's suggestion I might add - that I used to have prior to when we decorated. I am delighted about this as it means that I can resume work on the ACW ships rather more conveniently than being exiled to the man cave. I hope to get this set up over the weekend. I have also been able to make some rather better decisions about the grand disposal I was planning. This will still go ahead but on a rather more modest scale.

The 28th of September was of course my birthday (again, many thanks for all the good wishes) and this year, perhaps due to the deluge of adversity we have been dealing with, as a family we may a great day of it. Of immediate interest I received some £65 of Amazon gift cards which are always most welcome and I have already invested some of the balance.

The big 'retainer' of my planned disposal concerns the Crusades. Despite having disposed of a couple of books from this part of the library I have decided to persevere with the period and so have in mind a couple of ideas to play around with in due course. Rather embarrassingly and as a result of this decision I needed to replace one of the books that I had disposed of - Crusader Armies by the author of the book pictured above.

I should be taking delivery of the revised movement trays for the block armies soon so I shall ready these and post on the blog in due course. I want to get then painted first of all before doing so, to capture the full effect.

There is also the small matter of finishing the write up of the ACW naval rules and an article I am penning for the Naval Wargames Society.

My head is in a far better place now and I feel far more inclined to spend time on gaming stuff which should prove to be a welcome distraction. It is good to be back!

It’s good that you have some clarity over the way forward now David. Even if it isn’t going to be easy. All the best, and many happy returns.

And very good to have you back too!

First and foremost fingers crossed that it all goes well for Laurel with regards to the op. Awaiting a diagnosis is always the worst part based upon my experience. Once you know the path/s before you, it is easier as you know where you're going. Although it may not be easy, at least it allows all to focus on what lies ahead. Again, fingers crossed for all concerned.

Hard to believe but three years ago today I received my prostate cancer diagnosis. Luckily I was still working and so was able to be treated privately very quickly compared to an uncertain wait on the NHS, the latter being the worst thing. Touch wood I'm still cancer free and certainly making the most of each day, as it does tend to focus one's mind.

If you are going dow; the Crusader path, I’d be interested to see any PW rules that you might devise.

Uncertainty or the unknown is always the mind killer so knowing what you are dealing with is always a good move.

The birthday was a welcome distraction for the family and thank you for your good wishes - they are much appreciated.

Thank you old chap - it was the 28th but your best wishes are much appreciated!

It will probably be slightly lower key than usual but it does feel good having a little more time for stuff.

Multiple projects? Bring it on slowly I say....

Thank you Steve for your very kind comments - it really means a lot.

I did not know about the PC you had and it is something I have to be mindful of as my father died of the same meaning I have a higher than normal chance of getting it. It is great news that you are clear of this and long may it remain so!

Cheers old chap! I hope all is well with you and yours - now that the travel restrictions are easing are you likely to be in the UK anytime soon?

The Crusades are a way off yet but I am certain that a PW variant would work really well and yes, it is on my long distance 'to do' list!

I’m glad to hear that you are starting to see some direction and focus…
Knowing what you are up against allows you to… if not plan but certainly start to form a shape of what to do as things move forward.
Nice to see you getting back into the hobby saddle… however gently.

It is very much a case of cautiously creeping towards the light at the end of the tunnel in many ways! It is good to have spare head space for my own stuff though for sure!

Glad to see that things are looking up, and best of luck going forward. I am looking forward to you ACW Naval rules, and crusader project.

Welcome back David, belated happy birthday, and of course, and most importantly, I do hope all goes well for Laurel.
Looking forward to your further adventures in ACW Naval, Crusades or whatever takes your fancy!

Thank you old chap! It is early days adjusting to what is going on but the initial storm has been weathered. Work will be resuming on the ACW ships and rules soon. The Crusades are a while away yet though.

Thank you old chap - on all fronts! The ACW project will be the first priority but the Crusades are a while away yet - I am just at the research and reading phase for now and even that is pretty low key.

Wishing you and yours all the best, David -
When real life come a-calling it is often hard to get back to the fantasy worlds we like to live in, even when we feel like it.
Regards,
Ion

Thank you old chap and ain’t that the truth!