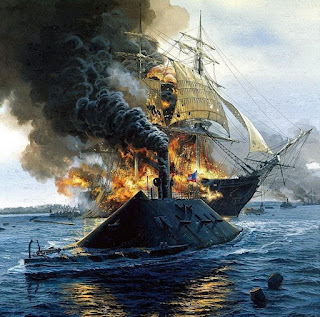 It is hard to believe that it was just over a year ago that I put up the first post showing the construction of the original batch of ACW ships. If you are keen to to do then you can read about it here. Over the course of the year I have successfully completed over fifty models - probably more when you take into consideration the various rebuilds that have taken place - and have not yet finished. Under construction are a further nine models and then I will need to furnish some mortar rafts, tugs and barges in order to complete the collection. The supporting rules have been solo play tested and so the next stage will be to unleash them on some unsuspecting live players. I need to organise a larger playing surface as well as building some terrain pieces to go with the collection but overall it is in pretty good shape.

There is nothing new or groundbreaking in this post but as I have just drafted an article for a journal about the collection I thought it would be fun to share the new pictures of what has been built so far. It was quite inspiring taking these out of the storage boxes once again and posing them. It has also served to give me a not so gentle nudge in respect of finishing the models that are currently under construction! 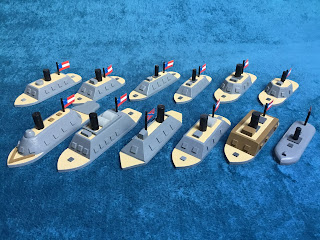 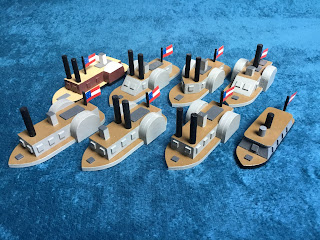 Confederate river paddle steamers with the exception of the C.S.S. Little Rebel bottom right (she was screw propelled) 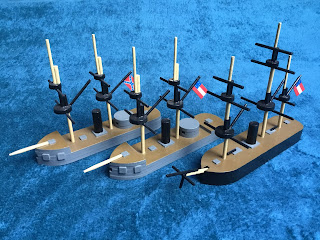 A brace of C.S.S. Stonewalls (I cheated slightly and gave them a turret rather than a gun house a la H.M.S. Wyvern) and a commerce raider 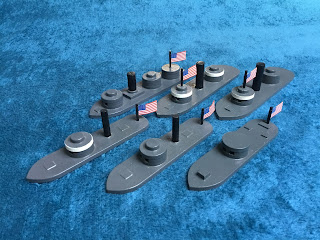 Union monitors with the original U.S.S. Monitor at the bottom right 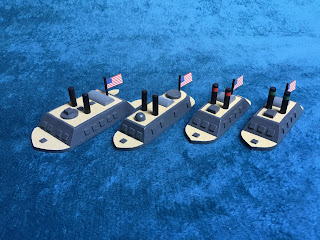 A selection of Union river ironclads - from left to right the U.S.S. Benton, Essex, Carondelet and the Louisville 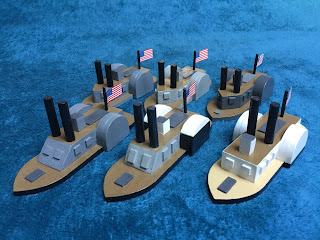 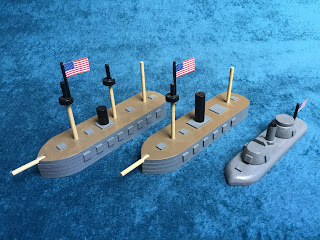 Union ironclads from left to right the U.S.S. New Ironsides, Galena and the rather odd looking and short lived Keokuk 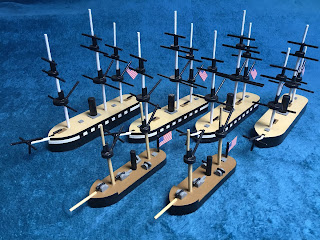 Union navy old and new. A Frigate and two sloops (black and white with gunports) with a newer sloop on the right based on the U.S.S. Kearsage and a pair of 90 day gunboats in the foreground.

I have to say that seeing all this lot again after having boxed most of them up was a pleasing experience and it certainly has given me the jolt I needed to crack on with the remaining models. I also need to think rather more seriously about about the playing ares I will be using. The cloth they are sitting on used to be a ‘throw’ that my daughter used in her accommodation when she was at University. I am thinking of adding white self adhesive ‘dots’ to form the grid as this will be less intrusive.

As ever, much to think about but at least my head is a lot clearer than it has been recently!

What a fine collection that is!

Many thanks old chap! An email will be forthcoming but I have one thing to observe about your recent post - Kantsi Strait? I assume that visibility was at a premium!

Blimey, is it really a year ago that you kicked this project off? How time flies by when you're having fun! Great to see a fleet review of all the models again which really do look impressive. Keep up the good work old chap!

Hard to pick, but I think my faves are the stonewalls. How about you?

It really has been a hell of year for sure! I had to take some pictures to go with the article so it was a real treat to be able to get he models out once again. It has certainly given me the spark to be able to get the next batch finished!

I am glad you liked them!

Hello there Jolly Brum Man (did you see what I did there?),

I was rather pleased with the C.S.S. Virginia and the U.S.S. Essex. Both of these involved shaping curved casemates which was a challenge to get right but they do look rather good imho! Also anything with masts - especially the Union blue water old navy types.

I could go on but suspect that may not be a wise move....

A splendid regatta David…
I am looking forward to seeing this collection develop further… and take to the rivers and high seas.

I must confess it gave me quite a boost seeing all this lot again after what seemed like quite a while (it wasn’t really - a matter of a few weeks only). The remaining models will help to round out and balance the collection so I am keen to push on with them.

You have been busy DC, that's quite a force that you have mustered, and very good they look too.

David
Nothing like a parade to provide some motivation. That really is a nice collection of ships - you’ve done a first class job on these.

It was like saying hello to an old friend when I got them back of the boxes!

Thank you old chap! They passed the ‘first look after having been tucked away’ test and as you rightly say, a parade certainly provides some motivation!