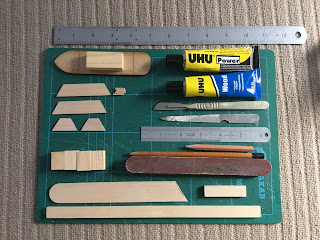 The tools of the trade and yes, the model you see under construction really is 5” long....

As you would have seen in my previous post I have had a play around with some further designs which are now with Warbases. The version posted yesterday had a couple of changes applied to it - the central battery portion was rather too central so I moved it along a 1/4” and it made a lot of difference. The one thing that I have a found a real challenge is avoiding following a particular design too closely. There are many variations of this type of warship so I wanted to strike an average. I have really enjoyed the process and am looking forward to tackling them for some large scale ironclads action. 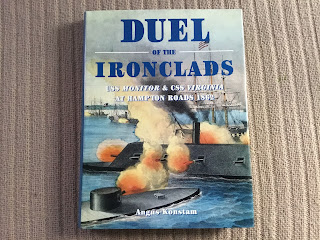 A very useful Osprey hardback by the prolific Angus Konstam. The title includes the Vanguard titles Union Monitor and Confederate Ironclad as well as the Campaign title on Hampton Roads.

In the meantime though, there is the ACW. Again, this will not be strictly accurate but I wanted to field representative forces for both sides and now that I have the turret issue tackled first up would be Monitors. Actually I decided to tackle the Confederate casemate ironclads first of all, mainly because they are rather more work to build than the Monitors will be.

For this stage I shall be building six ships. The Union will get a double turreted Monitor and two smaller single turreted versions. The Confederates will be getting a large Casemate Ironclad and two smaller versions. I will then build another half a dozen models that can serve for both sides as required - generic looking vessels based on whatever takes my fancy and is easy enough to build!

The ACW games I am planning will be hex based and I have a copy of the playing mat sold by Peter Pig for their very successful Hammerin’ Iron ACW naval system. I don’t why but I got into my head that the hexes were 5.5” across the flat sides - hence my opting to a 5” hull size - when in actual fact they are 4.5”!

It measles there will be a little overhang on the hex but it will not be too serious. When I start making ships with a bowsprit it may be a different matter but I will fall off that particular bridge when I get to it.

By way of some advance warning my next post will be fairly significant - well for me anyway - as I have decided on a course of action that I really should have addressed years ago.

Ah, the joys of scratchbuilding! I just love seeing stuff like this:). What rules will you be using David out of interest? Bob Cordery's naval rules appeal to me but as with many things, I've yet to give them a try.

The first ship is probably around halfway there and so will be ready in a couple of days or so. After the great ship building frenzy of a few years ago I found that I needed to relearn a few techniques as well as upscaling them for the larger models. It is all coming together well enough though. I shall build the two additional Confederate casemate ironclads first (to go with the one currently under construction) and then the three Union monitors. I will then tackle the half a dozen generic types to finish off the collection although I am also planning some spar torpedo boats and possibly even the odd submersible for fun.

One thing I am not doing though - and this is a first for me - will be basing the models.

My first port of call on the rules front will be Bob’s Gridded Naval Wargames although the version I will be using is that of Mr Fox. I have a few other ideas to play around with though. I am looking forward to using the Hammerin’ Iron gaming mat - it looks rather good.

I have to say that I am really enjoying this!