The Mist is Slowly Clearing 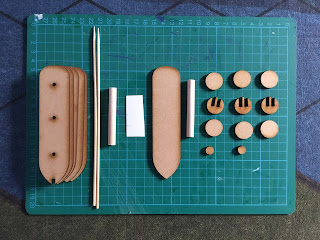 Can you tell what it is yet? There are two models to be built from the selection of bits and pieces you see above - both for the Union.

As a result of an email exchange with Bob Cordery and a blog comment from Archduke Piccolo my thought process has been set happily back on track in respect of the rule tweaks I have been experimenting with.

In the first instance Bob drew my attention to the ship section in his recent book The Portable Colonial Wargame - a title I had completely overlooked! In this Bob outlined the formula he used for calculating ship flotation values which takes into consideration length, breadth, construction material and level of protection. This is really helpful although I have sneaked in a further construction method. Bob used a factor of 0.25 for wooden ships and 0.50 for Iron/Steel ships. I added in 0.375 for those vessels that used wood and metal for construction. Using two of my models as guinea pigs I was able to come up with the following hit points.

I think that is a fair representation between the two types so this would ordinarily be the standard I would use for calculating Flotation Points except for one crucial area. If I opted to use this as well as allowing for the effects of gun weight versus armour type I believe that I would in effect be counting the defensive capability twice.

With this mind I have dropped the armour modifier to Bob’s formula. This has the effect of bringing the flotation point totals in the above examples to 12.5 or 12 for the monitor and 9.375 or 9 for the casemate ironclad. To allow for the protection value of the armour a damage roll is made following a successful hit.

Archduke Piccolo with his comment nudged me a little further along a direction I had been seriously considering but had not explored fully. I am going to use a very simple firing method in that each gun rolls a single d6 to hit the target and having done so the target ship rolls for the effect of the said hit. There are three range brackets - short, medium and long with the scores required to hit the target being 4, 5 or at short range, 5 or 6 at medium and a 6 at long range. There will be situational modifiers as well as an allowance for using rifled weapons. Once a hit or hits have been scored then the effect rolls are made. The damage table is very simple in that 1 through 3 are misses, 4 and 5 are a single damage point and a 6 or more is two damage points. This is the standard damage template that Bob used in Gridded Naval Wargames.

To represent the effect of armour the following modifiers are applied to the damage effect rolls.

A light gun rolls as per the standard table when engaging light armour but gains a minus 1 when firing at medium armour and minus 2 when firing at heavy armour.

All guns firing at an unarmoured target will score as follows: 2 through 5 equals one point of damage and 6 equals 2 points.

In all damage rolls a natural 1 is always no effect and a natural 6 is always the usual 2 damage points unless there is an applicable negative modifier in which case it drops to a single damage point.

The above system is something I have used before with a set of Pre dreadnought rules so I know it works satisfactorily.

I will need to test this further and so will organise a further action for later in the week. In the meantime though, I have the small matter of getting a couple of new ships built.

This all sounds emminently sensible David and I too had forgotten about the ships rules in Bob's book! Looking forward to seeing how these latest ideas play out.

For sure it was embarrassing! I am very pleased that Bob pointed me at them though as it has given me something to anchor the flotation points to. I think I may be just about there - which of course I will not be - with the core system but will need another couple of tests to be sure. I also need to make some other ship types as well (and not the two that are currently on the cutting mat!

This is all developing apace David. I shall have to increase the measurement of my 1/1200 ships by 2.5 which gives the same or similar flotation points as yours.
Thank you for introducing me to David Manley's solo campaign rules. I started one and it developed just like one of the many river battles I have read about. Unfortunately some of the first encounters involved land batteries which I think I made too powerful and I could see there being only a weak Union fleet coming up against the Confederate ironclad. I don't like changing rules on the basis of one game so will try a few more.
Soory I don't have helpful suggestions to make but I look forward to your next post.
Best wishes
Jim

I have to say that I am thoroughly enjoying the process with this and I think that I may be about there. I have run another play test using the ideas mentioned in the earlier post and it worked out really well.

In a nutshell you had a monitor and a casemate ironclad circling each other and scoring the occasional hit. Both sides were getting worn down but the key thing for me was that the pace of the action felt right. I need to try it with some other ship types but early signs are really encouraging.

David Manley’s works are always well considered and tested and he really knows his stuff. Even if you do not use his rules the material he has collated is always very useful indeed.

Hi David -
This is proving to be a most interesting series of articles. When you mentioned the 'wood/iron construction' thing my first thought was 'Cairo' class gunboats, but then realised you meant iron armour with wooden backing.
The 'Cairo' vessels were sort of half-ironclads, which might necessitate special rules if ever they form part of your inventory.

As you are doing, I also decided in my adaptation of KEV's rules, that as the weight (or size) of the vessel was significantly affected by the armour it carried, that would determine its durability (flotation). However, in THAT rule set, I am very close to changing my mind, although adding in a factor for 'belt armour' increases the flotation only by 25% approximately. (I guess it's not really a 'factor' in any arithmetical sense as the modifier would be added, not multiplied).

I guess I'd probably be inclined to keep Bob's armour multiplier, but as always, it's 'suck it and see' country. What 'feels' right (in action) 'is' right!
Cheers,
Ion

I would like to add a Cairo or two to the inventory - I built the entire class years back, along with Essex and Benton - but have not gotten to them yet. Sine the turret idea has worked so well I keep thinking about more monitors although I plan to add one or two of the Turret ships being built for the Rebels but ended up servicing in the Royal Navy.

Bob’s formula works well in conjunction with his firing system as the damage to protection ratio feels right - more damage closer in, that kind of thing - but if you layer in the provision for gun/armour effects based on single guns it gives ships increased longevity. I take your point about the armour effecting the overall weight/durability so using Bob’s formula with a smaller adjustment may be in order. I will think about it but fr now I need to spend some time ship building.

Many thanks for your comments - you have certainly given me something to think about!