Something Wicked this way comes....again! 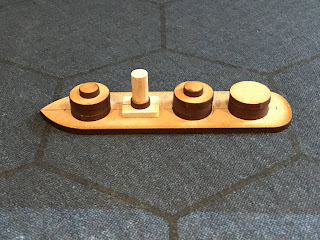 The U.S.S. Potomac - newly commissioned and awaiting her paintwork

A rather better representation of the original U.S.S. Roanoke

Despite my avowed intention to avoid where possible building actual ship models as opposed to representative types the temptation to build the model you see above was more than mortal man could endure. Under normal circumstances I would not have dreamed of building such a monster but given that I am enjoying building anything with a turret at present (I am really looking forward to the pre dreadnought part of this project) it seemed rude not to.

With this in mind I present the U.S.S. Potomac based on the U.S.S. Roanoke. The original ship was a sister of the C.S.S. Virginia of Hampton Roads fame and although their paths never crossed after their respective conversions it is fascinating to speculate how they would have fared against one another.

The model is ‘based upon’ rather than super detailed and took me around twenty minutes to build. I am rather taken with it and it will become the flagship of the monitor fleet under the command of Rear Admiral Douglas Mortimer who, now that his teeth have been attended to, is eager to get back into action.

I have one other monitor to build to complete this part of the collection and it will be a single turreted version. I have the U.S.S. New Ironsides on the stocks to build and am still mulling over the next three Rebel ships. I have in mind an idea for at least one and am also thinking about some small ironclads. Once this phase of the build is complete I shall be looking at gunboats and various permutations of paddle driven types.

It is great fun building these though and I am thoroughly enjoying myself!

Excellent work! She has Flagship potential for sure.
I like your reference to House of Cards (UK Series) in the previous comments - a fine series and so apt.

Many thanks old chap and a good spot re the quote! The ship historically was not a great success so I hope that version I have built has rather more!

A very impressive model ... and not a ship one would like to face in reasonable deep water. (I seem to remember that she had quite deep draught due to her being a conversion rather than scratch built.)

Cheers old chap! I am sure she seemed like a good idea at the time - originally she was going to have four turrets - but the technology was not really up to it. The strain on the hull was huge which caused a degree of sagging. She spent the war as a guard ship at Hampton Roads but I really wanted to make a model of her!

She will certainly be seeing active service under the command of Rear Admiral Douglas Mortimer!

Oh that looks so good already:). Can't wait to see it painted, flagged up and in action.

Two out of three I can do easily enough - painted and in action no problem - but the flags will take a while.

She is a beast for sure!

Hi David -
Until now, I had never heard of USS Roanoke - or any 3-turret monitors. But the moment I saw the pic I wondered what would have happened had she fired a full broadside abeam at 3 or 9 o'clock. I suppose its huge draught would have been enough to stop her turning turtle. Did she ever fire her guns in anger?
Cheers,
Ion

She never fired her guns in anger but when they test fired them three out of the six were dismounted due to excessive recoil! Also only the first two turrets were powered - the aft turret took a full 5 minuted to rotate!

A mad looking ship for sure - believe it or not it was supposed to have four turrets....