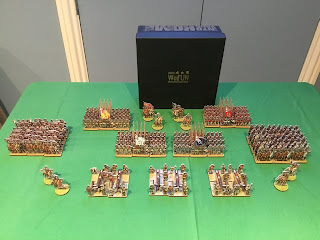 In all its glory - 4 x 48 figure foot regiments (using one pike to two shot), 2 x 18 figure cavalry units, 6 guns and crews and a selection of 8 command style bases/personalities. 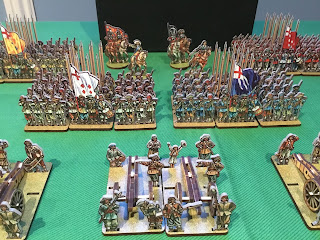 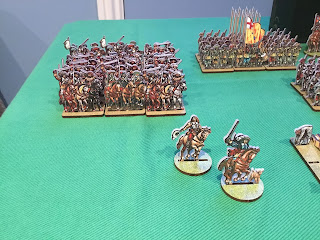 Prince Rupert (yes, he has his dog with him!) and the Cavaliers 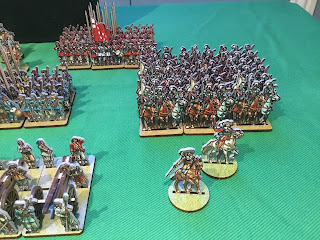 This was definitely not the post I thought I would be writing but in a way it is relevant to it! Aside from sealing the sole Confederate casemate ironclad I had built today has been taken up with work and some time with a new arrival to the collection. This particular new arrival is something of profound significance for me - mainly due to its relevance with the content of the as yet to published other blog post!

Today I took delivery of a 28mm scale WoFun English Civil war starter set - the entire contents of the box you see in the rather glorious series of pictures at the head of this post.

It probably took me around an hour to get this lot assembled and posed for the pictures. That is from the box to the table. Let that sink in for a moment.

The figures are die cut so all one has to do is to pop them out and place them in a base - it really is that simple. The artillery needs a little work and needs to be glued together really as they are a little on the flimsy side. A couple of the figures had cracked but Lucian at Wofun (actually Mr WoFun himself) will happily replace then as well as the incorrect cavalry I received. I learned early on that it is possible to break the sprue around the figure which makes it even easier to get them out (not that it is had in any event) and when placing the figure in a base to lightly sand the locating lug at the figure base for an easier fit and apply the pressure only on the figure where the jug is. It is really easy though.

A really important consideration with these is that the table footprint is very small. The 28mm range uses a base of 40mm by 30mm and typically has two rows of figures - 8 foot and 6 mounted. You really get a good mass effect using this system and for me it means that you can fit four bases of figures in a 4” hex.

For rules I have a number of options and I know that there are a couple of good Portable Wargame variants, Neil Thomas and his One Hour Wargames, Andy Callan’s rules that come with the set or indeed, many others that I will need to explore - which will be fun.

The first time I saw the paper soldier range by Peter Dennis at Salute a few years ago (Andy Callan was in the chair running a very nice looking WSS game using them) - which are the descendants and contemporaries of the WoFun range I was really intrigued but never really fancied cutting them out and, to be honest, was concerned about the longevity of them. When WoFun starting producing essentially the same thing except on acrylic I was even more intrigued.

Andy Callan very kindly sent me a few Jacobite samples that have appeared previously on the blog and this served to raise my interest to infinity and beyond! I will not bore you with how this acquisition came about but suffice it to say I am extremely pleased with this entry level set up.

This concept is an absolute game changer for me. I do not have to think about painting figures and all of the associated mental baggage I seem to have with that particular facet of our hobby. Now I can plan, research and game in a visually impressive way - with Peter Dennis artwork as well!

Why the ECW? Well, this is a period of history that is one of those I have always liked the look of but had no inclination to raise any armies for it - the painting issue once again. I have kept a small selection of books about the period for many years and of course, Nick Lipscombe’s latest atlas has served to bring the  whole thing to a head of steam. To be honest, it is the difference that attracted me - the difference from anything else I have been gaming over recent years.

Will I expand the collection? Absolutely! Will I look at other periods from the same manufacturer (the Spanish Armada is coming as well as the War of the Roses)? Hell yes! Will I ever buy anymore figures to torment myself and bore the life out of you when I go on about hating painting? Nope, not anymore!

Block armies, board games and Wofun are the way forward for me now - that and scratch built warships, which I shall be back with tomorrow.

All in all then, it has been a very good day!

My grateful thanks to Andy Callan for ‘showing me the way’.

An hour from box to the table? That is almost impossible to beat! Command & Colours may come close but I think sticking all the labels would take more than an hour. They look very impressive and the base size is not too big, allowing games to be played on smaller tables.

Are you going to paint the bases and/or add flock? I can see these woring equally well with traditonal terrain or more simplistic 2D terrain.

Whatever you do I think they will look great in action and I look forward to the first AAR. Have fun!

Those do look very nice indeed. Not having to cut them out yourself is also a huge bonus.

Actually it was around the 58 minute mark BUT that was with me assembling the artillery straight out of the box. Going forward I will be gluing the guns for a sturdier finish so allow and hour and a quarter!

These are the 28mm versions but I suspect it may be slightly longer with the 18mm for two reasons. Firstly you get a lot more figures for the price of the 28mms and secondly, as they are smaller you would definitely need to be more careful breaking the figures out from their sprues.

Whichever way you look at it that is still very quick!

I had not thought about the bases - they look pretty good in may opinion as they are - but I suspect a coat of flock would enhance the appearance. I also know that some users have inked in the edges of the figures although that is not something i would do as it would be quite fiddly. I will be using 3D terrain but may well consider something 2D in due course. As it stands I would not really need very much - perhaps a couple of farm style cottages - so it would not be difficult to organise.

It was certainly a lot quicker than sticking labels!

I am spoilt for choice for a game at present but using these would certainly be a temptation!

Meanwhile, back to the ironclads!

It was the cutting them out that always put me off the paper versions as it would be hugely laborious and I would always be worried about how long they would last!

In some 45 or more years of wargaming I have never gotten an army ready to fight so quickly!

Very good indeed David, they look amazing. Like you I have been following the development of the Wo Fun products, they have certainly hit the sweet spot here. Interesting what you say re popping the plexiglass (?) figures out, must have been a bit tricky with those pikes? Not cheap though are they in 28mm, but given the ability to put two complete armies on the table in an hour well worth it. Where do they ship from and what is the rough delivery period? Great photos!

I am really pleased with these and being that i really dislike painting figures they are a very practical solution for me. They ship from Eastern Europe which will be an issue post Brexit as I reckon that shipping will become more expensive. As they are run off to order I reckon two or three weeks or so would be about right although I could be wrong as mine came via a UK source.

The general consensus is that the 18mm version represent better value as I believe you get roughly double the number of figures compared to the 28mms. I opted for the larger size purely because I had seen them in action at salute a few years ago (actually the Peter Dennis paper versions) and was immediately taken by them. The footprint per base is really small - 40mm by 30mm and on this you get 8 foot or 6 mounted in two rows - so they translate into C and C or PW units within a 4” grid area really well.

Oddly enough the pikes were the easiest of the bases to pop out - the only issues I had were with Musketeers feet!

It is no exaggeration to say that this concept has rewritten the gaming rule book for me and I fully intend exploring the range in more detail.

The pictures were taken on my IPad and they came out rather well - mind you when the subject is Peter Dennis artwork it is easy to get a good shot!

The War of the Roses is in the pipeline!

I can only say 'ooh, shiny!'. Very tempting, but which period? I feel some mission creep coming on..

‘Ooh Shiny!’ Indeed! My immediate priority is to complete the ECW collection which in my case does not really need very much at all. Then I need to think about an alternate period. I would be tempted by the Scottish theatre for the civil war but I really want something that will be different.

In the meantime though, I will need to crack on with organising my disposals to finance it all!

Oh, David, this could be a game changer for those "projects" you want to do but don't have the stamina, time or expense for huge metals

You may have found a wargaming Nirvana here

That is the way I am seeing it. Funnily enough I still intend painting the odd figure here and there - mainly skirmish level stuff or in ‘figur game in a box’ environment. It is just for armies really.

For the record this has been a game changer for me!