Thoughts on the Missenhitti River 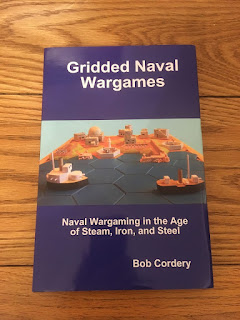 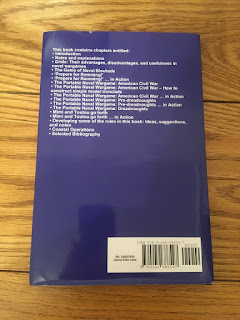 Well the inaugural action has been fought and there are plenty of positives to take from it, and a few things for me to work on going forwards.

This was the first game I have fought using my Hammerin’ Iron gaming mat and I was pleased at how it looked although it is a little darker than I would routinely use. As it represents a stylised stretch of river naturally the banks will play a part in reducing the area available but this is fine and certainly well suited to the majority of actions I shall be fighting. I used my MDF hills to add some variety but these are smaller than the hexes of the mat - 4” as opposed to 4 1/2” across the flat sides. I shall order some MDF hexes of the appropriate size for terrain purposes in due course. I will also look to make some shore batteries and forts etc but this is a way off as I want to focus on the ships for the time being.

I had planned originally to use a variant drafted by Mr Fox of the ACW set contained in Bob Cordery’s excellent Gridded Naval Wargames book but for the life of me I could not lay my hands on them! The rules I ended up using were my own spin on Bob’s original set which are very much a work in progress but showed a lot of potential.

There is much to be done with them but I am trying to stay as true to the original concepts as far as possible. The only amendments in place at this stage concerned movement - I increased the speed of both the monitors and the casemate ironclad from 1 to 2 - and firing.

The firing system I am working on takes elements from Andy Callan’s venerable set so that guns are rated as heavy, medium or light. Each gun rolls the number of d6 equal to its size so heavy weapons roll 3d6, medium roll 2d6 and light 1d6. Hits are scored in the normal way - 6 equals 2 points of damage, 4 or 5 equals 1 and 1, 2 and 3 are no effect. I allowed a reduction of the number of dice rolled depending on the range which varied according to the gun size. I used 6, 4 and 2 hexes being heavy, medium and light respectively but am looking to refine this. It worked well for this action but made for a speedy game.

At the conclusion of the game both the CSS Secessionist and the USS Hiawatha had but a single damage point remaining and were both required to break off the action. As a game outcome I have no problem with this at all but it seemed a little to easy to score telling damage. Given the close ranges that most of these actions were fought at I am satisfied that hitting the target would be easy enough. What I am less convinced of is that every hit will score damage - especially when dealing with fully armoured warships. Having said that, if a hit ‘found it’s way in’ then the outcome could be severe as ships of this vintage were not built with the damage control and safety features of later vessels. In many ways damage was ‘all or nothing’ when considering ironclads duking it out. I also believe that the old chestnut of the ‘critical hit’ is something that is hugely significant in this era as much of the technology was new, untried even and above all, fragile.

How would this be allowed for? I have a few ideas I am playing around with but have yet to fully develop. The main thing I want to do is to stay as close to the original rules as I can because I believe the core concepts are sound and work well. With this in mind the only immediate change to the firing process will be to categorise gun types on a given ship as heavy, medium or light and with their own dice roll.

I do not want to get involved with armour penetration tables - these would be inappropriate to the feel of the rules - but I do want to be able to reflect the effects of it when a ship is fired upon. The easiest way would be allow the target ship to have a saving throw. Say the firing ship scores hits with three dice. The target then rolls the same number of dice in an attempt to negate them. This will result in some, all or none getting through to cause any measurable damage. This would be a very simple fix. However, I am thinking about the wide variety of ship armour present - from fully armoured ironclads down to wooden and unarmoured civilian ships pressed into service, not to mention the various other ‘clads’ - tin, cotton and timber.

As far as critical hits are concerned I really want to avoid huge tables detailing every part of the ship’s anatomy. My thoughts at present are limited to hits affecting the following areas - bridge, power plant, steering and weaponry. I am also considering having ship specific damage points although using Bob’s ideas as the norm so some will be better or worse as research dictates.

All of these points are looking to add a degree of personalisation to the sship types within the broad categories listed in the book. The ACW from a naval perspective had such a diverse range of craft in use that I believe reflecting these differences is important. It is easy to add detail but the trick is to add in such a way that it stays true to the original concepts so as not to overbalance the rules.

It is a tribute to the strength of the core concepts of Bob’s rules that they can stand a fairly robust amount of tinkering without breaking!

I thoroughly enjoyed the game and am looking forward to both building more ships and also to developing the rules further to better reflect what I want from my games. I am satisfied that the ships look as I want them to and that this will be my build standard going forwards - easily offended purists look away now!

The rules have given me a solid foundation to work on and I am going to enjoy the process of honing them to suit my needs.

My thanks to Bob Cordery for not only excellent book and rules system but also for the priceless gift of the Missenhitti River.

....Also my apologies to Mr Fox for losing his version of the rules....D’oH!

It seems I was a bit late trying to say how enjoyable was your river battle report. I shall be interested to see how your amendments to Bob's rules work out and am sure you are right to avoid long tables of effects - this put me off a good set of rules I used a few times as the action slowed. I am not sure who 'Mr Fox' is but there was also a post on Derwentgamer's blog, last March I believe, which may be of interest. As always, I look forward to reading how things develop. Best wishes.

Thank you old chap - much appreciated! The main thing I want to achieve is to be able to model specific ship types within the rules but to stay as close as possible to the original. Mr Fox, a long time friend of mine, had tweaked Bob’s original rules and they had worked really well. They were still not quite what I wanted but were certainly a step in the right direction for me.

I will take a look at the blog so thanks for mentioning it.

An interesting read David on how you felt the game went and what you want from the rules, which is the most important thing. Bob's rules provide such a solid base for tinkering/tweaking, which speak svolumes IMHO.

As for ACW actions I know very little about them, but having recently been reading lots of ACW history, the idea of using Bob's rules alongside land actions is too tempting for a poor sould like me!

As you rightly say, Bob’s rules provide a really solid base to build upon and are robust enough to take any amount of tinkering. What I want to do is to tailor them to suit my own needs whilst remaining close to the original system.

There are no wholesale changes - except possibly one - just degrees of polishing.

I have used Bob’s rules (a forerunner of the Portable Wargame) for combined river based ACW games and they work very nicely indeed.

Have you considered a 2nd roll for critical damage if the original hit die is 6. Perhaps as simple as 1=dead in the water to 6=BOOM! Magazine explodes. Etc.

Or just add that as an effect of the 2nd die if thats not too.

My plans for critical hits will along similar lines to what you suggested - I do not want to get involved with anything too complex as it would not be in keeping with the spirit of the rules.